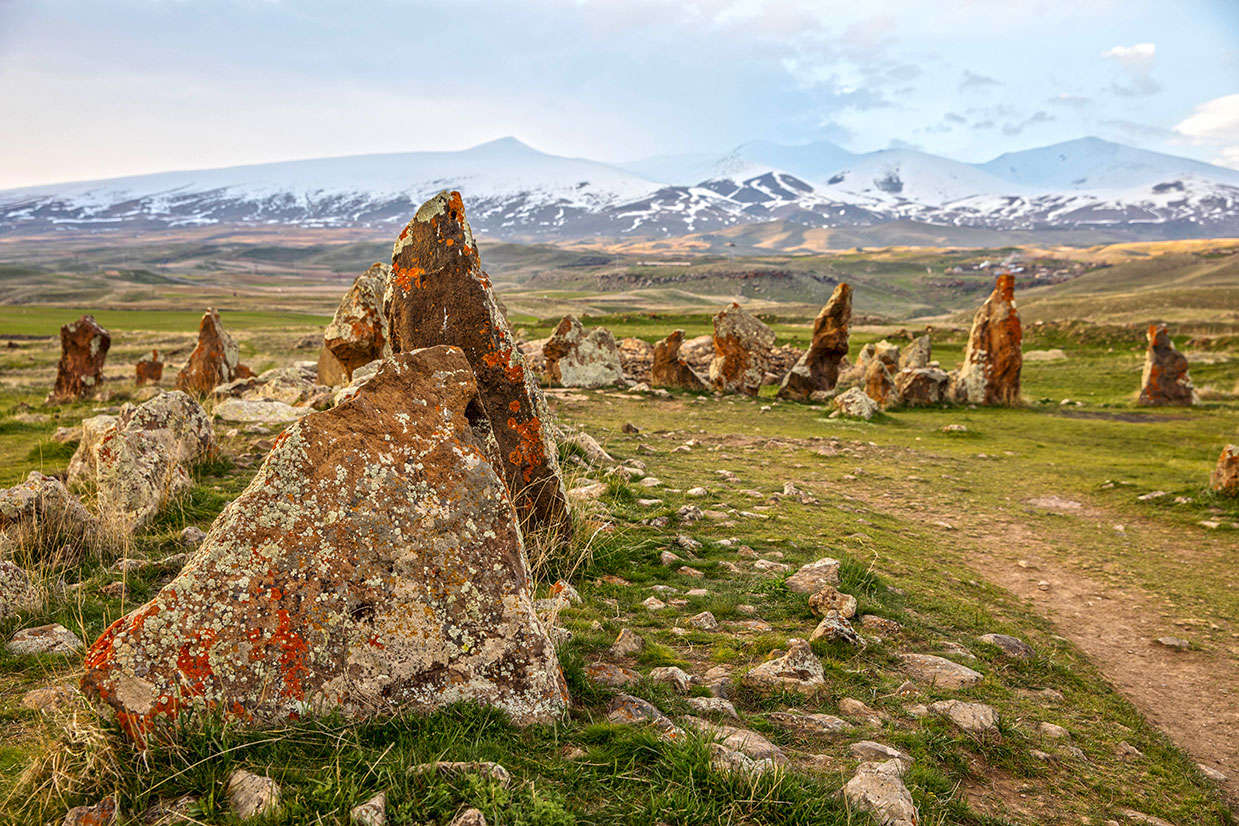 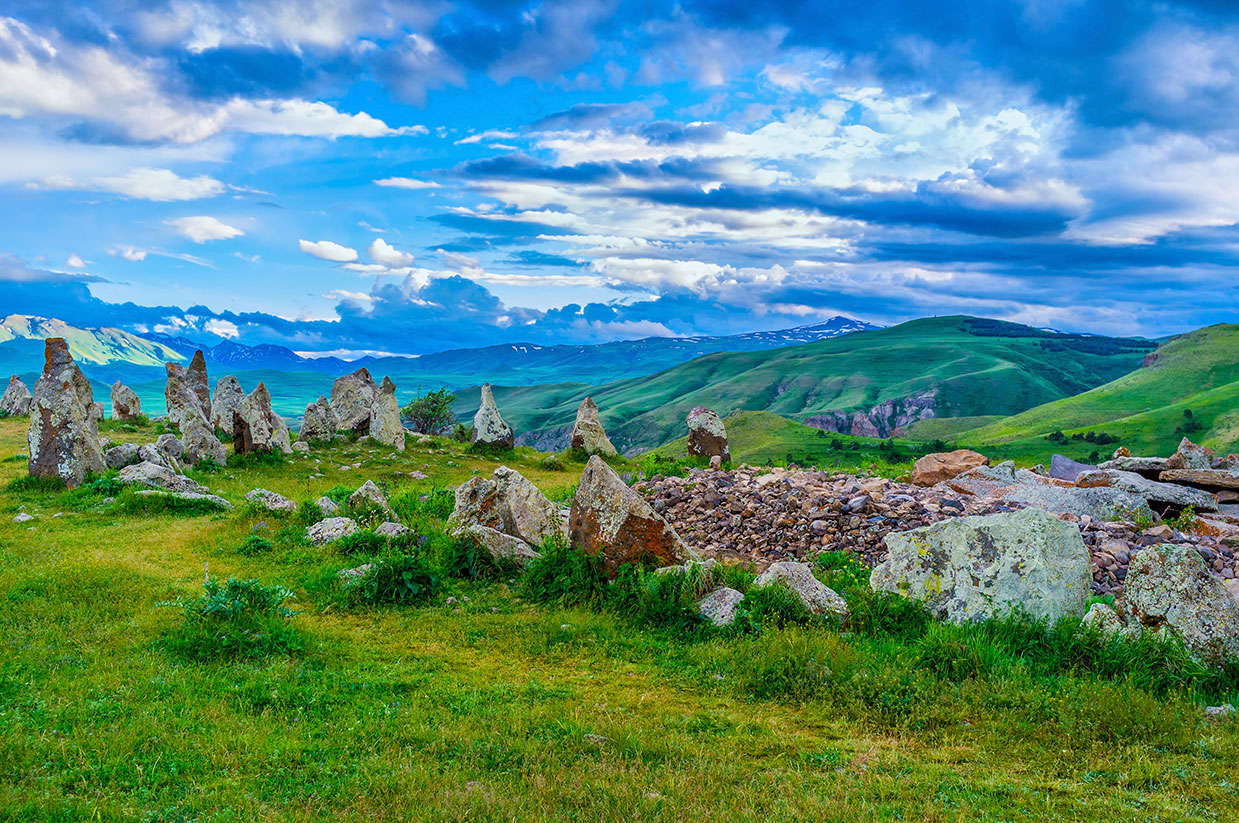 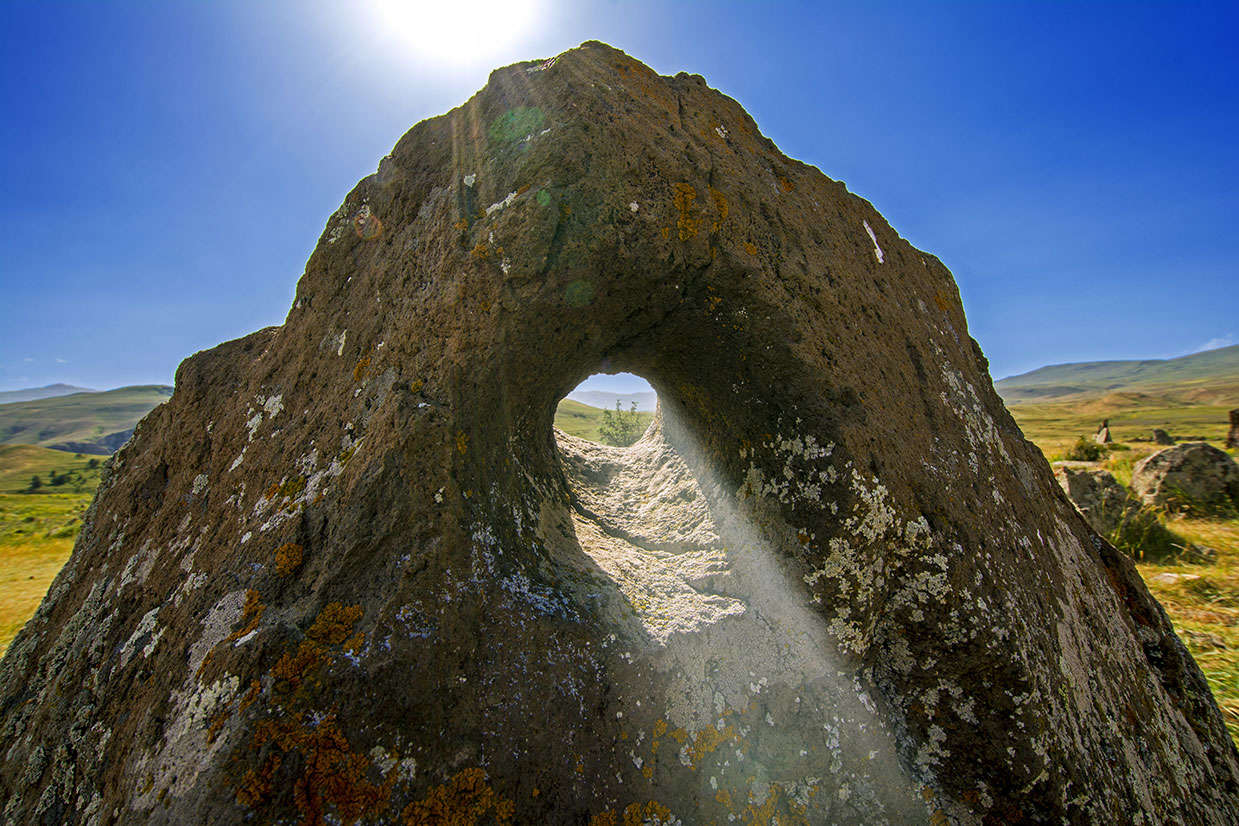 The megalithic complex Karahunj is located on the rugged plateau near Sisian. It is believed to be one of the oldest observatories in the world, according to some enthusiastic archaeologists. Also known as Zorats Karer, Karahunj is a huge complex dating back to the Bronze Age, which includes enormous and unique megalithic structures, more specifically graves and more than 220 menhirs (menhirs are tall upright stones). In 2004, the Armenian government passed a decision according to which the archaeological site was officially called Karahunj Observatory. No agreement has yet been reached on the dating and significance of Karahunj. Karahunj is said to have a history of 7,500 years. However, it is an indisputable fact that the complex with its structure is very similar to the monuments in Iceland, Ireland, Scotland and France. The most famous of these is Stonehenge in the UK. Many historians believe that there is a connection between the Armenian and the British monuments. And one very important thing to keep in mind is the dating of both monuments, as stated earlier, the Armenian Karahunj dates back to 7500 years, while the British Stonehenge has a history of only 4000 years.

Apart from that, studying the roots of the word Stonehenge has not revealed what "Henge" means, although "Stone" is clear to everyone. In this context, it should be said that in the word Karahunj "kar" means stone, while "hunj" is believed to be the replaced variant of "punj", which means "a bundle". Consequently, Karahunj means "a bundle of stones" in Armenian.

The site covers an area of 7 hectares. The graves are to the west, while to the east are the menhirs that form a circle (oval) with rows or "alleys" of stones that extend to the north, east, and west. There is a huge box grave west of the central menhirs. The 223 standing and lying stones measuring 250 meters in length cross the circle, while to the west of the central oval, there are more than 200 stone tombs. These standing and lying stones are divided into the central ring, the chord, the central avenue, the north side, the south side, and the northeast lane. Many of the stones contain holes with a diameter of 4-5 centimeters. The angles of these holes have different points. They are particularly focused on the horizon and space. Some archaeologists believe that the stones and the graves are from the same time, while others believe that they date back to different times with the stones that precede the tombs. The findings in the tombs are from the early Bronze Age, the graves are from the early or middle Bronze Age (2000-1800 BC).

The keystone of the complex is supposed to be from an earlier period. It is believed that stone # 137 has a carved periscope and is used to observe the stars directly above the complex. Much more serious than the conviction of the supporters of megalithic astronomy and thus far less spectacular is the hypothesis of the archaeologists from the Institute of Near Eastern Archeology of Munich: since in this area mighty stone tombs were found, this ensemble of erect stones is a necropolis of the Middle Bronze and Iron Age. The stones in a line, with round holes at their edges and the rock paintings, are supposed to be proof of the astrological knowledge of the indigenous people of the country. It is estimated that this observatory is 3,500 years older than the English "Stonehenge" and 3,000 years older than the pyramids in Egypt.