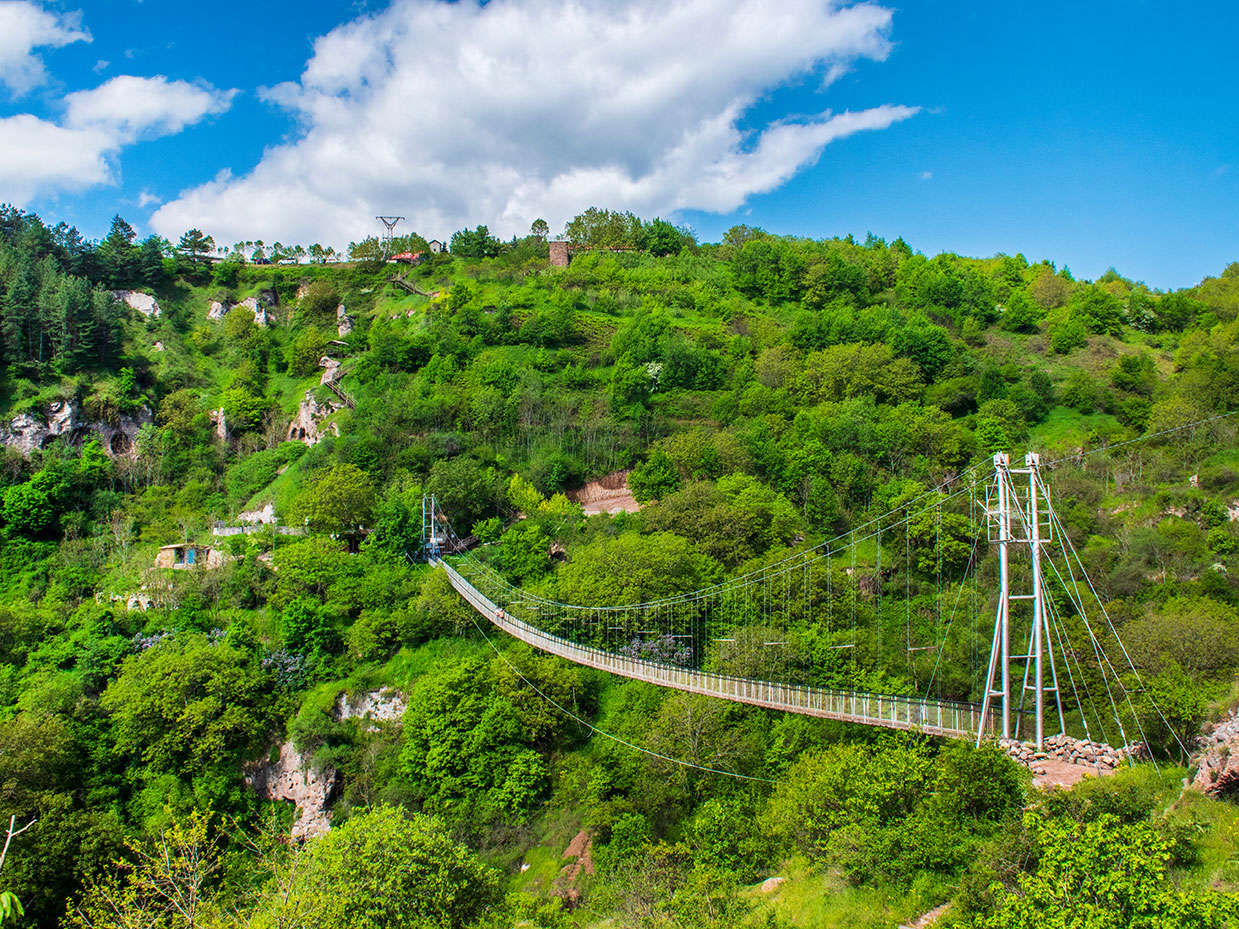 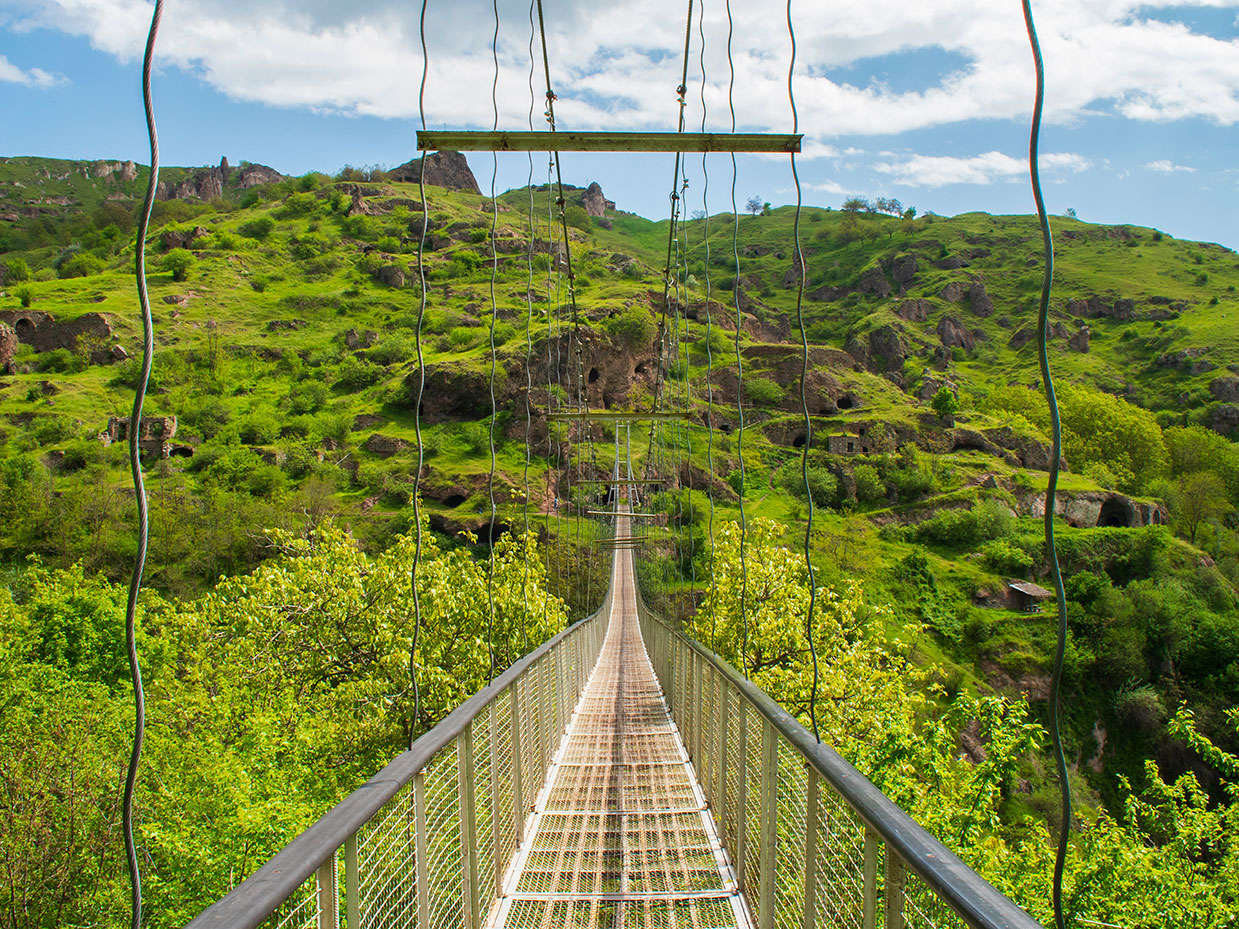 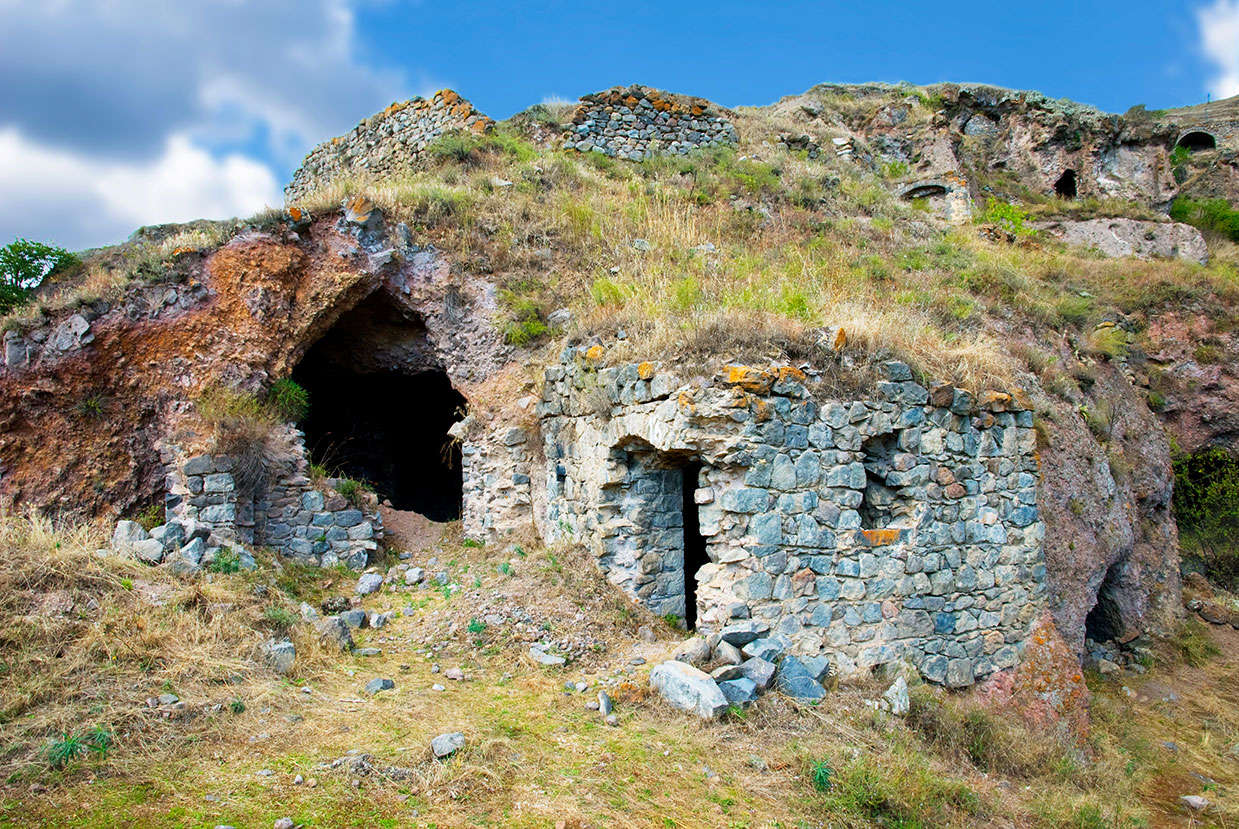 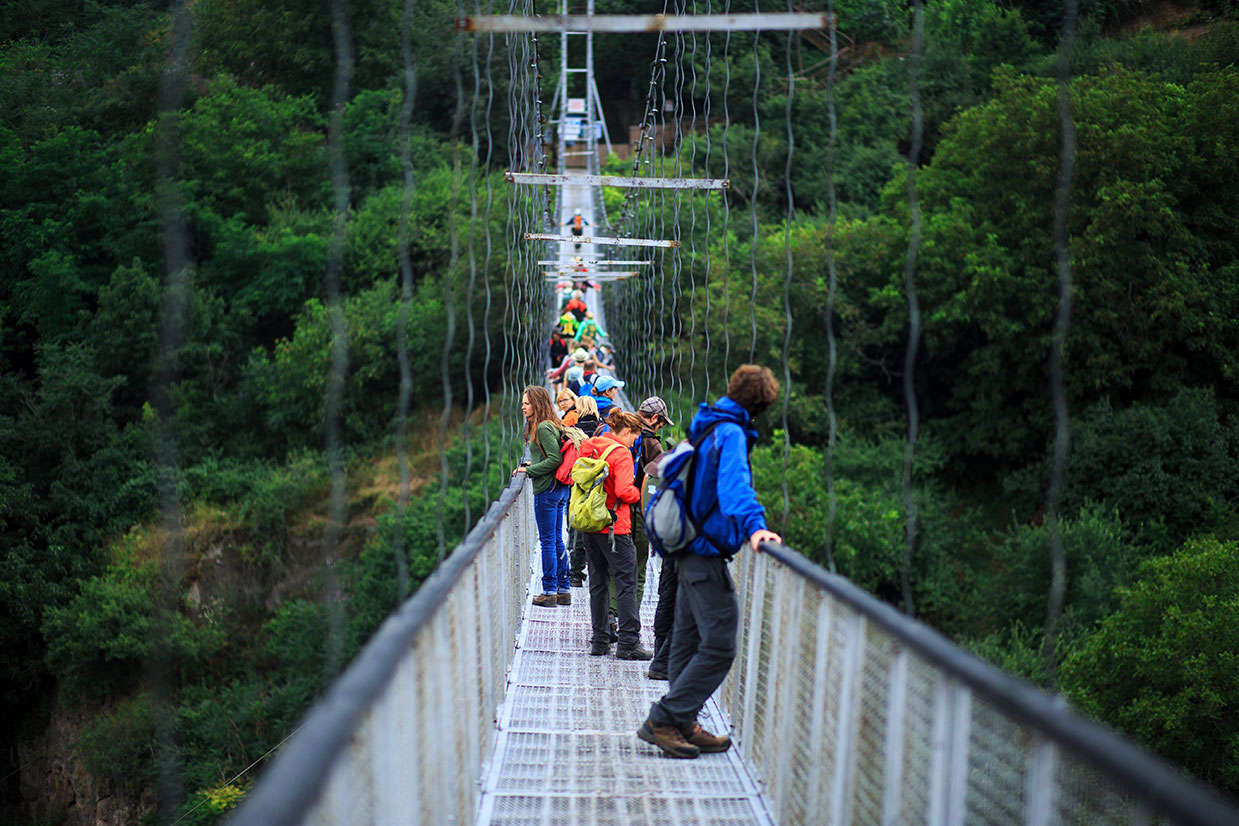 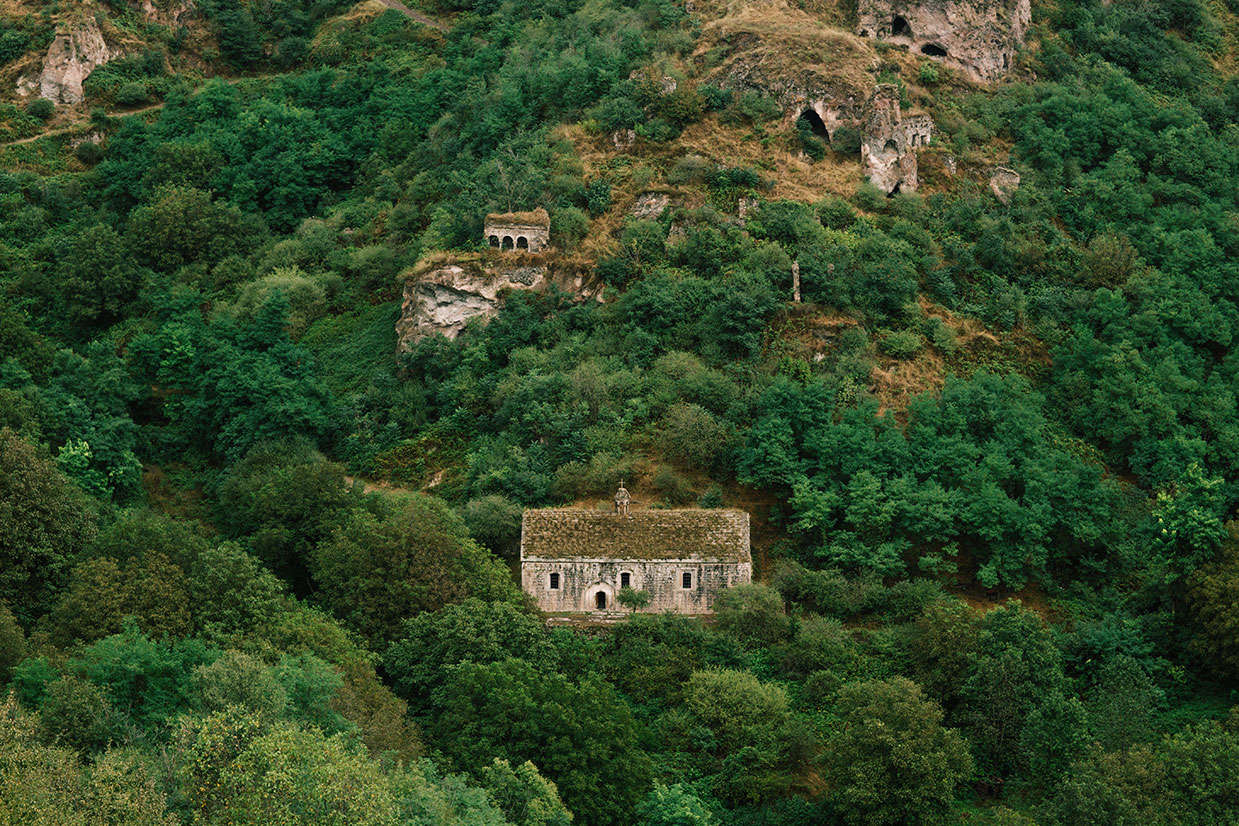 Khndsoresk is a cave village and rural community that was inhabited til the middle of the 20th century. It is located in the mountains of Syunik, in southern Armenia. In the bizarre sandstone pillars, the inhabitants once created accommodations for humans and animals. The closer you look, the more windows and entrances you can see. The smaller ones served as storage spaces, the larger ones as apartments, workplaces, and churches. The caves are mostly empty today, however, the villagers often come to their old village to light candles and to store the products in the caves. Some of the caves are still inhabited by those elderly people who can not or do not want to get used to modern life. The village is located on the right side of Goris-Stepanakert Highway, on the steep slopes of Khor Dzor (deep ravine), from which the name Khndzoresk came. Crossing the bridge at the entrance to the town, you continue in the direction of the towns of Lachin and Stepanakert. New Khndzoresk, which is today's inhabited area, was built in the 1950s. About 90% of the population work in agriculture (animal husbandry and horticulture). There is a small milk processing company. The municipality has a number of administrative and public institutions, such as the municipal council, secondary school, music school, kindergarten, library, museum and a cultural club. The climate in the settlement is warm, relatively humid, and with mild winters. Annual rainfall is 450-700mm.

At the end of the 19th century, the old Khndzoresk was the largest village in Eastern Armenia. The village is famous for its numerous and indescribable defensive battles. Absolutely everyone took part in these struggles, regardless of gender and age.

The caves are connected to secret passages that every inhabitant knows. During the invasions, people moved to safer caves and dug into the steep cliffs. This village had a great contribution during the liberation movement of Davit Bek. In 1735, Abraham of Crete was here and wrote in his work "History" about this village. In the 1980s, another village grew 7 km from Khndzoresk due to changes in size and political unrest. This village, which is considerably smaller than Khndzoresk, is called Nerkin Khndzoresk. Kndzoresk is well known for its gorge with picturesque rock formations and ancient cave settlements. At the bottom of the gorge is the 17th-century St. Hripsime Church.

The tomb of Mkhitar Sparapet (national hero) is also nearby. The two banks of the gorge are connected by a long bridge built in 2012. The length of the bridge is 160 m, the height is 63 m. It connects the two parts of the village– the so-called old and new Khndzoresk. The amazing thing about the bridge is that it was built by the inhabitants of the village with their own hands and no machines were used for its construction and even for the material handling they used horses. The goal may have been to preserve the natural and historical heritage of their hometown. The construction of the bridge was initiated by a local entrepreneur. In his opinion, he wanted the bridge to be a way for the youth to return to their roots. According to the estimates of the locals, the bridge can hold 700 people at the same time.

This village is an ideal place for tourists who want to get acquainted with the country's history and enjoy the beautiful and breathtaking nature of these areas while traveling in Armenia.