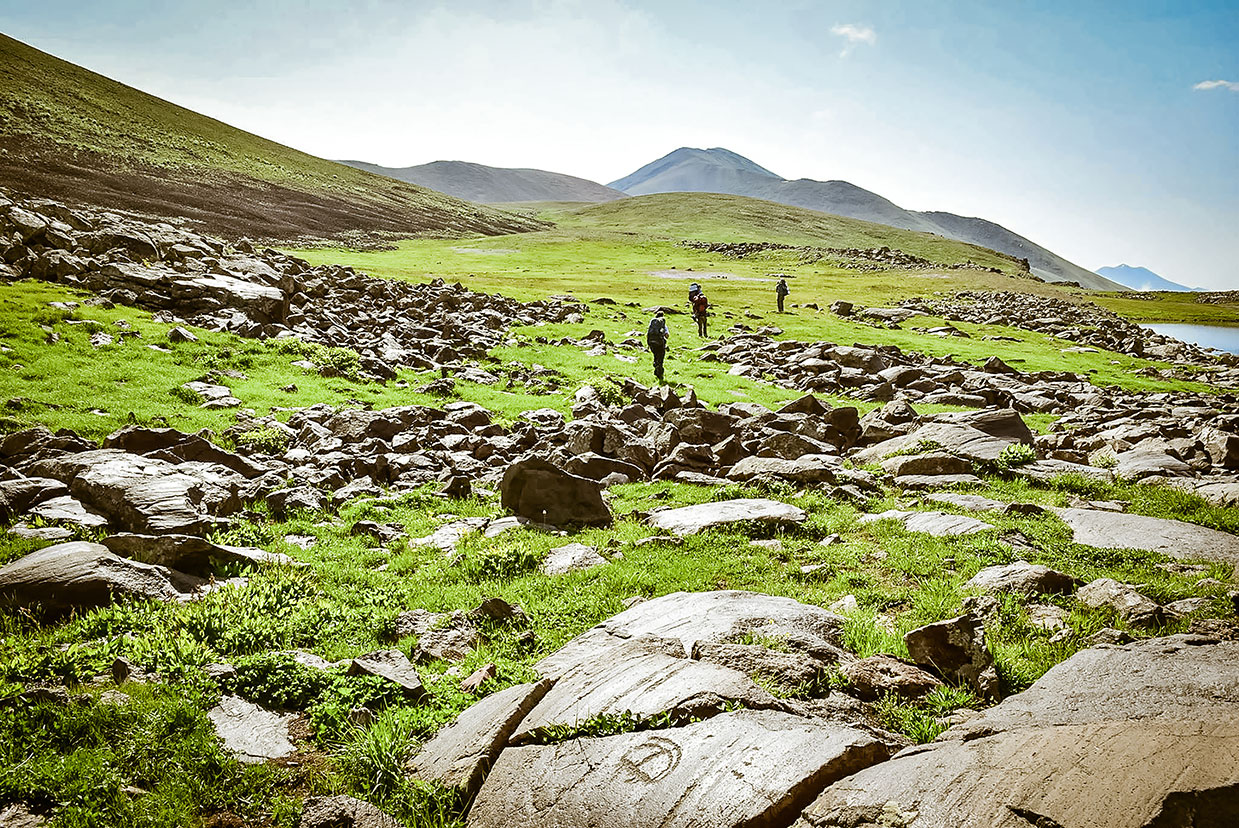 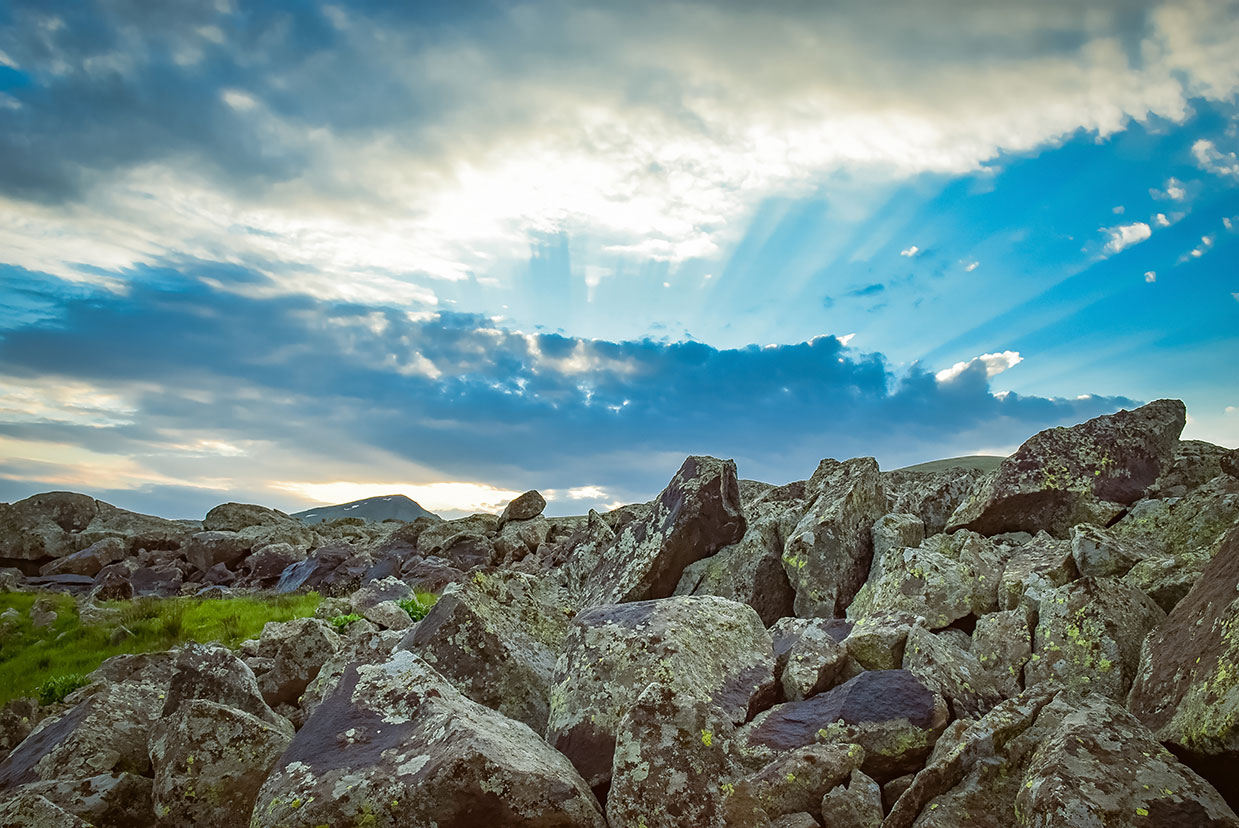 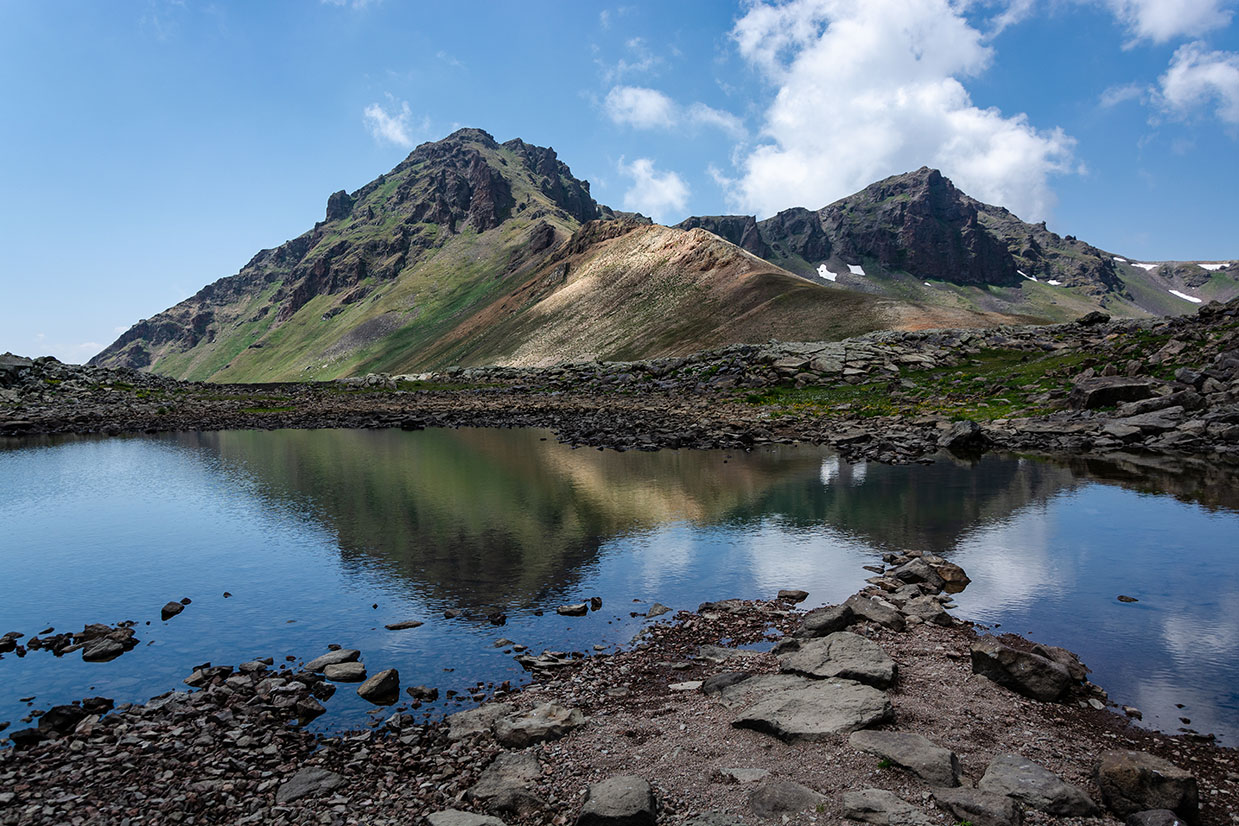 The mountain Ughtasar is located in the province of Syunik at an altitude of 3000-3300 m above sea level. On the mountain saddle, near to the deep-blue Karst Lake, spreads a field full of large flat stones, embellished with countless enigmatic petroglyphs. It is estimated that the petroglyphs discovered in 1968 are between 4000-7000 years old. As goats are a frequently recurring motif in drawings, these pictograms are known as itsagir, i.e. “goat writing’’.

Petroglyphs are an exceptional source for the study of the ancient Armenian civilization. Although they interested certain investigators at the beginning of the 20th century, they were not studied at the time. The interest in art monuments grew during the first decades of the 20th century, when A. Kalantar devoted himself to their investigation. Unfortunately, very little of the rich material collected by him has been preserved. During field studies, the archaeologist S.H. Sardarian unfolded numerous petroglyphs on the foot of Aragats and the Geghama Mountains. Several petroglyphs were also found in Western Armenia.

Exceptionally rich stone carvings were discovered in historical Syunik in 1966. From 1967-1968 the archaeological expedition group of the Archeological Institute of the Academy of Sciences of Armenia began the research and explored a large number of carvings on several thousand rocks in historic Syunik, mainly in the areas of Sisian, Yeghegnadzor and Azizbekov. The collection of these petroglyphs arouses great interest among different specialists, particularly archaeologists. The current collection contains only a small part of the material collected in Syunik and mainly near Mount Ughtasar. The recently discovered rock art monuments occupy the area of several tens of kilometres along the mountains of Tsghouk, on the slopes of Ughtasar, at the foot of the Vardenis Range and the sources of the Rivers Jeghegis, Arpa and Vorotan. The petroglyphs discovered until today are so numerous that it is not possible to highlight even the most important one in a large volume.

More than 2000 decorated rocks were uncovered in Ughtasar in Sisian Region. Here, in the mountain grasslands, where stockbreeders settle in summer, the landscape is rich with Alpine flora. Near this area, in the lowlands and along the rocky mountains, as well as around the small lakes, you can reveal the remains of ruined dwellings, cromlechs, and different tombs. The study of the petroglyphs is only possible during the summer periods. About nine months a year these petroglyphs are covered with snow. The petroglyphs are mostly depicted on "gravestones", and these ornate rock patterns are spread at the foot of the mountains, in valleys including the slopes and territory of Ughtasar, which was named after the camel ("ught" means camel in Armenian, and "sar" means mountain). The massive engravings describe certain activities and have been depicted horizontally or vertically on the flat, brown and black stone fragments. The composition "carvings", which includes 10 to 50 images, includes several hundred figures. The diversity of Armenian fauna is fully represented in the petroglyphs of Ughtasar and Jermajur.

The wildest and domesticated animals of the time can be unveiled, such as goats, moufflons, gazelles, deer, aurochs, horses, wild boars, dogs, wolves, jackals, panthers, bears and lions, aurochs, although they rarely appear here. Meanwhile, there are many scenes depicting hunter with bow and arrow, lance, spears, and shields. Among them, we can see hunting objects, ropes, traps and also bison that move the truck, hooded carts and vehicles looking like sleds, plough, and images that represent the world. Birds generally are not represented significantly. The rock carvings of Syunik are based on scenes connected with urban life and traditions. More frequently we will reveal the images of individual or collective hunting scenes of goats, bison, deer, wild boars, etc. The variety of such scenes in the petroglyphs of Ughtasar and Jermajur create an impression of a survival of ancient times. These petroglyphs of Armenia with so many hunting scenes show the prominence and importance of semi-nomadic livestock and hunting. The Cyclopean fortress and the more than 3 km high structure in Ughtasar seem to serve as temporary dwellings for livestock tribes. The tombs and their carvings are the evidence that they have been in use for many hundreds of years. Scenes of ritual dances, pair dances and group dances may also be explored here.