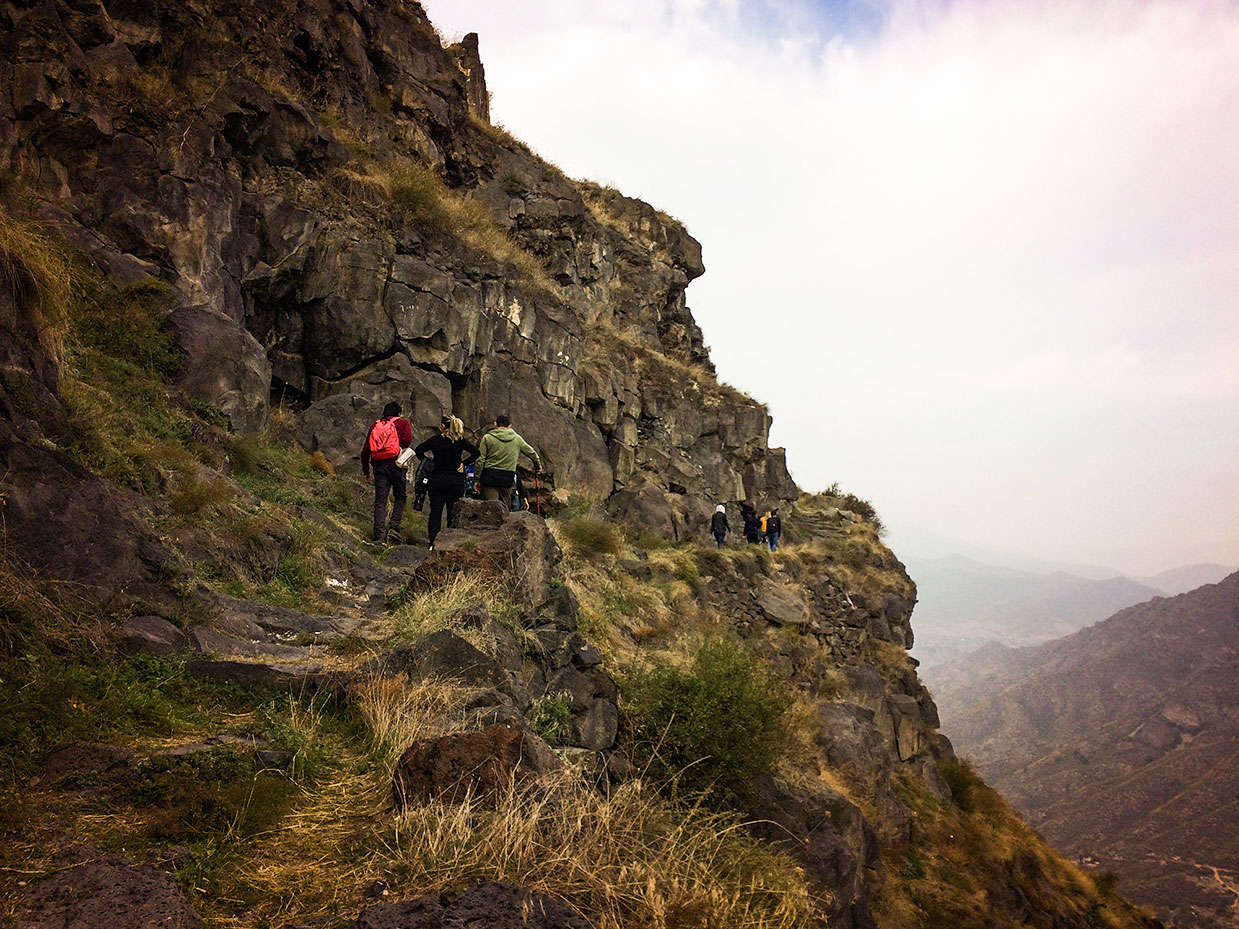 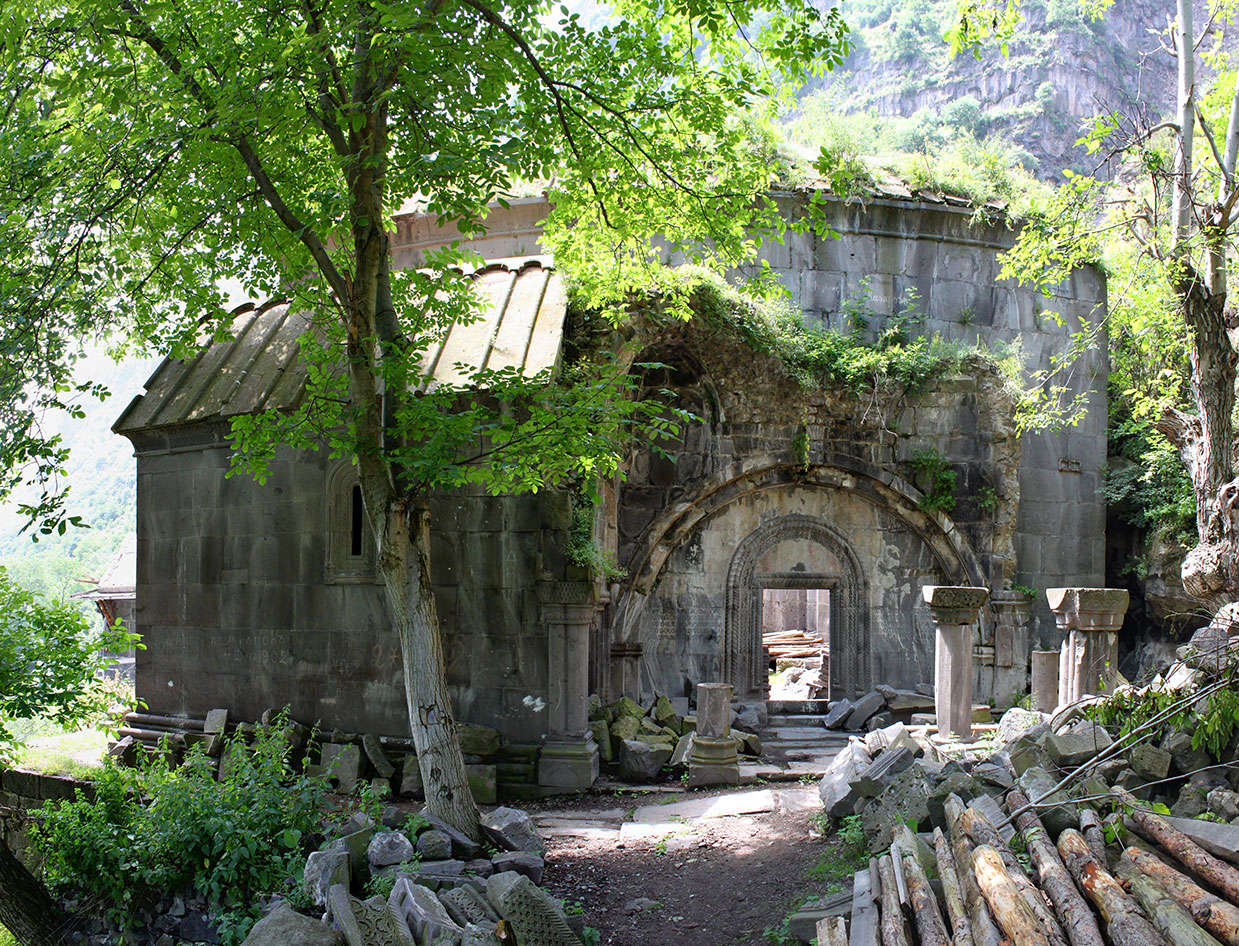 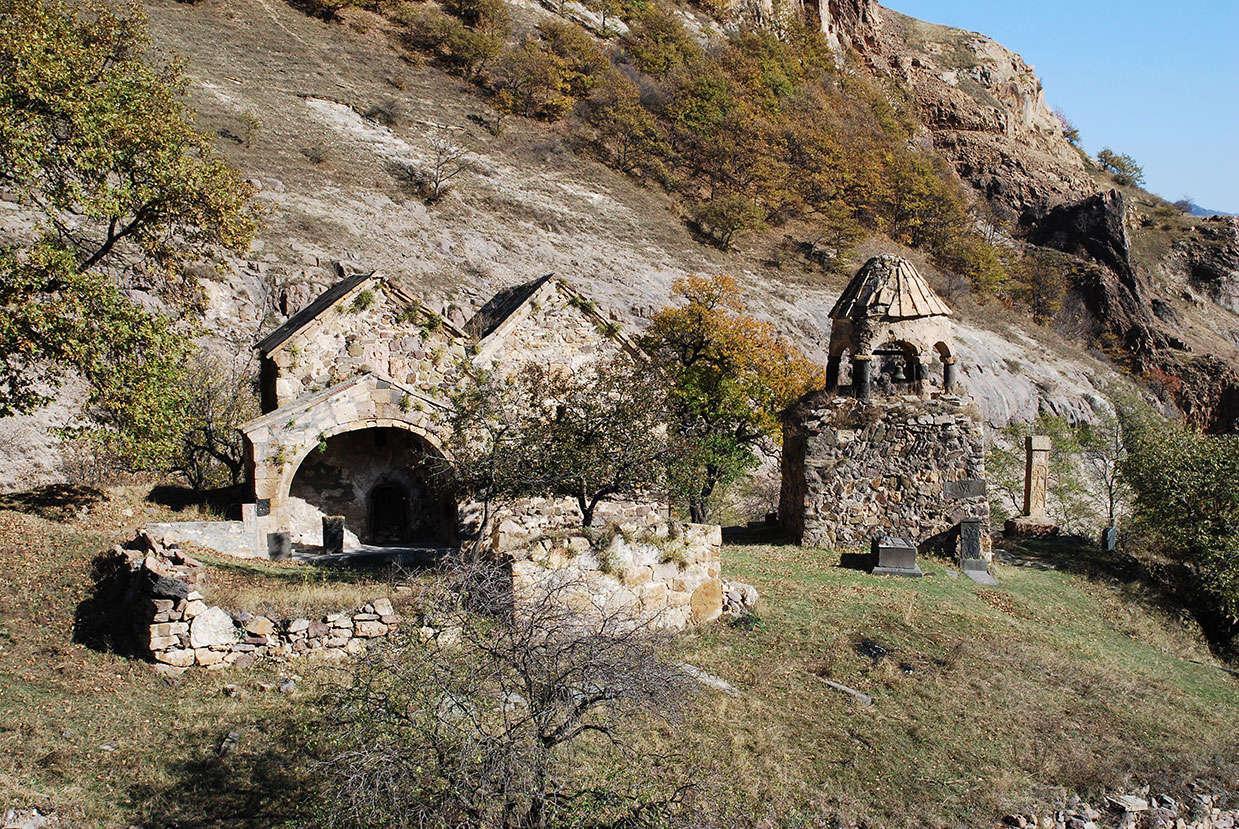 Kobayr Monastery, dating back to the 12th-13th centuries, is an Armenian-Georgian monastic complex, and its name is a compound word: Kob in Georgian and ayr in Armenian both mean "cave". The monastery is located in the province of Lori on the hillside above the village of Kober. It can be reached on foot through a steep, narrow path within 15 minutes. Its construction began in 1171 under the command of the younger members of the Bagratunis branch, whose rule was dominant in Lori.

The monastery later came into the possession of the Zakarian family, which annexed the Georgian Orthodox church. The murals are from this period and were influenced by the Chalcedonian confession. Prince Shah Zakarian is buried here. In 1279 a bell tower was erected in the middle of the complex, in which the tombs of Mkhargrzeli Zakarian and his wife Vaneni were built. The main part of the monuments consists of three churches, bell tower vaults, refectory, chapels, khachkars (cross-stones) and remnants of some walls of the fortress.

The largest church consists of a long, single-aisled hall, which is in a half-ruined state: the apse, the northern and western walls and two lower rows of the southern wall have been preserved. A semi-cylindrical canopy, fixed with arches, covered the church. Two entries from northern and eastern parts were set in a rich casing. The apse was lightened by five windows in two rows. The facades of the building were crowned in high concave cornices, covered with ornamental details, decorations and rosettes and the cross here stood almost as high as the walls. From the outside, the walls were made of clear-cut basalt and plastered from the inside and covered with frescoes. The remains of elaborate and finely crafted frescoes are preserved in the apse and on the northern wall altar (attached in 1971). The paintings of the apse form three rows. In the upper row, the Virgin Mary is depicted with archangels, in the middle the sin of the Eucharist, in the lower part the figures of the saints are represented. There are ornamental belts between the rows. The prophet figures were depicted on the altar walls, and the best-preserved statue was the figure of the prophet Elliyah at the north altar. Later, a square chapel with arched side chapels was erected on the north side of the basilica. The western entrance was decorated with elaborate carvings. An opening connecting the chapel with the altar of the big church had an entrance in the southern wall. The chapel was also plastered and painted from the inside. The frescoes had the same three-row scheme as in the big church. The difference here is that, instead of the Virgin Mary, the sin of Deisus is pictured. To the east of the big church, on the edge of a rock, the half-ruined Mariamashen church is perched with its single-aisled arcades. The western entrance was bounded by semicircular archaic braces, which differed by its simple appearance.

The burial vault of the bell tower had some eminence in the western part of the big church. It appeared to be a square hall, which closed on the eastern side with an apse over the entire length of the wall. The refectory rises northwest of the large church, not far from the burial vault of the bell tower. Only the walls with the lower row of the semi-cylindrical vault were preserved. The harmonious combination of the complex and the surrounding beautiful nature make the monastery a major tourist destination in Armenia.