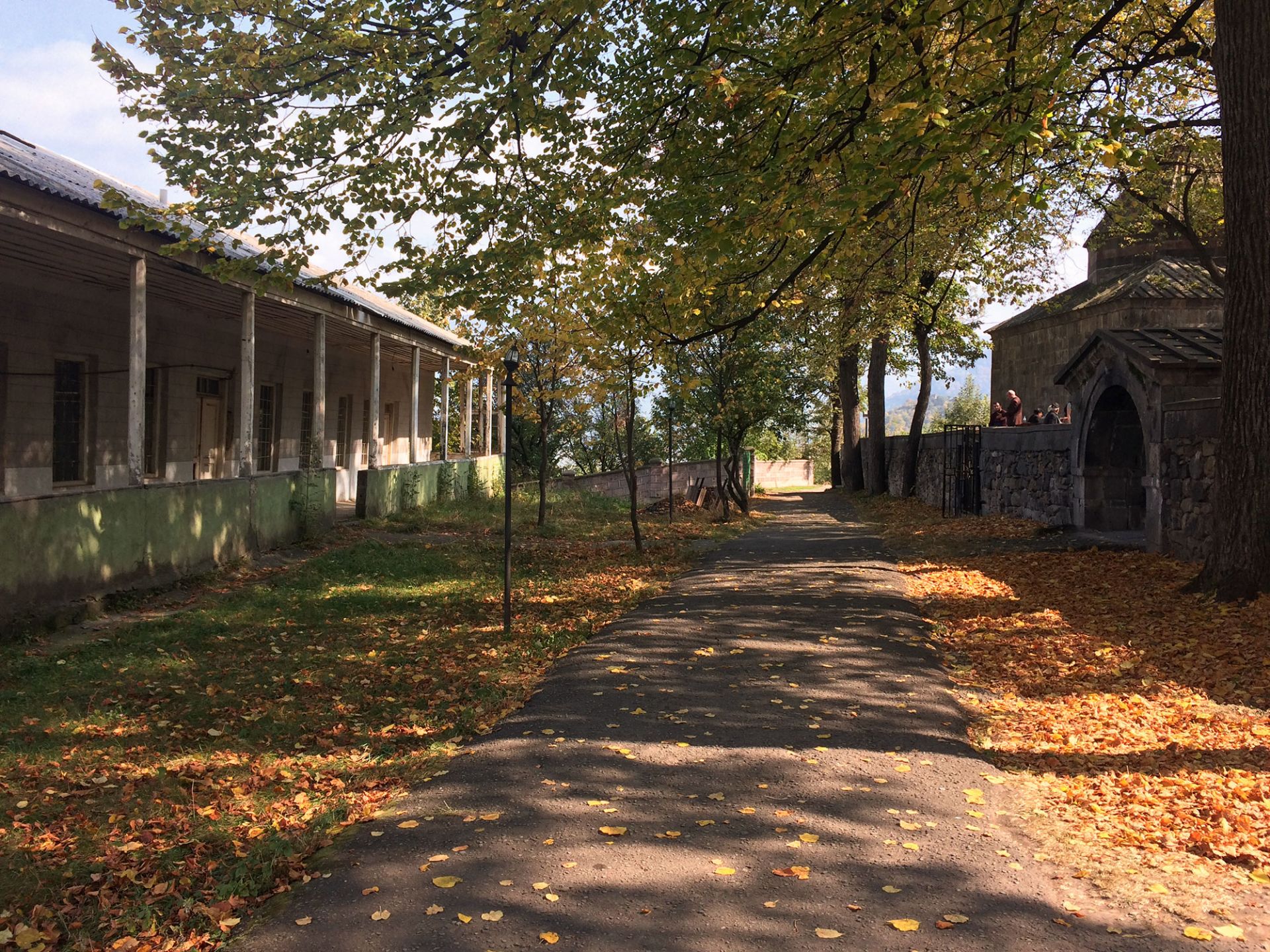 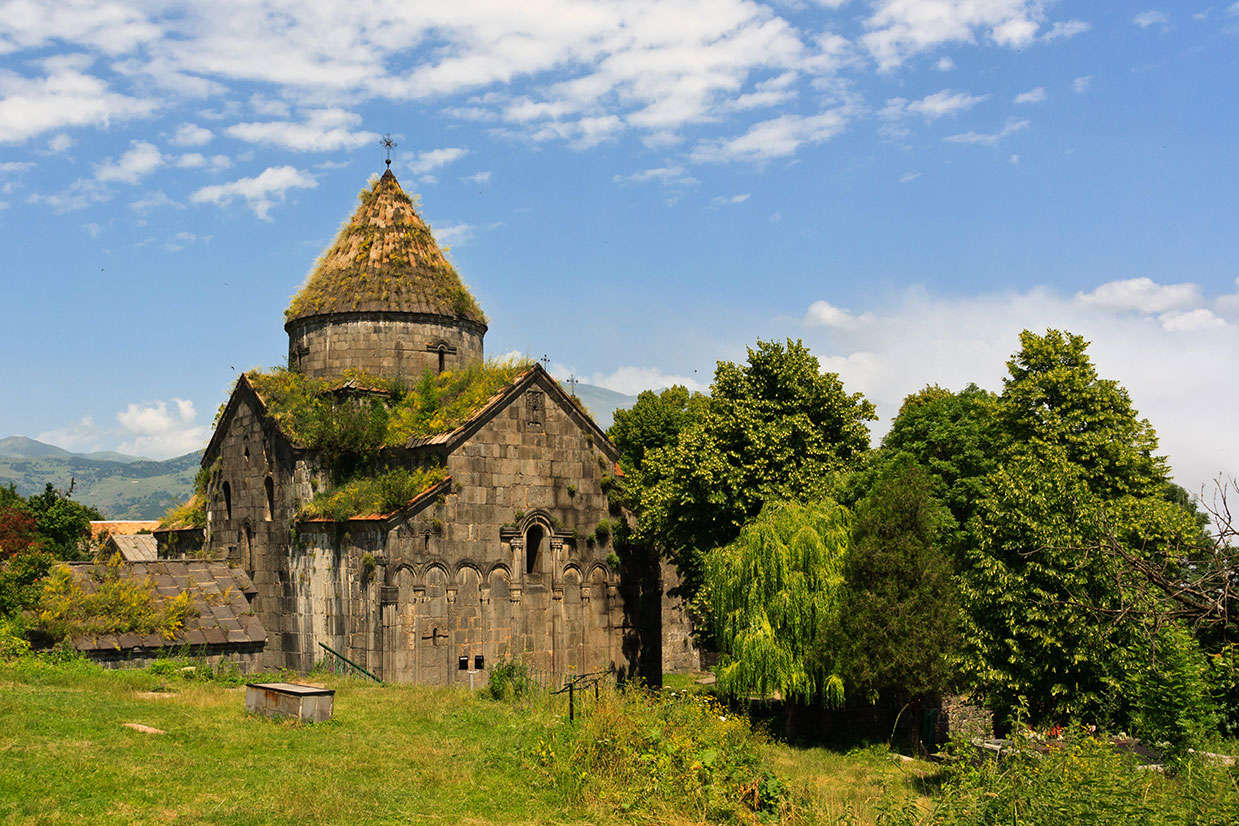 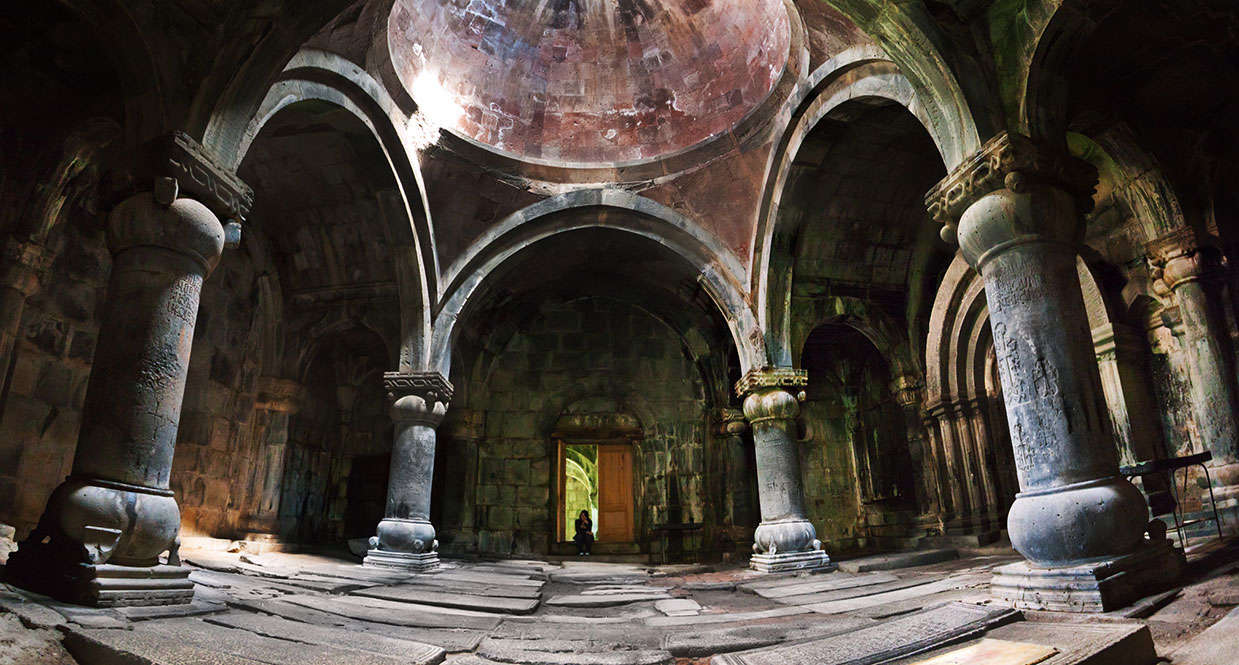 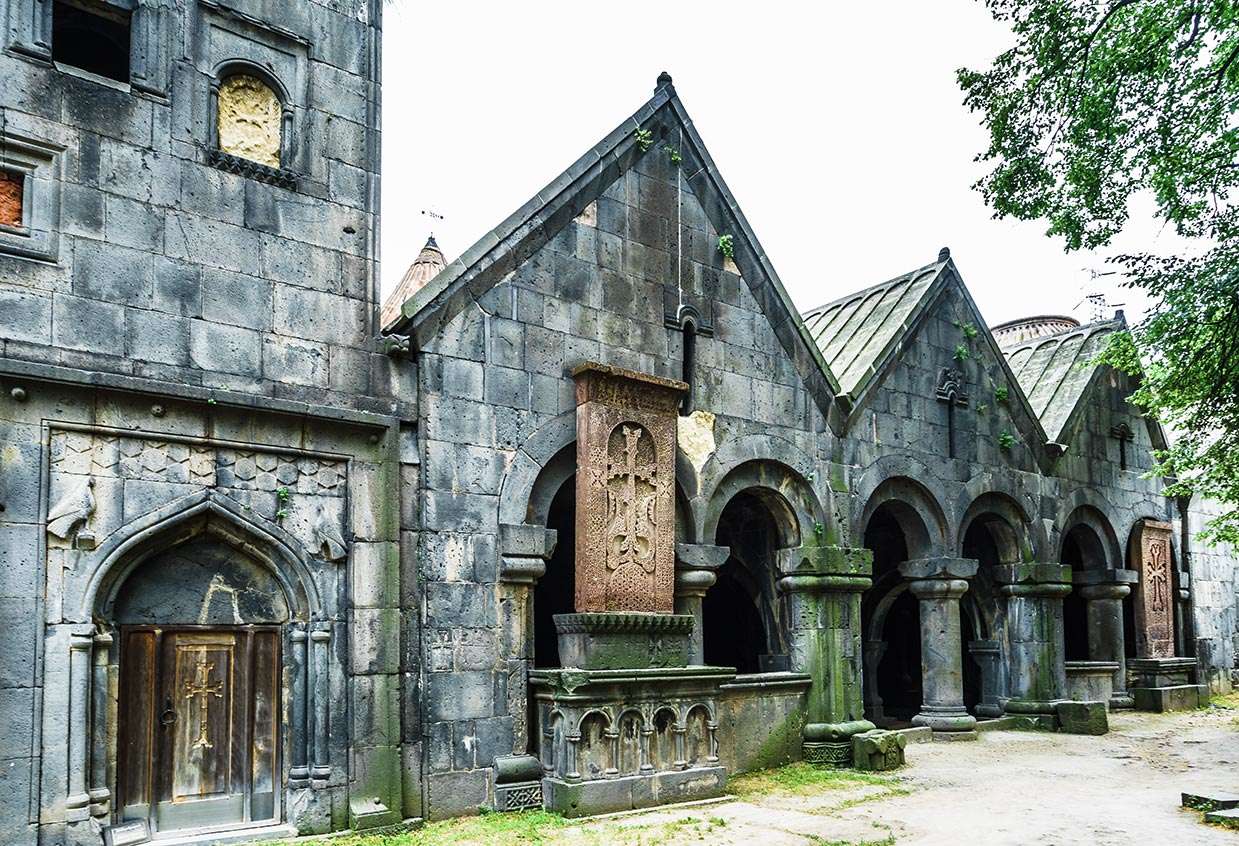 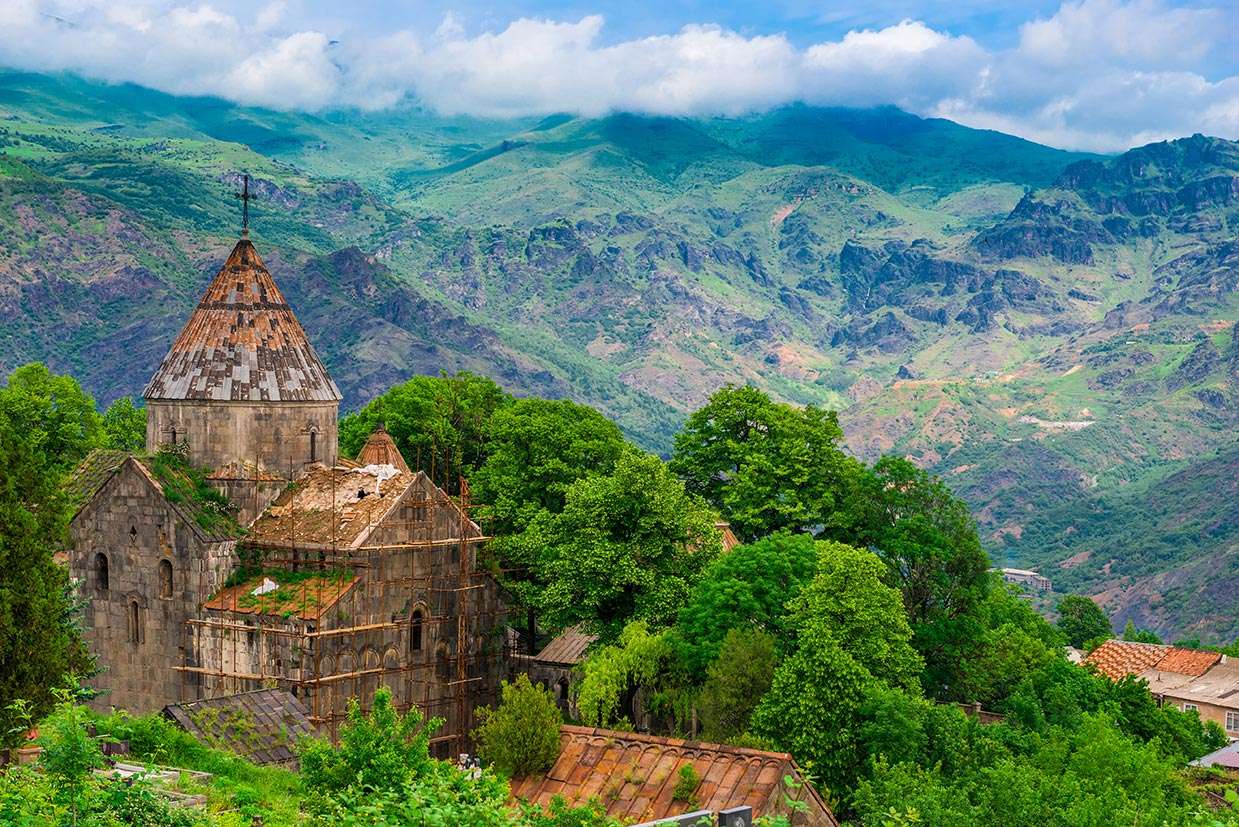 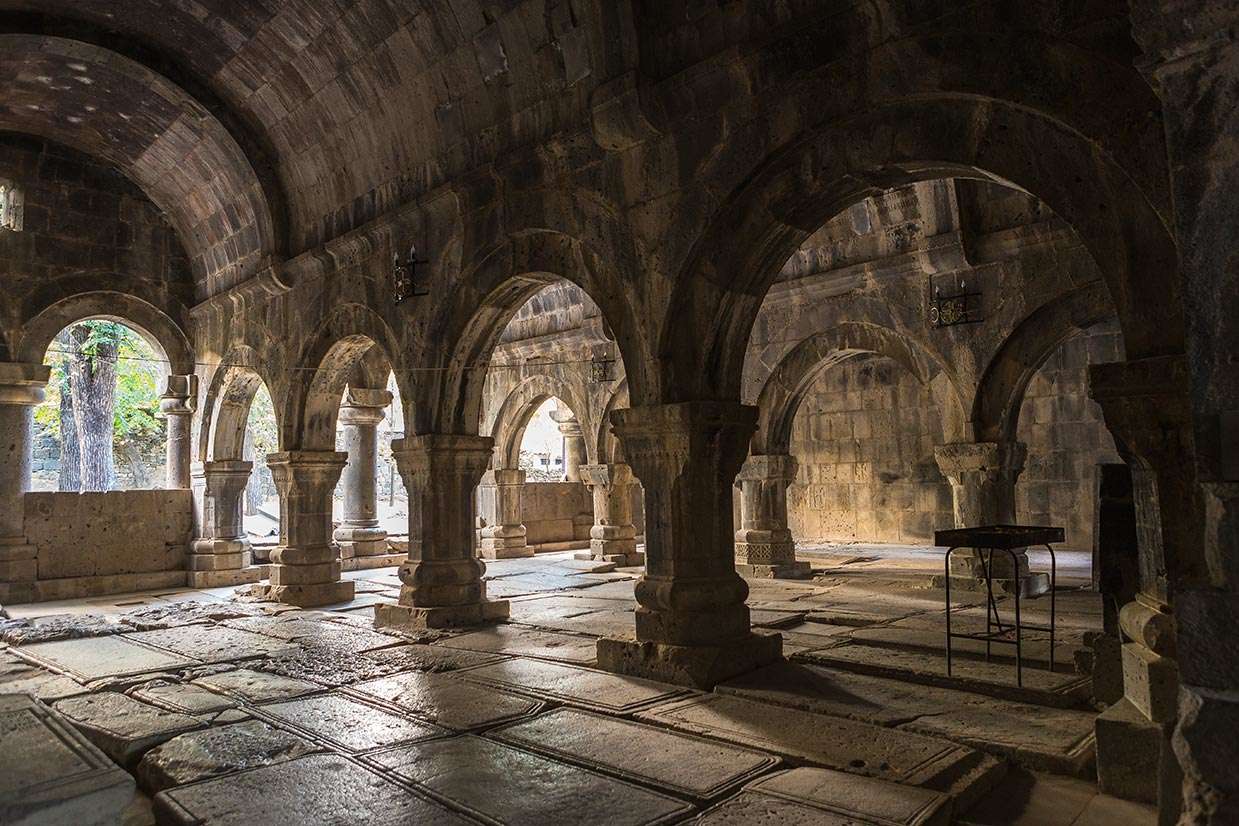 Sanahin Monastery is one of the most impressive monasteries in Armenia, located in the province of Lori, in Alaverdi. The Monastic Complex of Sanahin was added to the list of UNESCO World Heritage Sites in 1999. The monastery is an entire complex consisting of St Astvatsatsin (Holy Mother of God), St Amenaprkich (Redeemer) and St Grigor Churches, narthexes, fore-church, scriptorium, belfry and academy. It also holds the tombs of Princes Kyurikyan, Zakaryan and Arghutyan-Erkaynabazuk (long-armed), St. Hakob Church, a fountain and a refectory. Both Sanahin and Haghpat Monasteries, are close to each other and carry the same spirit of the times, but each has its own role and place as a scientific, educational, cultural, and spiritual center. It is still unclear when exactly the monastery was constructed. According to the legend, the monastery was built in the fourth century when the cross of Saint Nshan (Sign) was craved. As for the name, it is assumed that Sanahin ("սա նրանից հին է") means "this is older than the other one". Based on what the legends tell, Sanahin is older than Haghpat.

The current construction of the monastery is said to have been constructed in the tenth century by King Abas Bagratuni. According to Armenian historians, Kirakos Gandzaketsi and Vardan Areveltsi, the first structure in the complex was founded by some Armenian priests who rejected the Chalcedonian faith and fled to Armenia from Byzantium. It was possible to study human sciences, music, and medicine at the monastery of Sanahin. Different scientific papers were also created here. Later, popular scribes and miniature painters also worked in the monastery. The monastery of Sanahin was later assaulted by Mongols. At first, the Akner Fortress was invaded.

The fortress situated between the monasteries of Sanahin and Haghpat played a defensive role. The Church of St. Astvatsatsin (Holy Mother of God) may be uncovered in the middle of the complex and was built between 928 and 944. The exterior of the church represents a rectangular structure, while the interior is a cruciform building with four annexes in four corners. The dome and the drum were reconstructed in 1652. The Church of St. Amenaprkich (All Savior) Katoghike may be explored near the Church of Holy Mother of God. It was founded by Queen Khosrovanush, the wife of King Ashot III the Merciful. The church also has a domed cross-shaped construction and dominates over other buildings in the complex due to its location. At the top of the eastern facade, there is a bas-relief depicting the kings Gurgen and Smbat. The narthexes (Gavits) of the Blessed Virgin and St. All-Redeemer churches are situated in the eastern part of both churches. They are the largest buildings in the complex, formerly used for secular and cultic purposes. The gavits were able to receive a large number of people during church services, gatherings, and masses. Besides, the gavits were used as cemeteries, for this reason, various gravestones can be unveiled on the ground. Several cross-stones (khachkars) may be revealed around the monastery of Sanahin, but there are two khachkars, which are true masterpieces of khachkar art: the khachkar tombstone of Grigor Tatevordi (1184) and the khachkar of Sargis (1215). Another notable khachkar dedicated to King Abas Bagratuni can also be found here. The khachkar was carved in 1192 by order of Queen Vaneni, the wife of Abas Bagratuni. The queen had this bridge built in 1192 in memory of her husband, King Abas of Lori. A single-arched stone bridge, which crosses the River Debed, can be explored in the town of Alaverdi. It has been bridging the river for eight centuries and used to be the only connection to the village of Sanahin for a long time. The approximately 19 m long bridge has been restored several times, but the technical masterpiece of the 12th Century was by no means diminished. There is also a figure of a lion, carved in one of the corners of the bridge. This is the overall image of an extraordinary Sanahin Monastery, and a visit will definitely enhance your knowledge and perceptions of high-quality architecture.