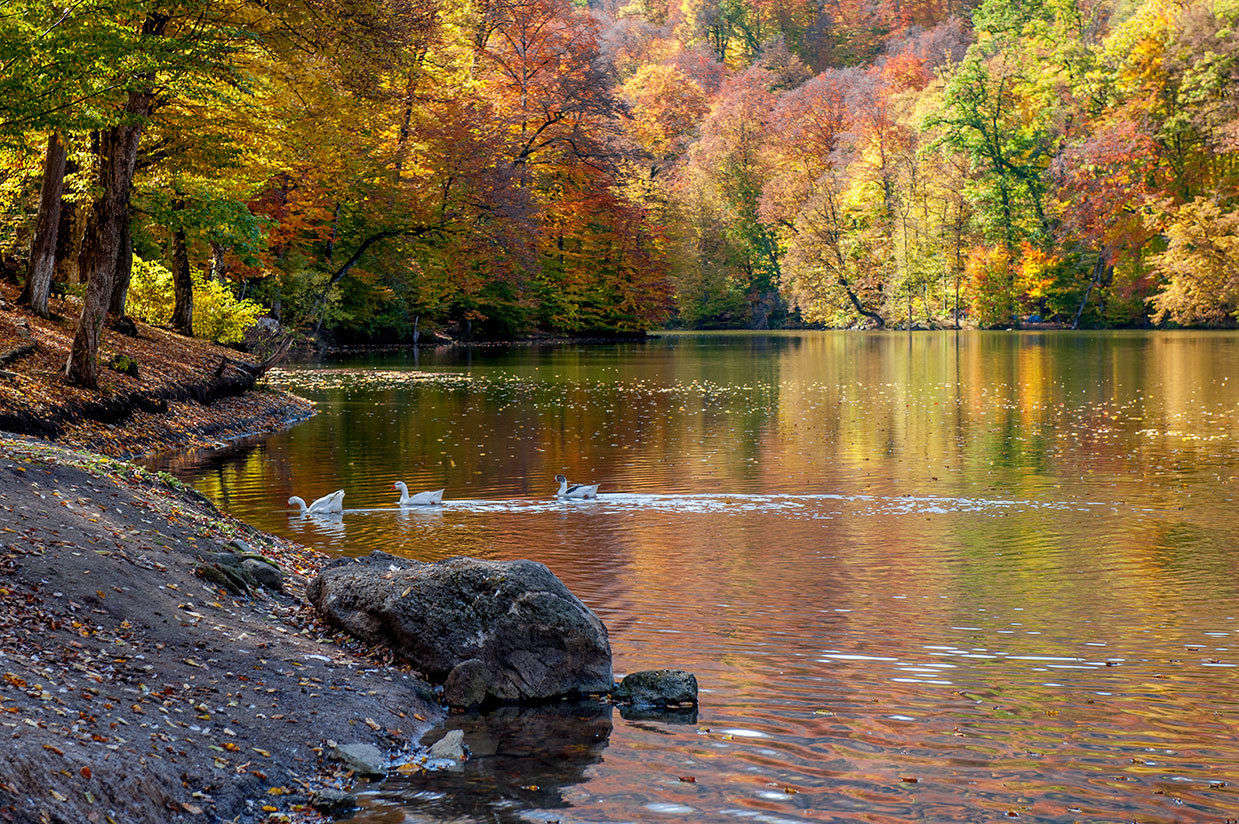 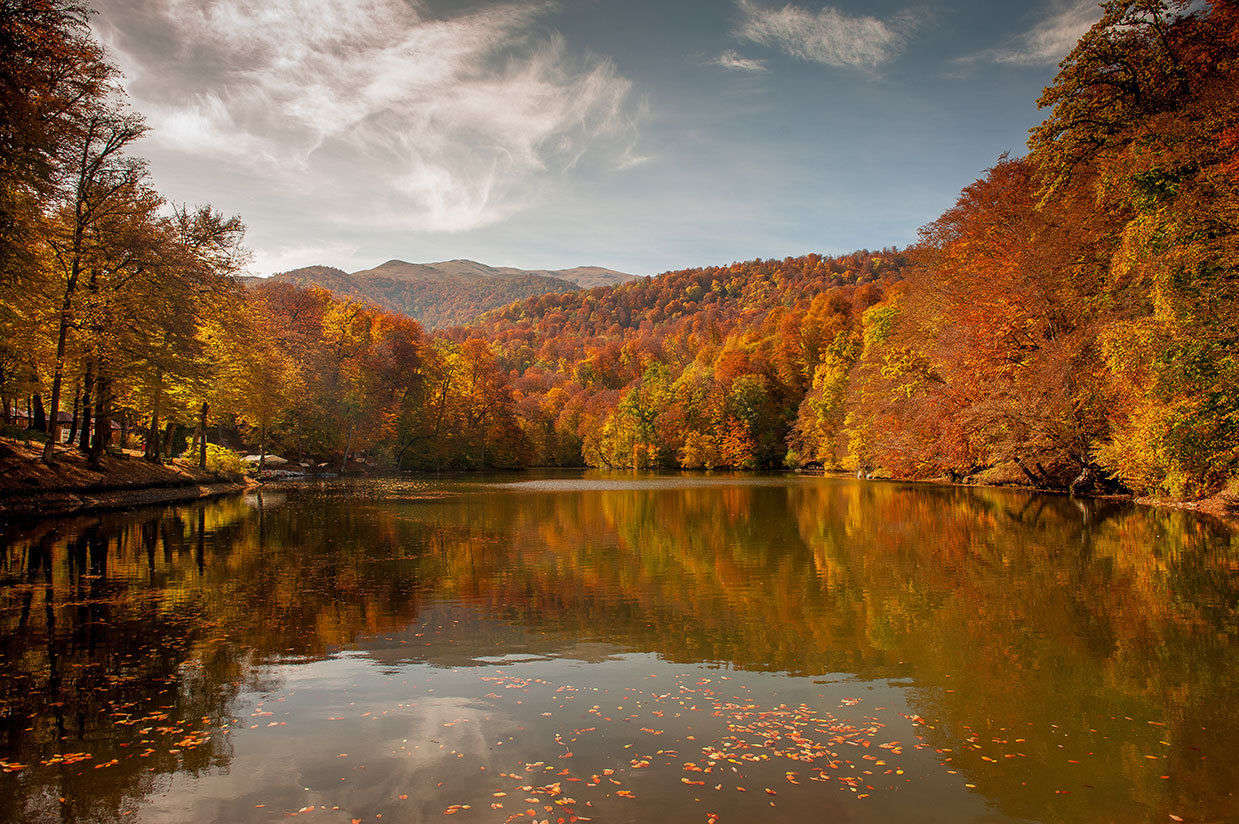 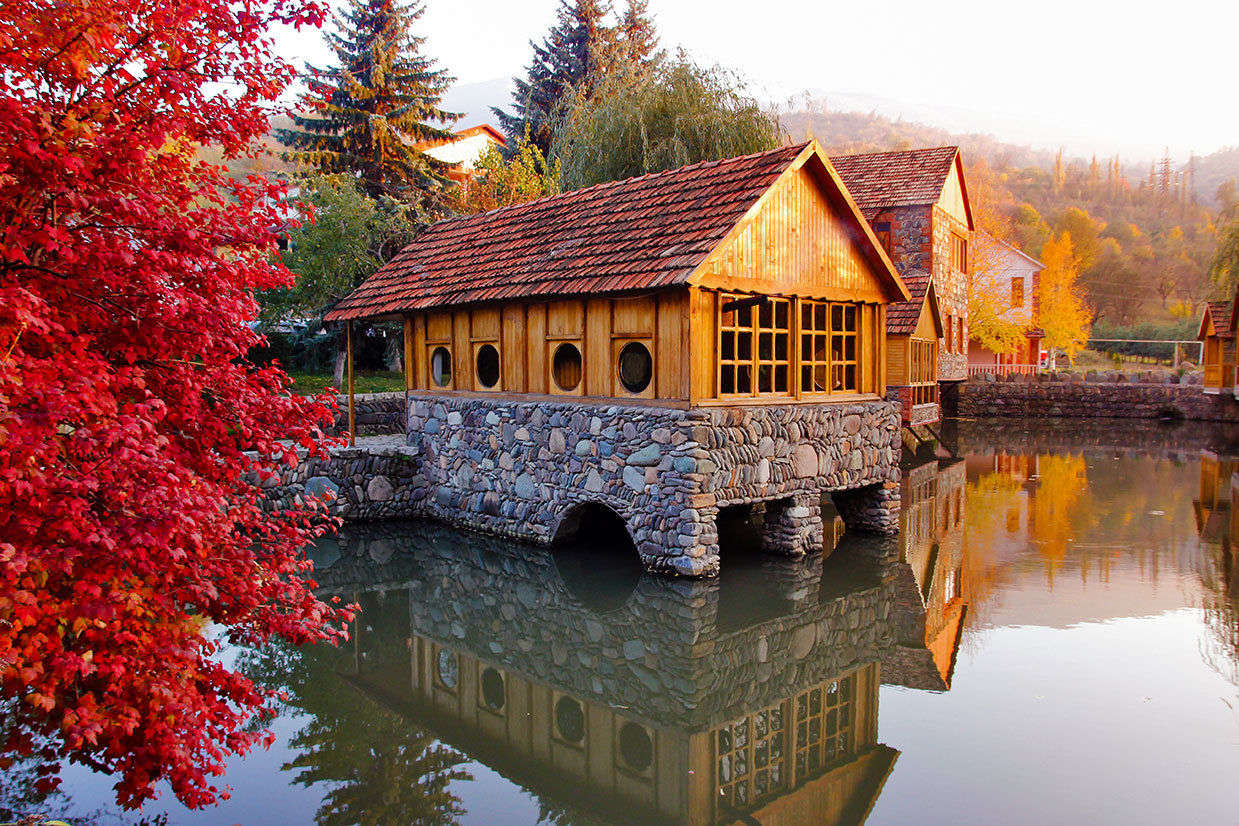 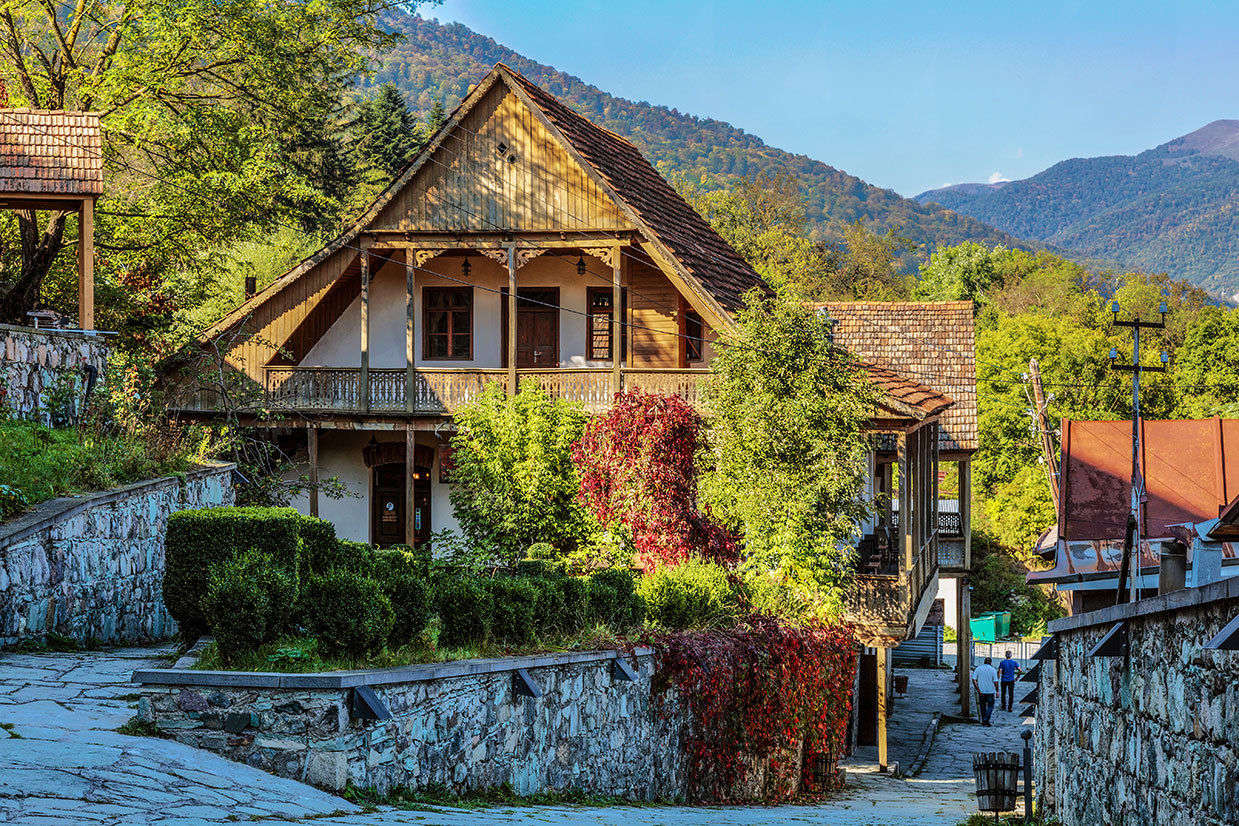 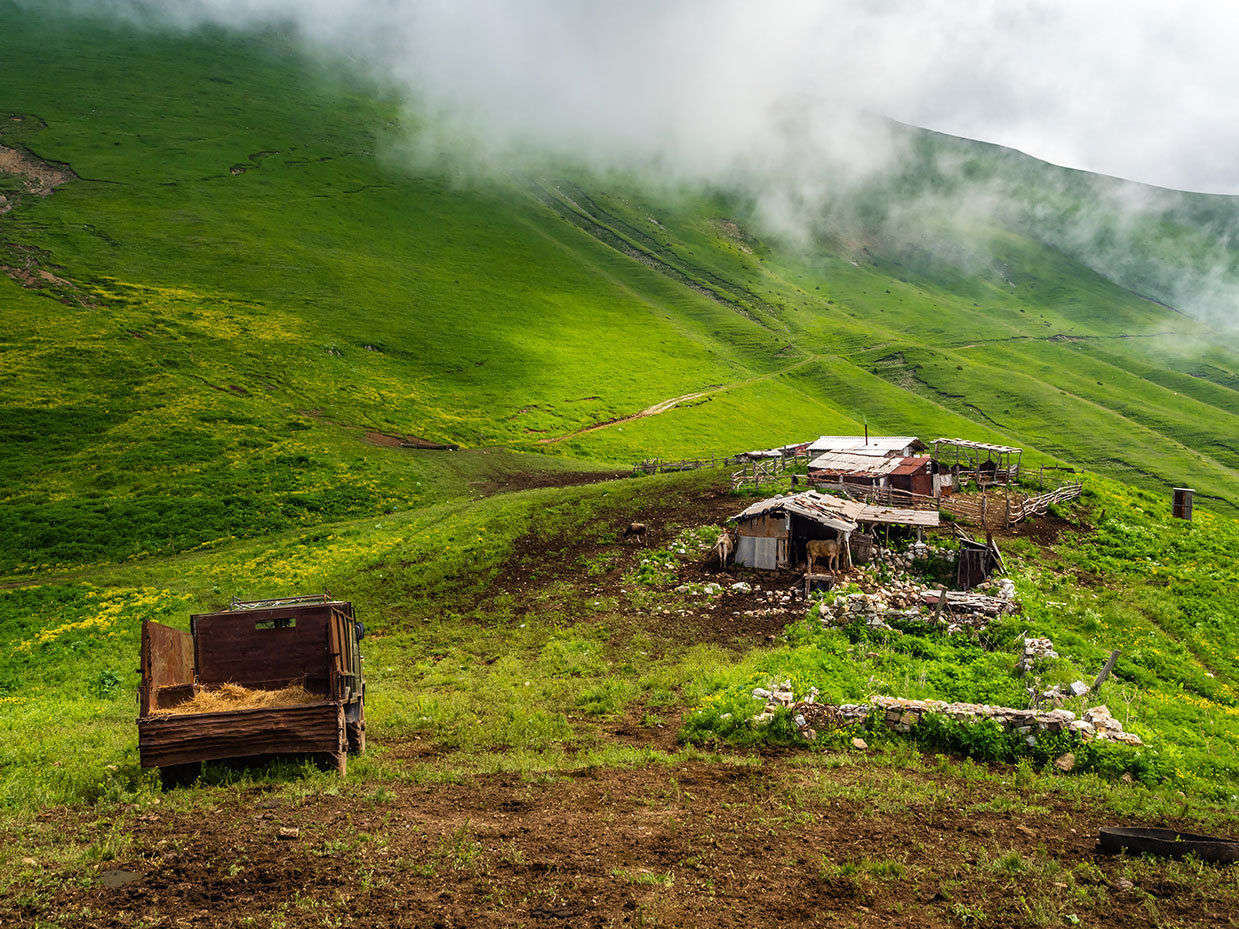 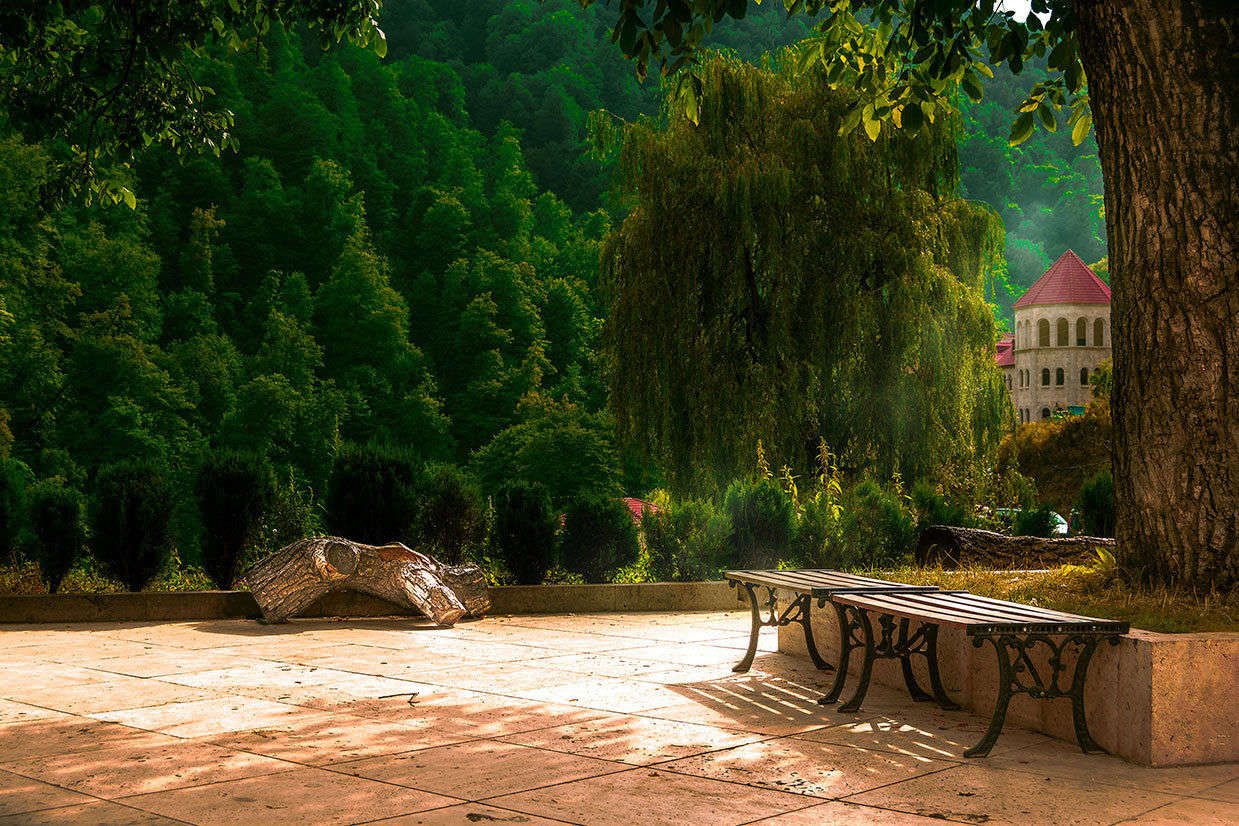 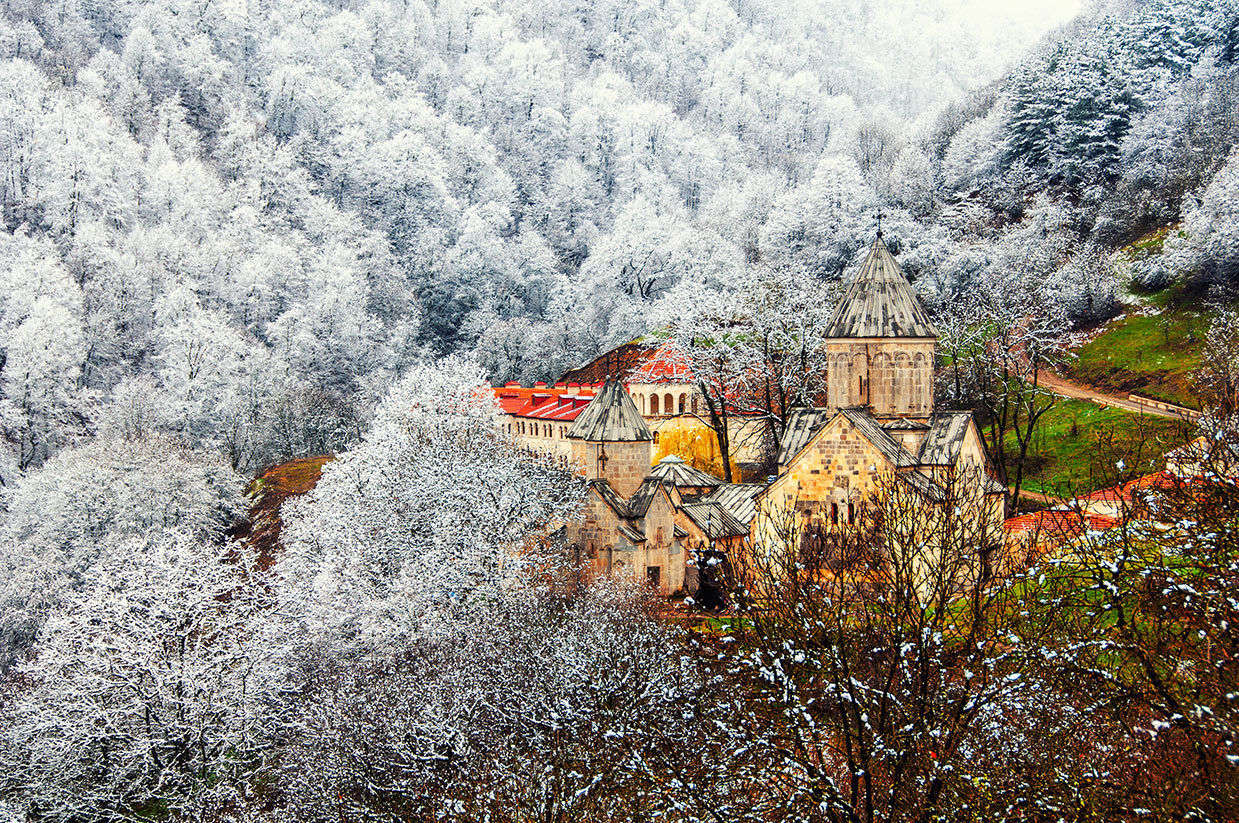 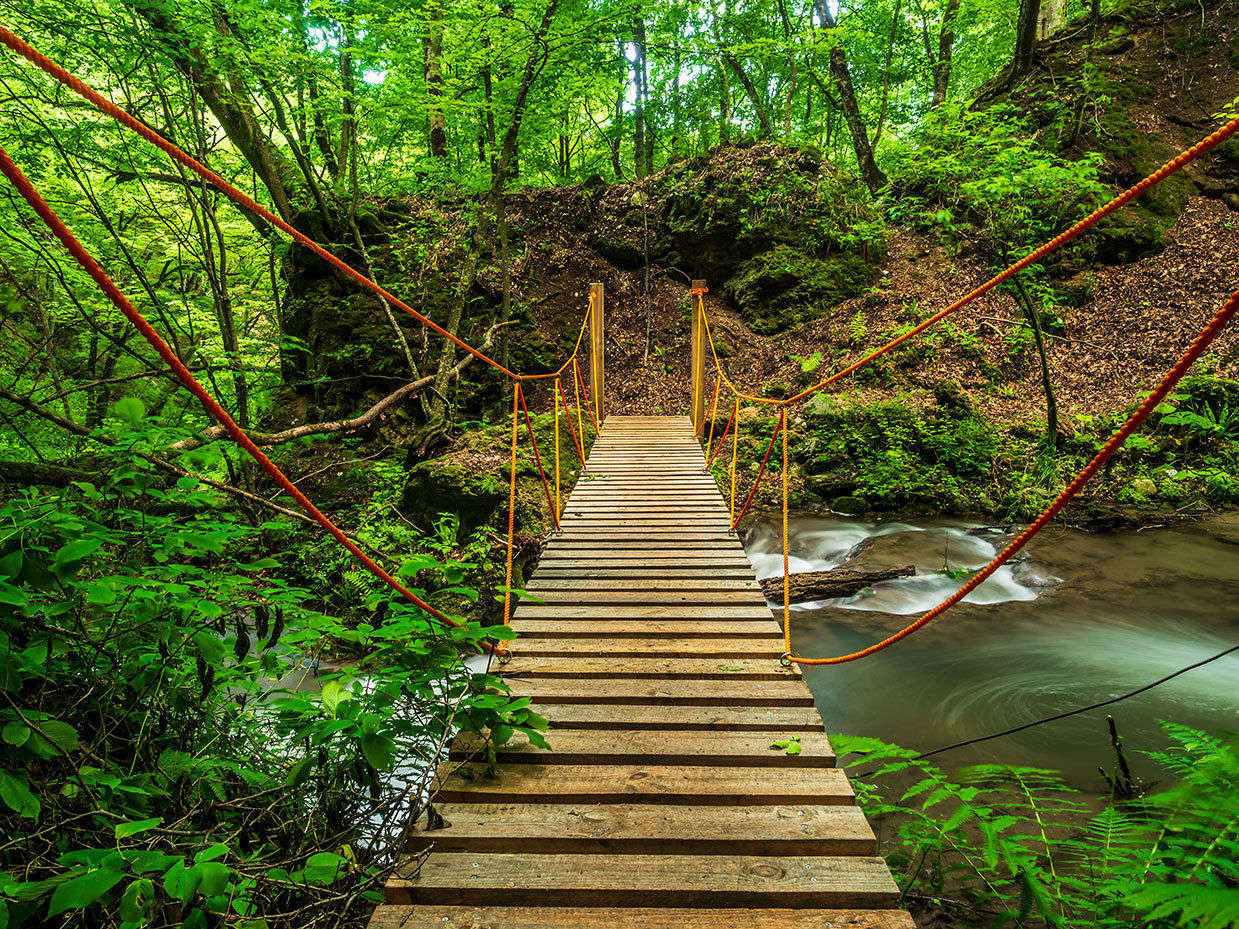 Dilijan, "the Armenian Switzerland", is known for its fresh air, breathtaking landscapes, mineral water, even for traditional houses, chalets with their carved wooden gables and their large glass porches. A cosy atmosphere in nature. The town is located in the province of Tavush, in the beautiful Aghstev valley. If you leave Lake Sevan to the north and cross the Sevan Pass (2114 m above sea level) or, even more impressively, drive through the tunnel on the interregional motorway, you will suddenly find yourself between richly-wooded mountain slopes. The dramatic changes between the regions of Tavush and Gegharkunik are obvious. First, the barren, dusty landscape and then the lush green forest. One of the most splendid and colourful spots in Dilijan is the Old town along Shamberyan Sreet. The Old town was restored by Tufenkian Foundation. Here you will find the hotel museum "Old Dilijan", a wooden furniture with a very original style and handmade rugs. According to an ancient folk legend, the name of the town was named after a shepherd named Dili. The shepherd Dili was in love with his master's daughter, but her father was against it and ordered to kill the shepherd. For several days, the sad mother mourned, searching for her only son in the area and crying desperately, "Dili jan, Dili jan ..." ("Jan means "beloved one" or "dear" in Armenian when added to a given name). For this reason, the town was called by this name Dilijan.

Historically, the area of today's Dilijan - known as Hovk - was part of the Varazhnunik district of Ayrarat; the 15th province of historic Great Armenia.

Excavations conducted in the 1870s found many valuable items dating back to the late Bronze Age and early Iron Age (between the end of 2000 BC and the beginning of 1000). Some of the excavated collections were taken to the museums of Moscow, Saint Petersburg, Tbilisi, Baku, Yerevan, and of course a part was also kept in the Dilijan geological museum. During the Middle Ages, the area of Dilijan was known as Hovk. Hovk was a popular forest and summer resort for the Arsacid kings to show off their hunting skills. The Bujur Dili settlement was founded in the 13th century near today's Dilijan. Haghartsin and Goshavank monasteries were built between the 10th and 13th centuries. The monasteries have developed rapidly and served as cultural and educational centres. Haghartsin is one of the iconic examples of evolving Armenian architecture in the Middle Ages. Many other important religious and educational centres of the Middle Ages have survived in Dilijan, such as the Jukhtakvank Monastery and the Matosavank Monastery.

Following the independence of Armenia in 1991, Dilijan became part of the newly established Tavush province, following administrative reforms in 1995. Today Dilijan is not only one of the most famous mountain resorts in Armenia, but also an international education centre for locals and foreigners, through the establishment of many developed schools and educational institutions. Dilijan is located on the banks of the Aghstev River, over 20 kilometres long and 1,500 meters above sea level. The valley is surrounded by the Little Caucasus from the north and by the Semyonovka mountain pass from the south. The mountainous areas - mainly the mountain ranges of Bazum and Pambak - are covered with dense forests covering an area of more than 34,000 hectares. On the highest peaks of the mountains, the forests rise to alpine meadows. In addition to the Aghstev, many other tributaries flow through the city. Dilijan has a rich historical and cultural heritage. The nearby excavations in the prehistoric cemeteries of Golovino and Papanino found nearly three thousand years old bronze objects, including armour, daggers, jars, earrings and others. All these items can be found either in the Dilijan Museum or in the Hermitage. In the province, industry, tourism, education, sports are well developed. Armenian Switzerland attracts many tourists from all over the world.