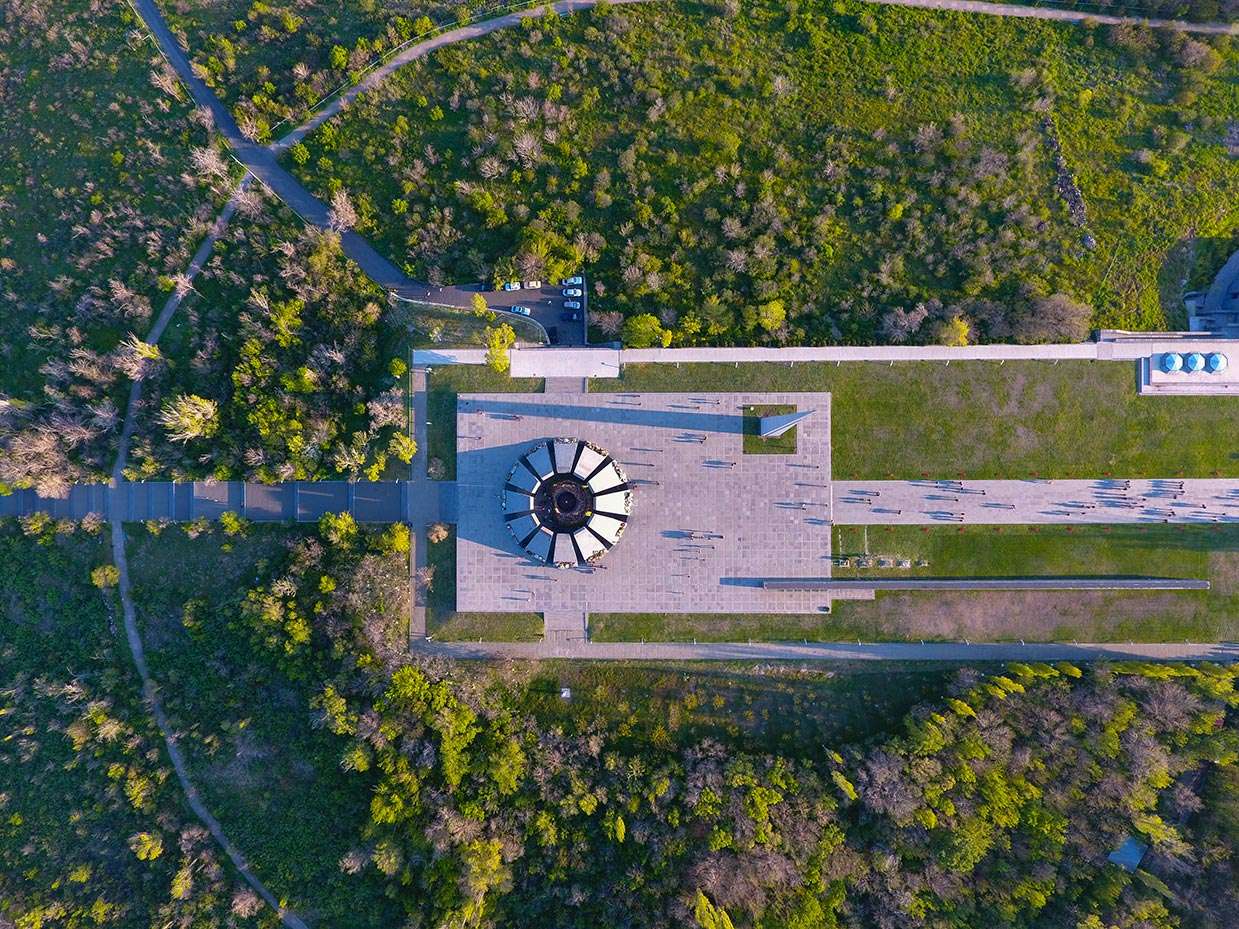 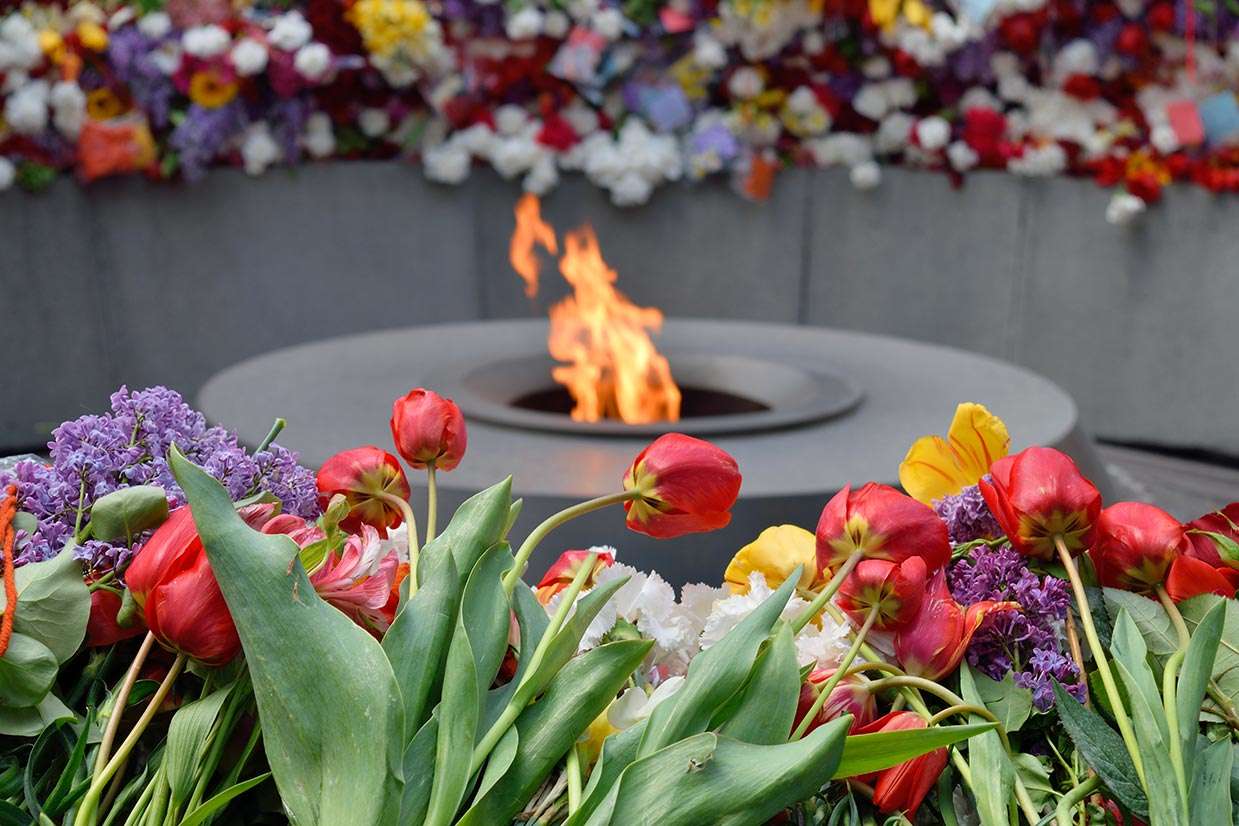 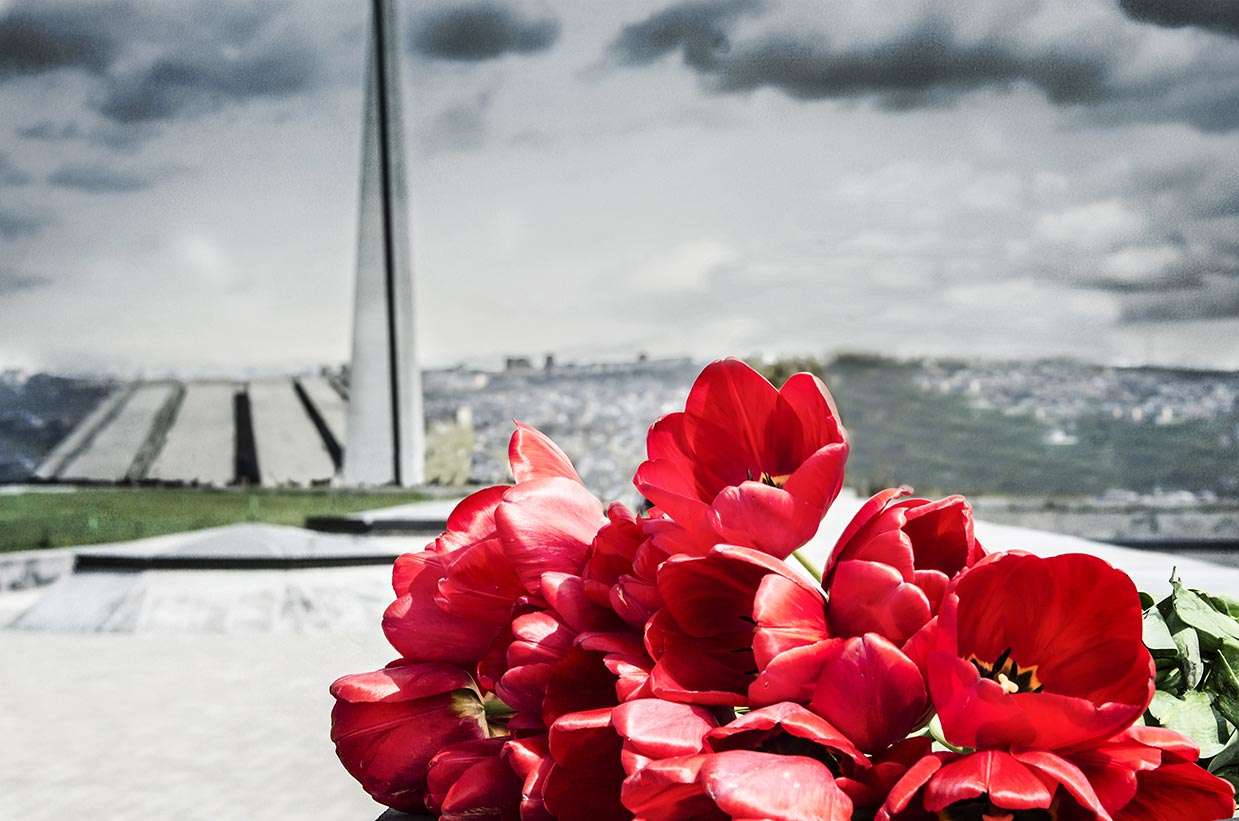 The beginning of the 20th century was a difficult period for Armenians. Western Armenia was under the rule of the Ottoman Empire. In 1915, many Armenians were killed and massacred by the Turks. High on the hill rises Tsitsernakaberd, translated as Swallow Fortress, opposite mountain Ararat, which has a towering view of the capital. On this hill, the monument complex was built to commemorate the victims of the Armenian Genocide of 1915. According to a legend, the temple of Astghik, which was the Armenian goddess of love, was located on a hill. Swallows lived on the second floor of the temple. These swallows served as messengers for the goddess when she wanted to speak to her lover, the god Vahagn, who was the god of thunder. Vahagn was known among Armenians as "Vishapaqagh" which means dragon slayer in Armenian.

The monument, opened in 1967, was designed by architects Tarkhanyan and Kalashyan. In a huge square covered with basalt slabs, there are twelve slightly inclined, massive pylons in a circle, the tops of which are sawn-off. Inside the circle flames there is an eternal flame. This is the symbolic tomb of more than 1.5 million Armenian women, children, and men who were expelled and murdered from the eastern part of the Ottoman Empire between April 1915 and winter 1915-16. Nearby is a 44-meter-high obelisk that symbolizes the spiritual rebirth and survival of the Armenian people and a long wall, on which the names of the affected Western Armenian villages and towns are engraved with "iron letters".

Before reaching the central part of the monument, one first observes a 100-meter long basalt memorial wall with the names of the cities carved in stone. The names also include the Armenian population massacred by the Turks during the genocide. The last part of the memorial wall houses glass roofs since 1996 with tombs of political and spiritual figures, who were protesting against the Armenian genocide. Among them are Armin Wegner, Franz Werfel, Johannes Lepsius and many others. The Armenian Genocide Museum was opened in 1995. It was designed and planned by the architects S. Kalashyan, L. Mkrtchyan and the sculptor F. Arakelyan. The museum, which is a two-storey building, is located directly on the side of the hill. It was built there, so as not to interfere with the imposing presence of the monument. The roof of the museum is flat and covered with concrete slabs. It overlooks the picturesque Ararat Valley and the majestic Mount Ararat. On the first floor, there are various offices and rooms for research. Komitas Hall with 170 seats, a reading room, and a library are also located on the first floor. The museum's exhibition hall is on the second floor. It covers an area of over 1000 square meters. There are three exhibition halls in the building. An outdoor gallery with its own hall is also located on the second floor.

Every year on the 24th of April, on the commemoration day of the genocide, hundreds of thousands of people from all over the world make a pilgrimage to Tsitsernakaberd and put flowers at the memorial. Over the years, a large number of politicians, artists, musicians, athletes, and religious persons have visited the memorial. On the other days, not so many people can be seen in Tsitsernakaberd. It is always very calm and quiet there. Even when there are many people, it never gets too noisy. Tsitsernakaberd is a popular tourist destination with its rich forests that everyone should visit at least once.