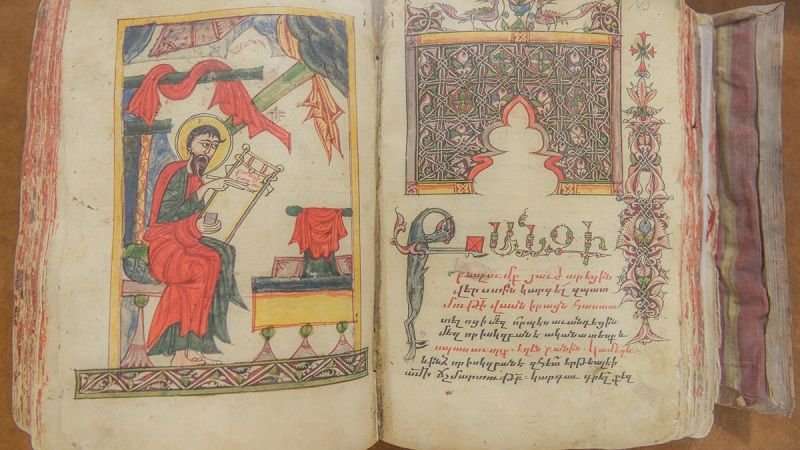 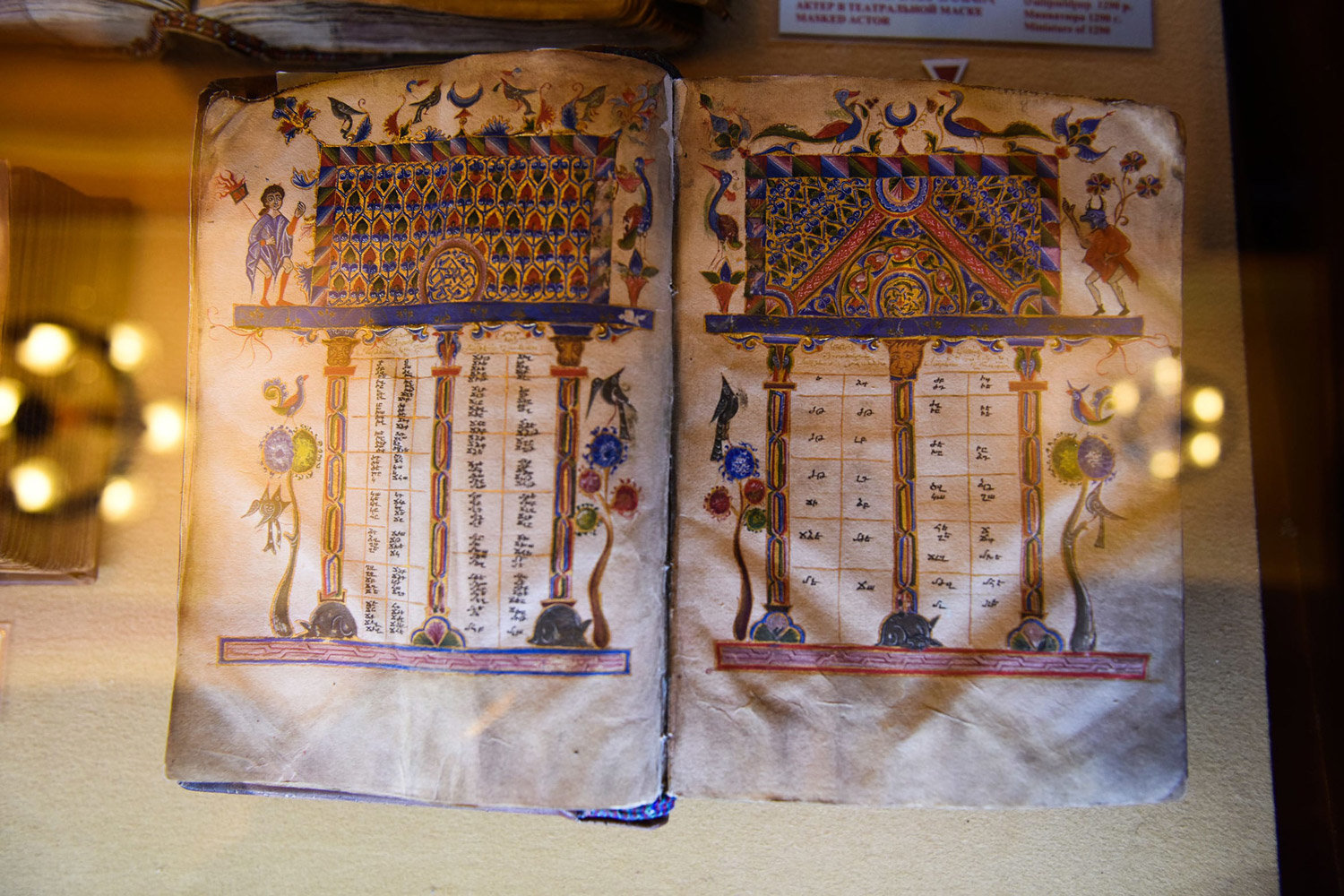 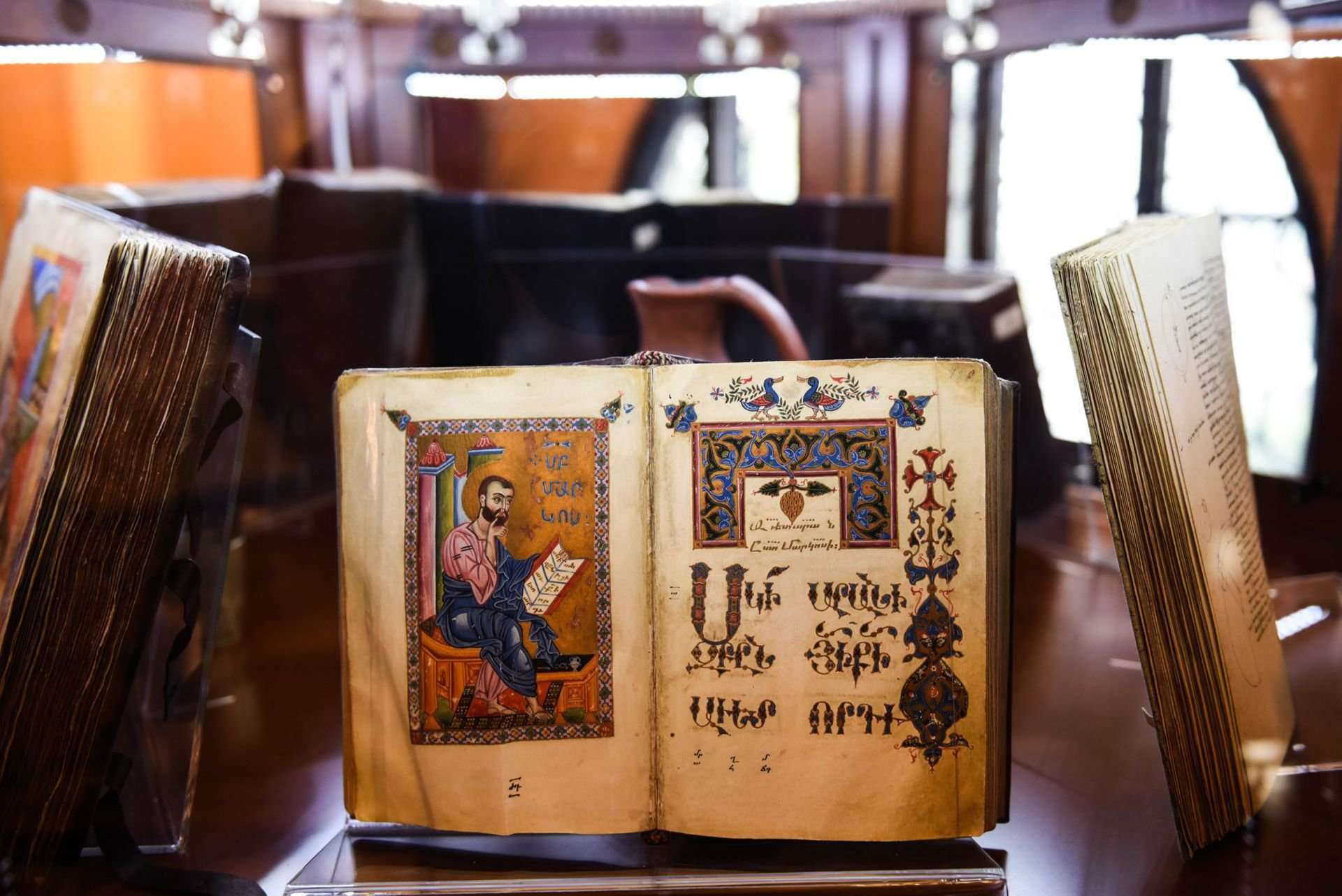 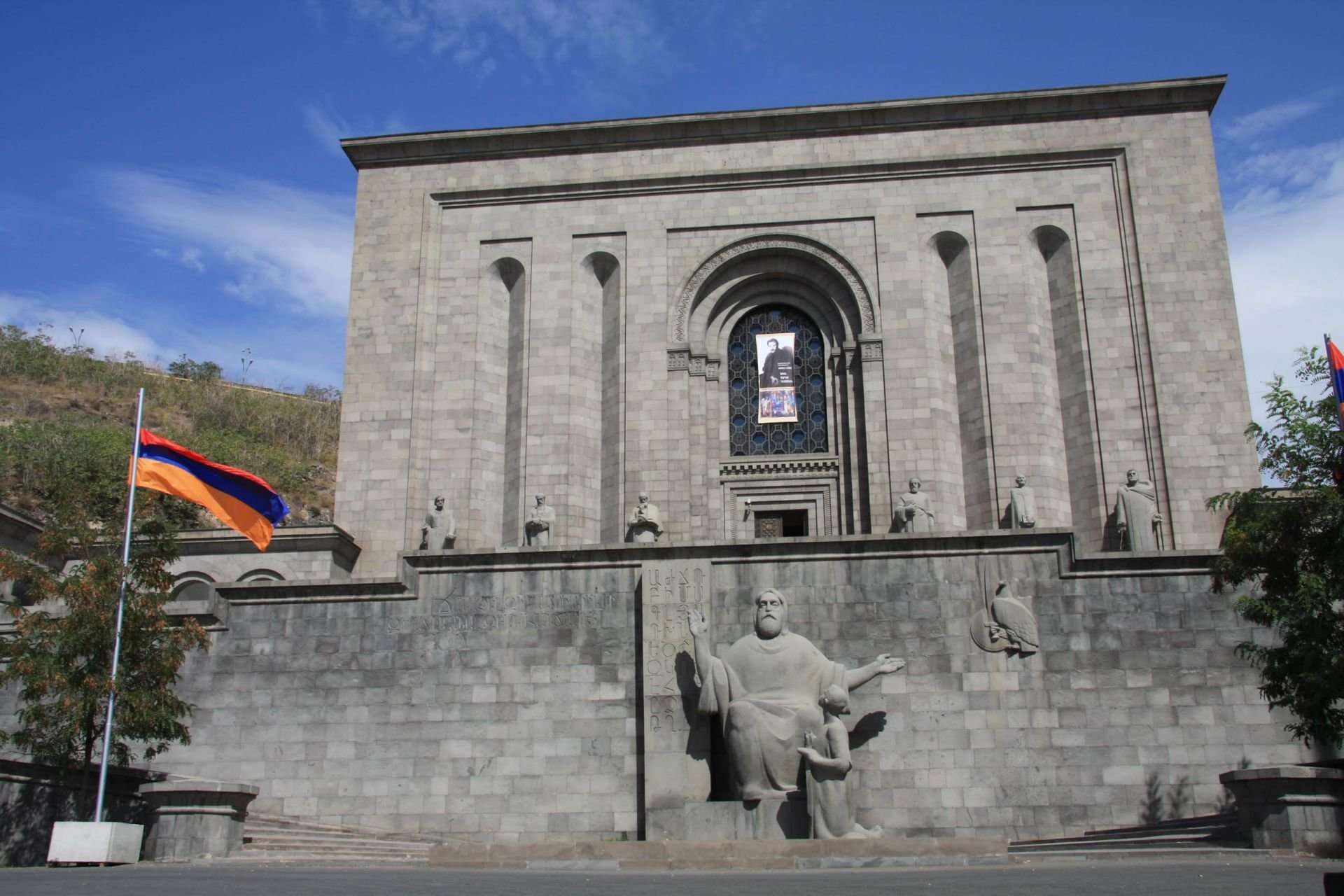 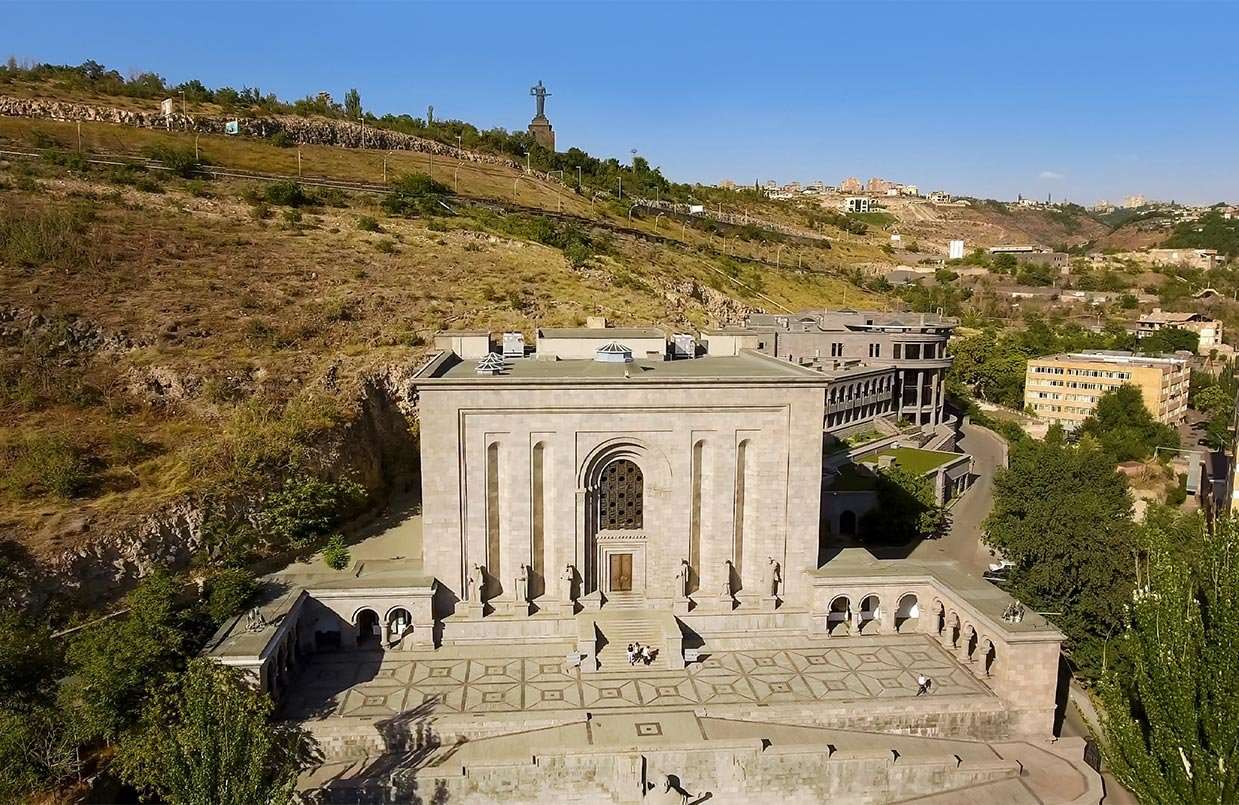 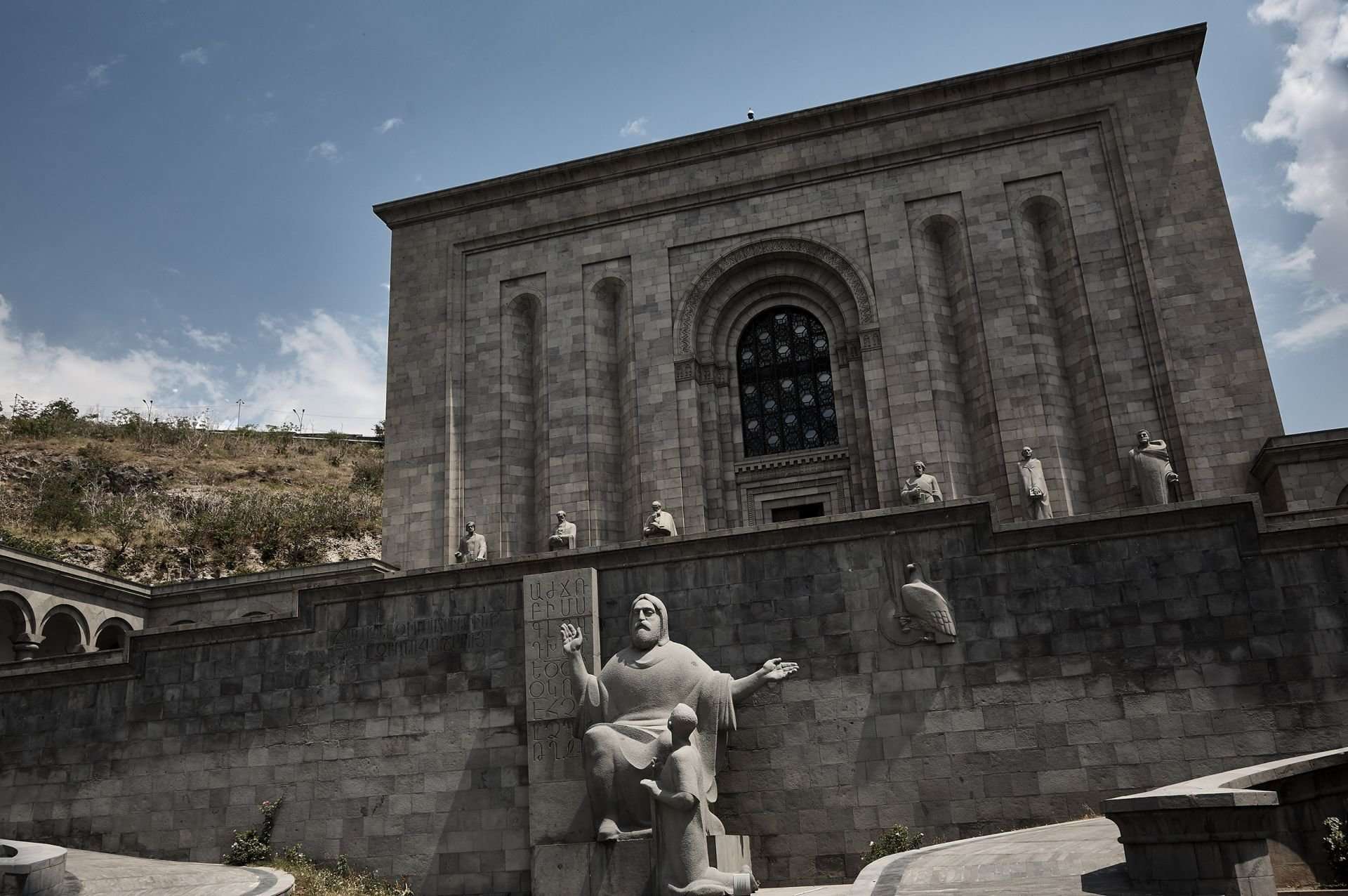 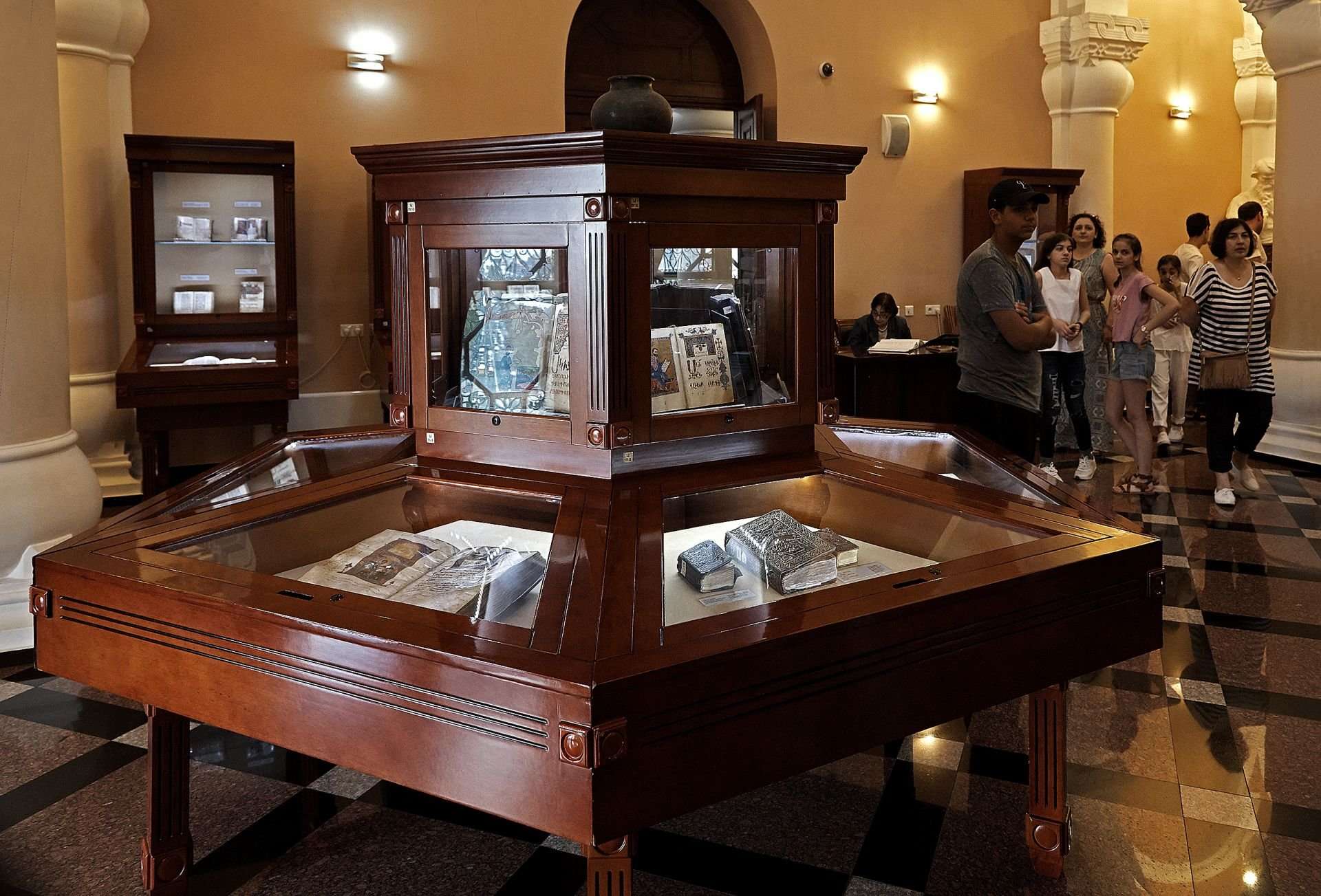 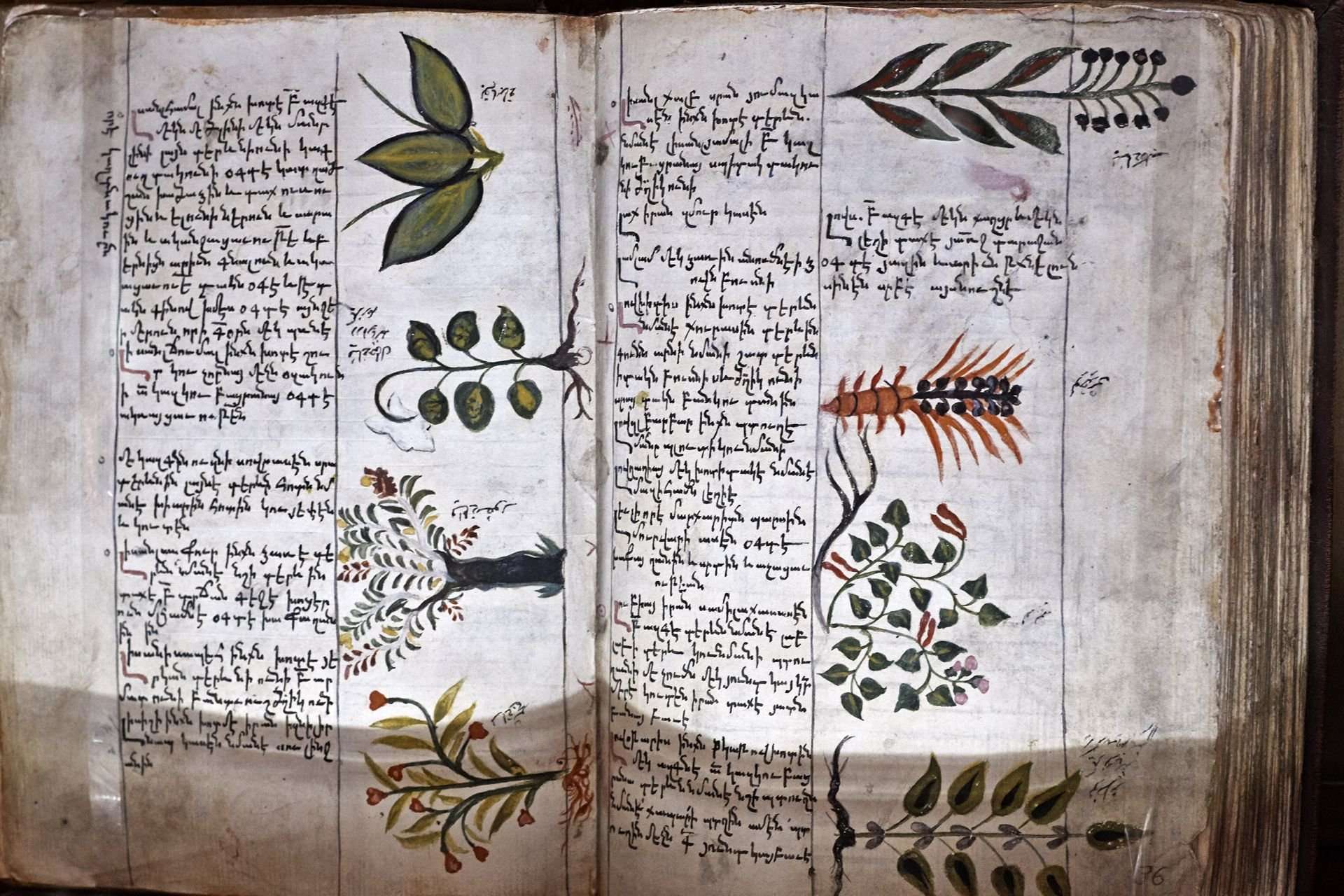 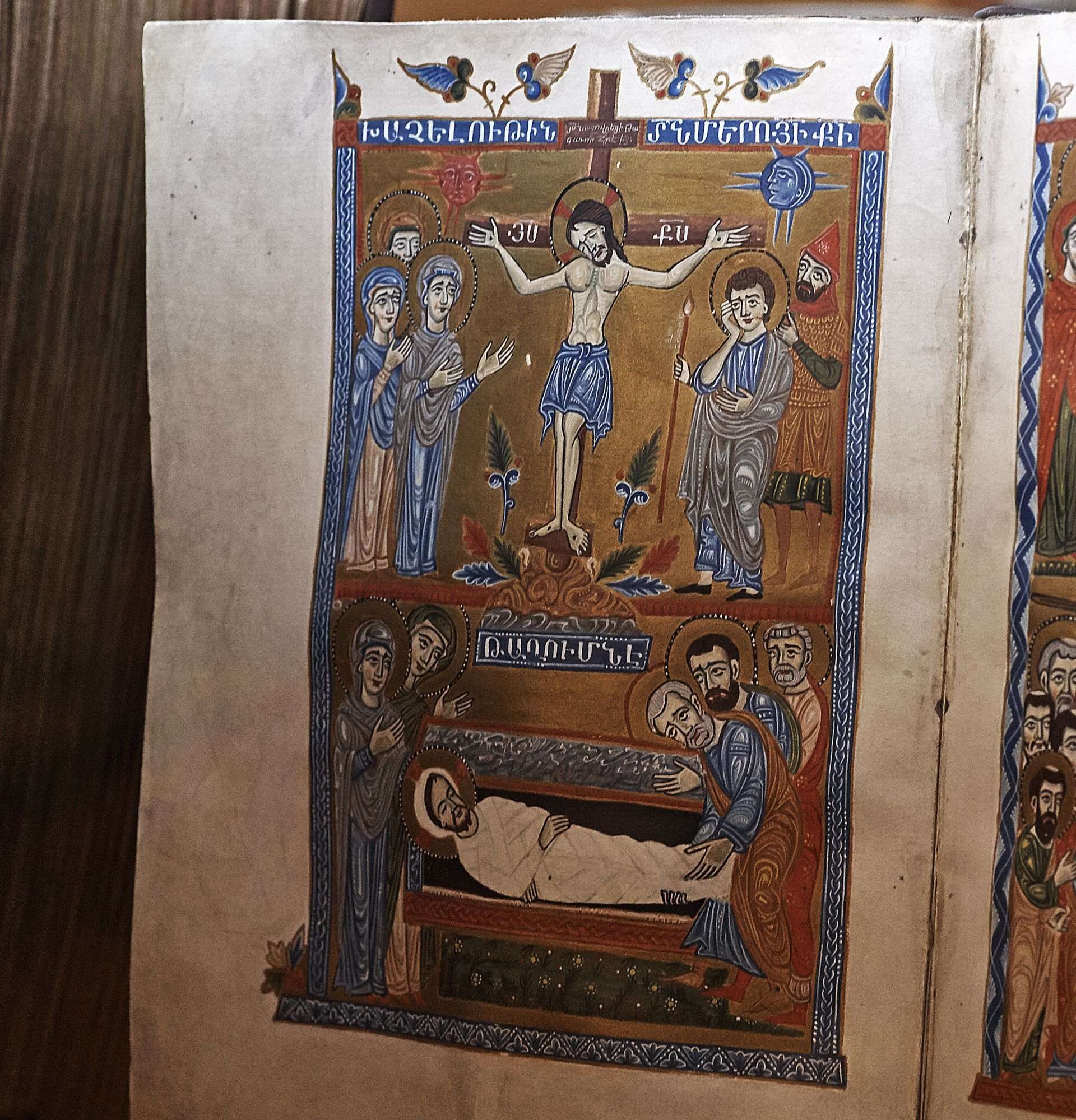 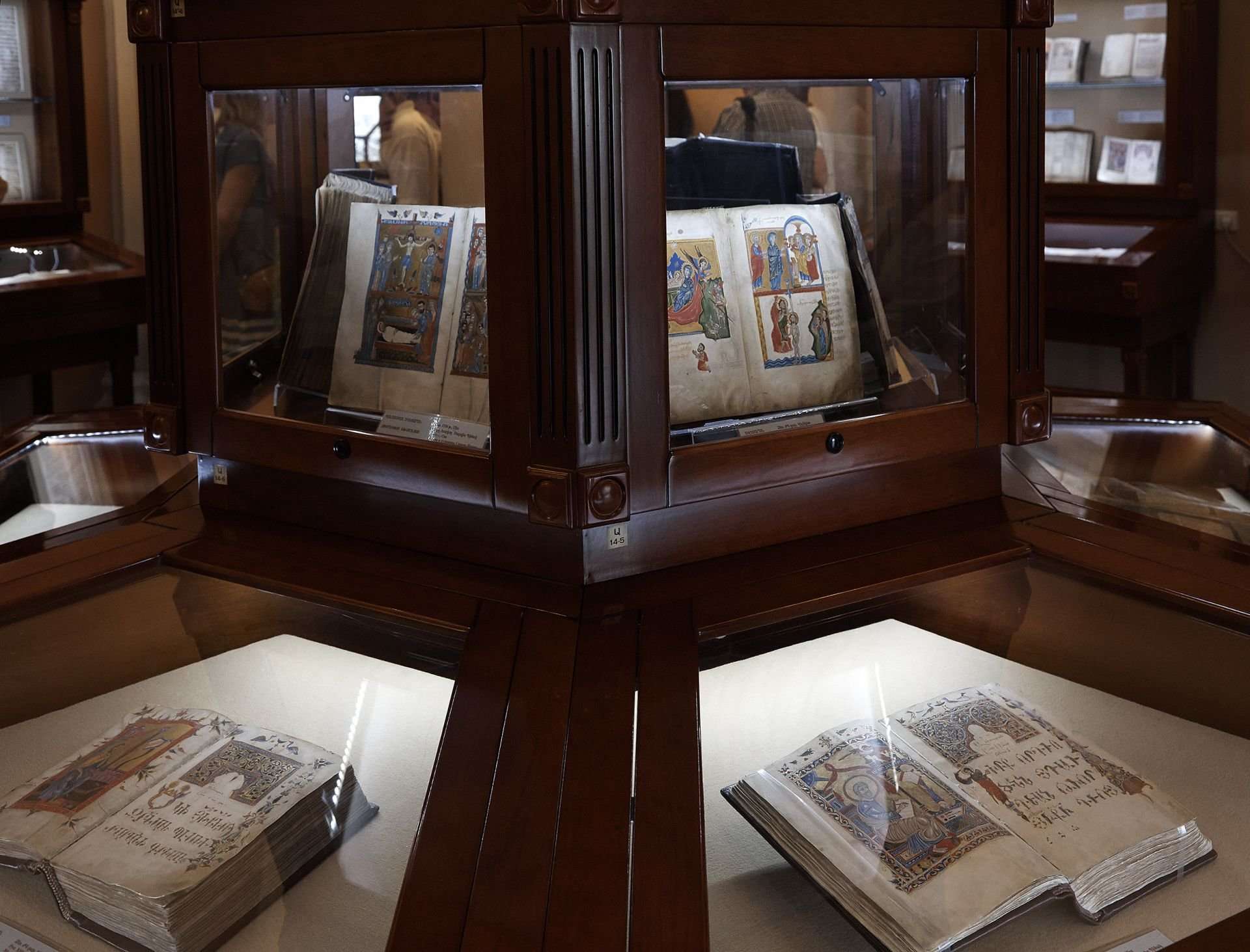 The Mesrop Mashtots Institute of Ancient Manuscripts, or as Armenians call it Matenadaran, is a repository of ancient manuscripts, research institute, and museum in Yerevan. It was built in 1921 and preserves the largest collection of manuscripts and medieval books in the world. The Matenadaran contains 23.000 manuscripts and scrolls with miniature patterns,including fragments as well asover 300,000 archived documents have been stored here over many centuries. In 1997, the collection of manuscripts of the Mtenadaran was included in the UNESCO’s Memory of the World Register, as it represents a world heritage. Matenadaran was designed by architect Mark Grigoryan. It is located in the northern part of the city centre, at the slope of a small hill, which was built in 1945 and completed in 1957. The main stone for the construction of the interior is basalt, although some parts of the halls are decorated with marble as well. In the 1960s, the statues of the Armenian historians Toros Roslin, Grigor Tatevatsi, Anania Shirakatsi, Movses Khorenatsi, Mkhitar Gosh, and Frik were erected on both sides of the building. The statues of Mesrop Mashots and his student Koryun right next to him are located on the lower part of the complex on which the main building rises.

On May 14, 2009, Matenadaran celebrated its fiftieth anniversary, and the Armenian officials together with the leaders of the Armenian Apostolic Church began to initiate the plan of the construction of a new research institute, located near the Matenadaran. The construction was completed in 2011 by the architect Arthur Meschyan, who had begun designing the new building in the late 1980s. The preservation, restoration, and reproduction of the manuscripts, their procurement, the organization and cataloguing of Armenian manuscripts as well as the dissemination and publication of mostly historically remarkable Armenian manuscripts in the Armenian language are the main purposes of the Matenadaran.

Matenadaran is home to one of the richest manuscript and document collections in the world. More than 18,000 manuscripts and about 300,000 archived documents containing a wide range of topics such as theology, philosophy, historiography and history, geography, grammar, art and art history, medicine and science. Apart from the Armenian manuscripts, Matenadaran has an extensive collection of historical documents in over 2,000 languages including Arabic, Persian, Hebrew, Japanese and Russian.

The collection of the Matenadaran is rich in manuscripts which are especially specialized in historiography, theology and philosophy. The works by Movses Khorenatsi, Yeghishe and Aristakes Lastivertsi, who lived and worked during the classical medieval period, are preserved here, as well as the legal, philosophical and theological writings by other outstanding Armenian personalities. The writings by Grigor Narekatsi and Nerses Shnorhali, which are stored in the Matenadaran form the base of the medieval Armenian literature. The Armenian collection also consists of 2,500 Armenian examples, including distinguished manuscripts, such as the Etchmiadzin Gospel (989) and the Mugni Gospels (1060). Another famous manuscript in the collection is ‘Homilies of Mush’, created in the years 1200-1202 AD in Avak Monastery in Yerzenka, measuring 55.3 x 70.5 cm, weighing 27.5 kg (60, 6 lbs.), which contains 603 calfskin parchment pages. The book was discovered during the First World War and 1915 Armenian Genocide by two Armenian women in an isolated Armenian monastery in the Ottoman Empire. As the book was too heavy, they tore it into two parts, one half was wrapped in a cloth and buried, and the other part was taken to Georgia. In the end, two parts were brought to Armenia and the book was restored.

The Matenadaran is a top tourist destination in Yerevan. The building of the Matenadaran attracts with its neo-Armenian architectural style and also serves as a favourite spot for photographers.