Cafesjian Center for the Arts 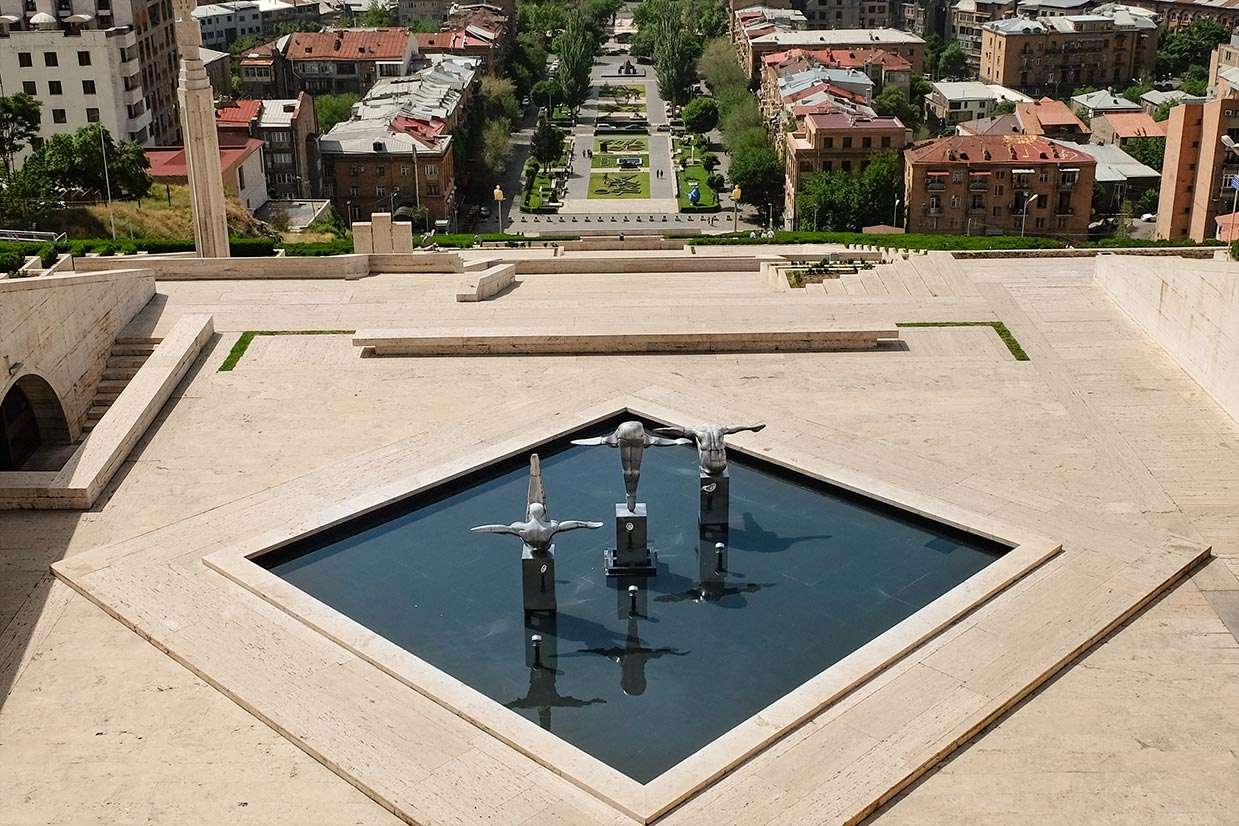 Gerard Leon Cafesjian (1925-2013) was a businessman and philanthropist, the founder of the Cafesjian Family Foundation, the Cafesjian Museum Foundation and the Cafesjian Center for the Arts. The Cafesjian Center for the Arts celebrated its opening in November 2009. The centre aims to represent contemporary art in Armenia and around the world. The complex offers a variety of exhibitions featuring more than 5,000 unique works of modern art, as well as a varied program of lectures, films, concerts and numerous educational initiatives for children and adults. Every year the centre welcomes more than one million people. The Cafesjian complex is located in a beautiful park, where one can unveil the sculptures by Botero, Flanagan, Chadwick, Plensa and Lalanne. This square overlooks the gigantic white stone cascade, which can also be reached on foot from the city centre directly into the Victory Park.

Cascade is a popular meeting place for spending leisure time and for relaxing, for beautiful strolls and interesting discussions. The museum is located inside the cascade complex of Yerevan and along the adjacent pedestrian street and gardens, near the entrance to the cascade in Tamanyan Street. The construction of the complex began in 1971, by the architects Jim Torosyan, Aslan Mkhitarian and Sargis Gursadian. The first phase of the plan was completed in 1980. The cascade is a complex with massive staircases and with fountains between the staircases. The total number of stairs is 572 and you climb up to 302 meters upwards.

Only between 2002 and 2009 the complex was developed and the museum was opened by the Cafesjian Family Foundation. The art centre project was designed by David Hotson Architects from New York. The New York Times described it as "a crazy work of architectural megalomania, one of the strangest and most spectacular museum buildings ever opened". The museum consists of 2 separate sections: the external "Cafesjian Sculpture Garden" and the internal "Cafesjian Art Galleries". The Cafesjian sculpture garden is located in the front garden of the cascade, where many sculptures are exhibited. Sculptures are also demonstrated on the garden terrace along the massive steps and fountains. With wide walkways, endless views and formal garden areas, it has been specially designed by outstanding artists to create a modern environment for large-scale sculptures. The "Cafesjian Art Galleries" consists of the Gallery-One, the Khanjyan Gallery, the Eagle Gallery, the Sasuntsi Davit Garden Gallery, the Star Landing and the Special Events Auditorium under the exterior staircase and fountain. The galleries house a large collection of glass artworks exhibited in various galleries and sections, permanent and temporary exhibitions. In the Khanjyan Gallery, there is the large mural triptych called "History of Armenia" by the famous Soviet and Armenian painter Grigor Khanjyan.

The Sasuntsi Davit Gallery contains a bas-relief of Artashes Hovsepyan representing the scenes from the Armenian fable epic "David of Sasun". Most of the museum's collection comes from the private collection of its founder Gerard L. Cafesjian. With more than 5,000 works, the centre presents one of the most extensive glass collections in the world, in particular, the works of the Czech couple Stanislav Libenský and Jaroslava Brychtová, whose collaboration has revolutionized the use of glass as an artistic medium. Other famous glass artists in the collection are Dale Chihuly, Bohumil Elias, Pavel Hlava, Jaromír Rybák, Ivana Šrámková, Bertil Vallien, Lino Tagliapietra, Mark Peiser and Hiroshi Yamano. The collection also includes significant paintings, sculptures by many influential artists such as Fernando Botero, Arshil Gorki, Jennifer Bartlett, Lynn Chadwick, Barry Flanagan, Jaume Plensa and François-Xavier Lalanne. The museum regularly organizes programmed events throughout the year.