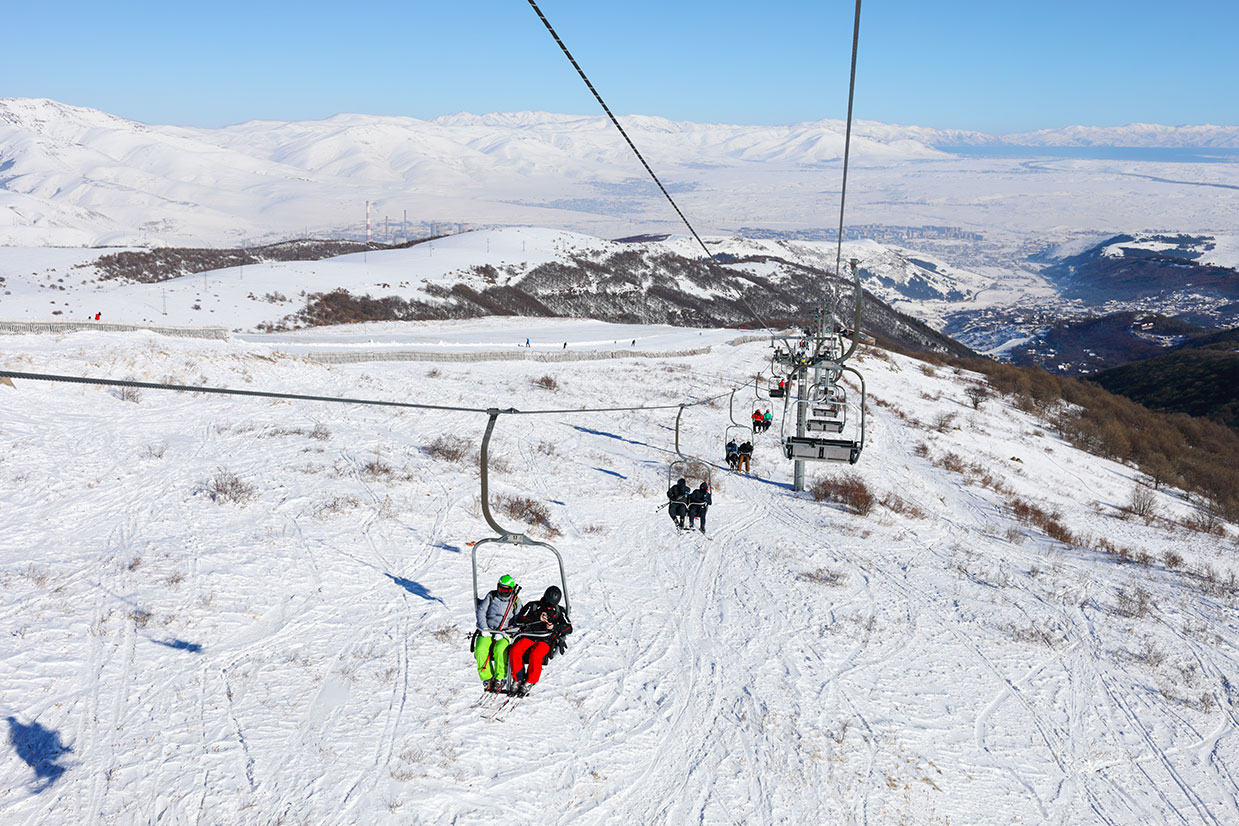 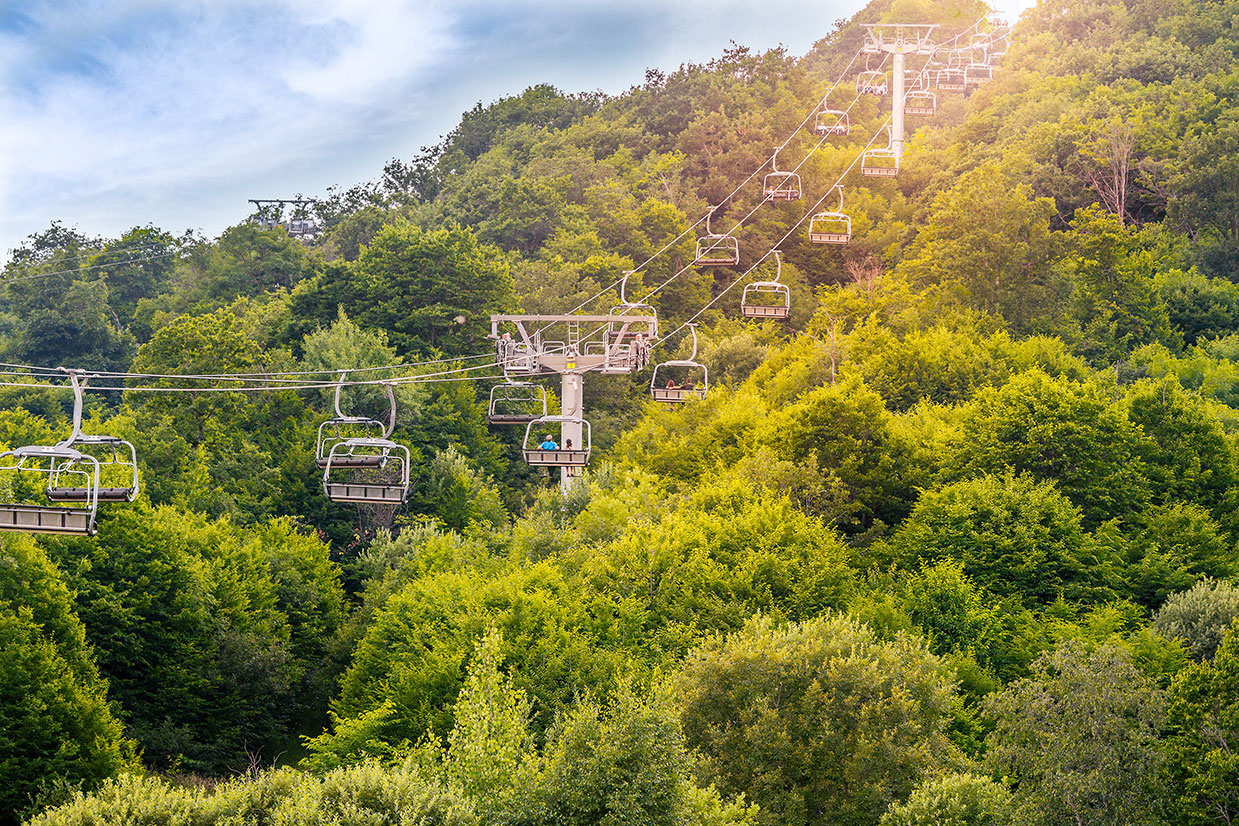 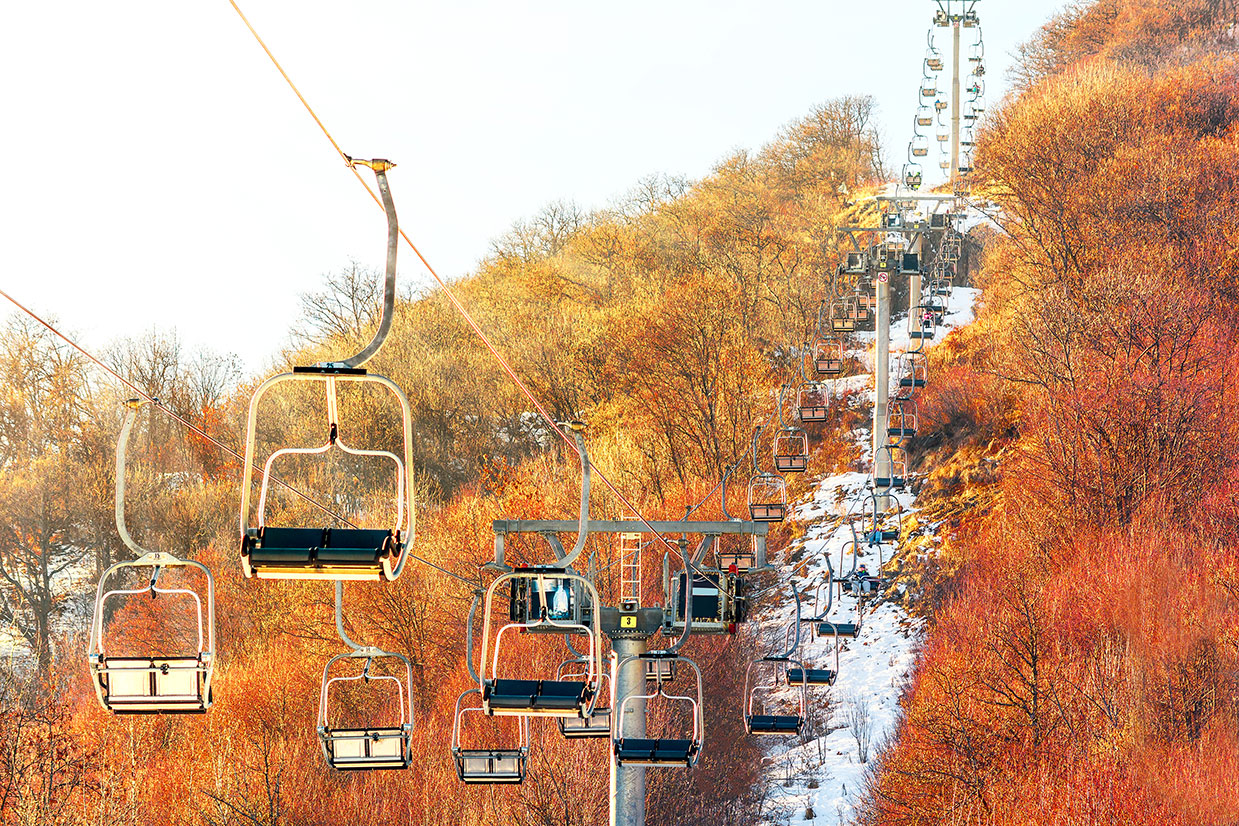 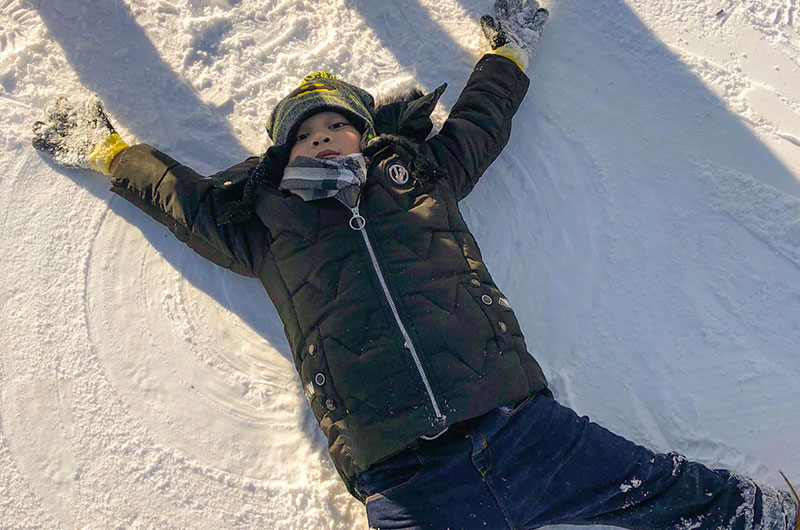 Tsaghkadzor is a truly magnificent place, where the beauty of nature expresses herself in all its variety. The view of the magical Lake Sevan and the biblical Mount Ararat together with the amazing grace of the gorge is breathtaking and timeless. In the 14th century, the settlement was still an insignificant hamlet. Only in 1984, the village was declared a town. Today, top athletes are trained here. Moreover, Tsaghkadzor is one of the most famous holiday resorts in the country. As the most important sports ground of Armenia, the "large and the small clearings" spread over 65 ha in the southwest of the village at 2000 m above sea level. The beautiful city of Tsaghkadzor (Flower Gorge) is located only 50 km from Yerevan in the province of Kotayk and is about 40 minutes by car. It is situated on the southernmost slope of the mountain Tsaghkunyats, at an altitude of 2820 m above sea level.

Plan your winter holidays in this magnificent place! Let yourself be enchanted by the splendid landscape, surrounded by mountains and forests. Most ski slopes are suitable for both beginners and professionals. February is the best season to travel to Tsaghkadzor, as it is fully covered with snow. Be pampered in hospitable restaurants and taste a variety of unique traditional specialities. For leisure and recreation, there are also many opportunities, such as swimming pools, saunas, billiards, table tennis, bowling, cinemas, and discos. The weather in Tsaghkadzor is mild. It usually snows a lot here and sometimes it is cold, although the weather is not severe. The ski season opens at the end of November and lasts until mid-April. The summers are mild with a cool breeze in the evening.

Tsaghkadzor has only 2000 inhabitants. It is a town of open-hearted, serene and friendly people who are ready to help every single person in need. One thing that is worth mentioning about these people is their developed culture for winter sports and activities. This town has always been a popular place not only for athletes but also for famous scientists and politicians. The marvellous monastic complex of Kecharis which was built between the 11th and 13th centuries can also be uncovered in Tsaghkadzor. Kecharis belongs to a few monasteries where one can meet the coral heads of the different churches. It is one of the well-preserved examples of medieval architecture in Armenia.

Anyone who wants to travel to Armenia has definitely heard of the unique Armenian khachkars (cross-stones). The territory of Kecharis Monastery is rich in khachkars, with ornaments and symbols that cannot be revealed on any other cross stone. Most popular one is the khachkar tomb of architect Vetsik, who is believed to have built the church of Katoghike. Orbeli Brothers Museum is a former residence of Ruben, Levon and Joseph Orbelis, who were outstanding Armenian scientists. Ruben Orbeli was one of the most well-known and brilliant specialists in marine engineering, his brother Levon was a psychologist and a member of the academics of science of USSR, and Joseph Orbeli was the founder and first president of the Academy of Sciences. The house of Orbeli brothers is one of the most visited sites in Tsaghkadzor. You can enjoy a ride on a cable car any time of the year. The cable car consists of four levels, all of which are equipped with Austrian seat lifts. The ride will take about 40 minutes to reach the top of the Mount Teghenis. Tsaghkadzor is exquisitely beautiful in winter due to its wide variety of winter sports activities. Here you can go skiing, snowboarding, sledding, and snowmobiling. Brave climbers can conquer the highest slopes of Teghenis Mountain and climb all the natural forests of this wonderful town. Some prefer to reach the summit with the help of cable cars. Tsaghkadzor's cable car is one of the longest ones in Armenia. In addition, a wide range of activities for those you search for energetic holidays is offered in the spring and summer periods, such as volleyball, football, basketball, Olympic swimming pool (even in winter), mountain climbing, hiking, horseback riding, and cycling.