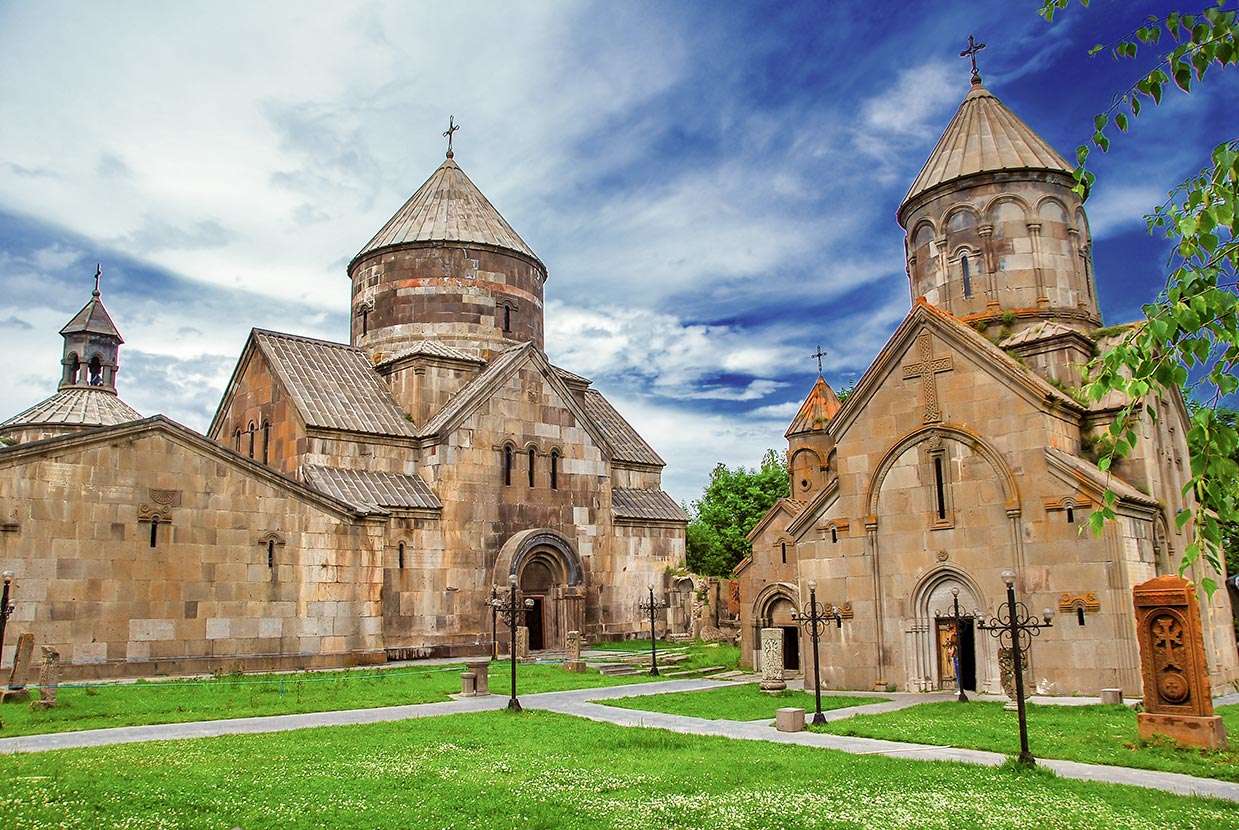 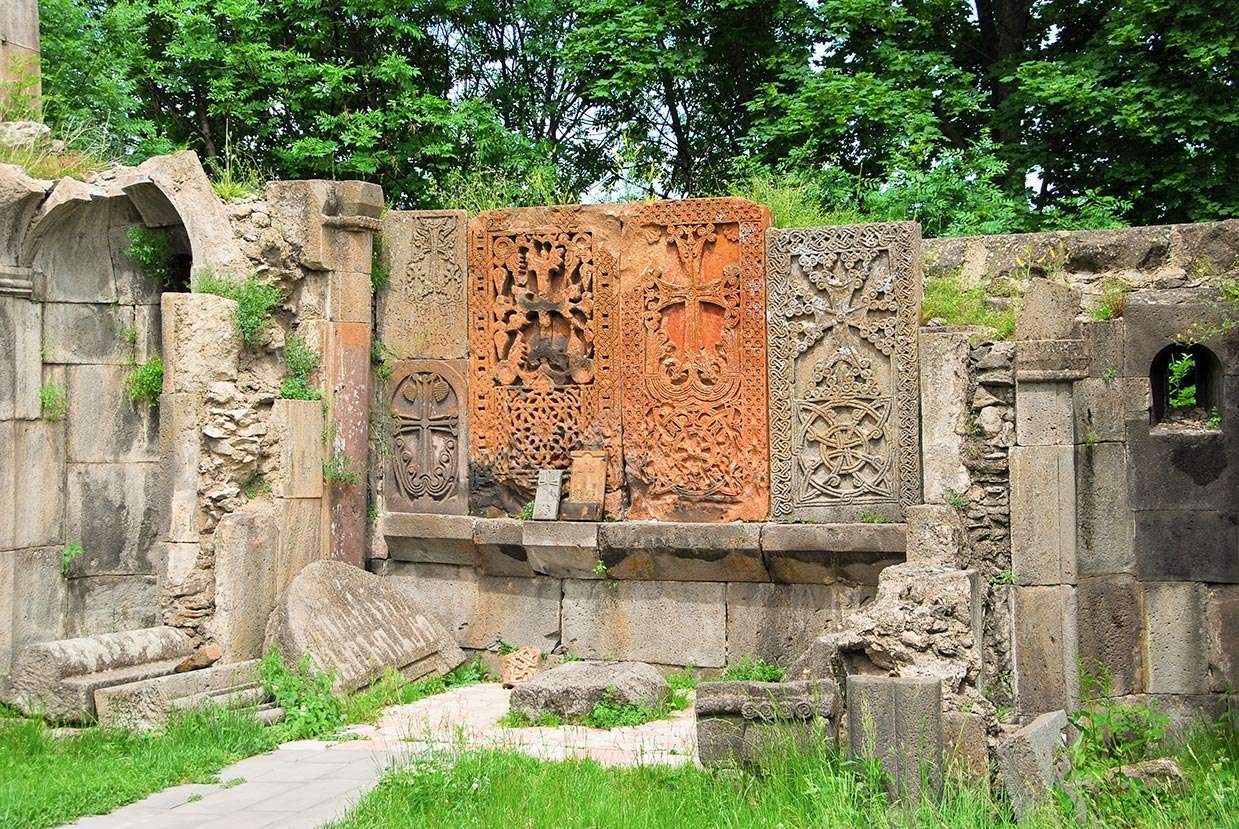 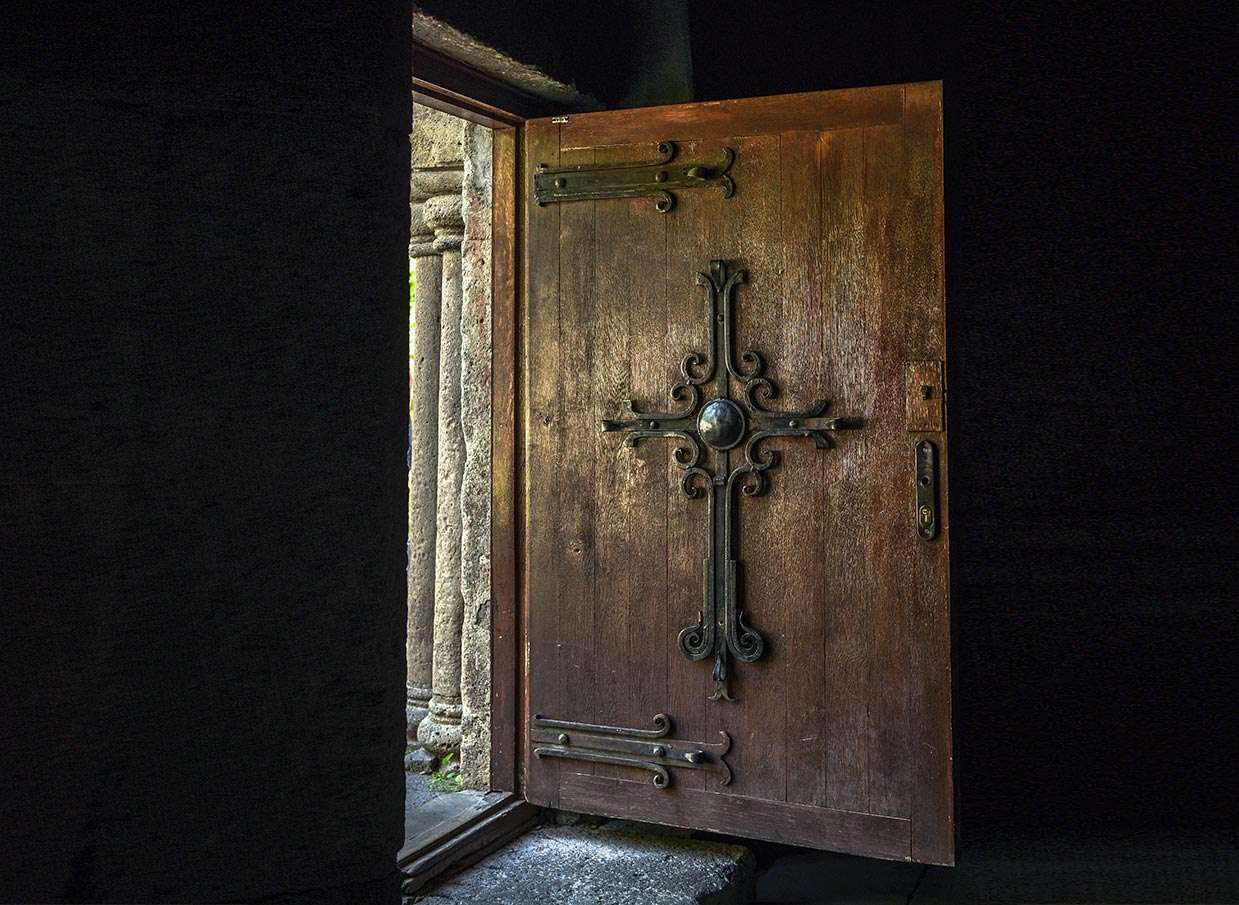 Kecharis Monastery is a medieval Armenian monastery constructed from the 11th to 13th centuries, 60 km from Yerevan, in the ski resort town of Tsaghkadzor. The majestic monastery, located in Pambak Mountains, was founded by a Pahlavuni prince, who started the construction in the 11th century, which lasted until the 13th century. In the 12th and 13th centuries, Kecharis was a significant religious centre and an important educational institution. Nowadays, the church has been entirely reconstructed and those who ski down the mountain, have a chance to reveal the monastic complex from afar. The monastic complex consists of three churches, two chapels, and a narthex . Not far from Kecharis there is a small church of Holy Resurrection with its own sacristy, which served as the funerary church. Many tombstones can still be discovered around this church. The oldest structure of the complex is the Grigor Church, which is located in the northeast of the complex and is the largest building in the centre. To the south of Saint Grigor Church, probably built in 1051, a small single-nave dome church was constructed, which is dedicated to the sacred sign, and is called Surb Nshan.

The third church is called Katoghike. Here you may explore an inscription dating back to 1214. This church is distinguished from the other two by the abundant decorations on the west facade. The main temple, the church of St. Grigor, is the first building of the monastery, which was built in 1013 by Grigor Magistros Pahlavuni. It is unique in its style. The interior of the temple is divided into three rooms. The dome and pendentives were destroyed by an earthquake in 1927 and reconstructed in 2000. The semicircular altar apse has two-storey sacristies on both sides. Three triangular niches behind the altar provide the light within the building. The base of the altar has carved geometrical ornaments alternating with rosettes in some places. The Katoghike (cathedral) Church is located south of St. Nshan and is divided by a narrow passage. According to an inscription, the patron of the church was Prince Vasak Chakpakyan (in the 13th century) and was designed by the architect Vetsik. Katoghike Church is one of the cross-wing dome types and has two-storey extensions in all four corners of the prayer hall. Stone stairs lead to the western outbuildings of the first floor. The decoration of Katoghike Church is linked to the artistic traditions of the construction period. The round dome drum was destroyed by earthquakes in 1927 (also rebuilt until 2000) and decorated with a 12 arch forms. The front wall of the altar is decorated with carved crosses. On the walls and on the spherical pendentives of the dome you may find rosettes with flat arch motifs.

The town, where Kecharis is located, is also a health, sports, and recreation resort. Before the Soviet era, Tsaghkadzor was an important health resort centre inhabited by the Russians. In Soviet times, the city had up to 30 pioneer camps and convalescent homes. Here in 1967, the main sports centre of the USSR and in 1969 the cable car was built, which made this town remarkable and popular. The cable car was completely renovated in 2007 by the Swiss-Italian company. The length of the cable car is 1.4 km, the duration is 20 minutes, maximum altitude 2234 m. The skiers ascend the mountain by the cable car. Tourists have the opportunity to organise their leisure time full of attractions in all seasons of the year in this spectacular place.