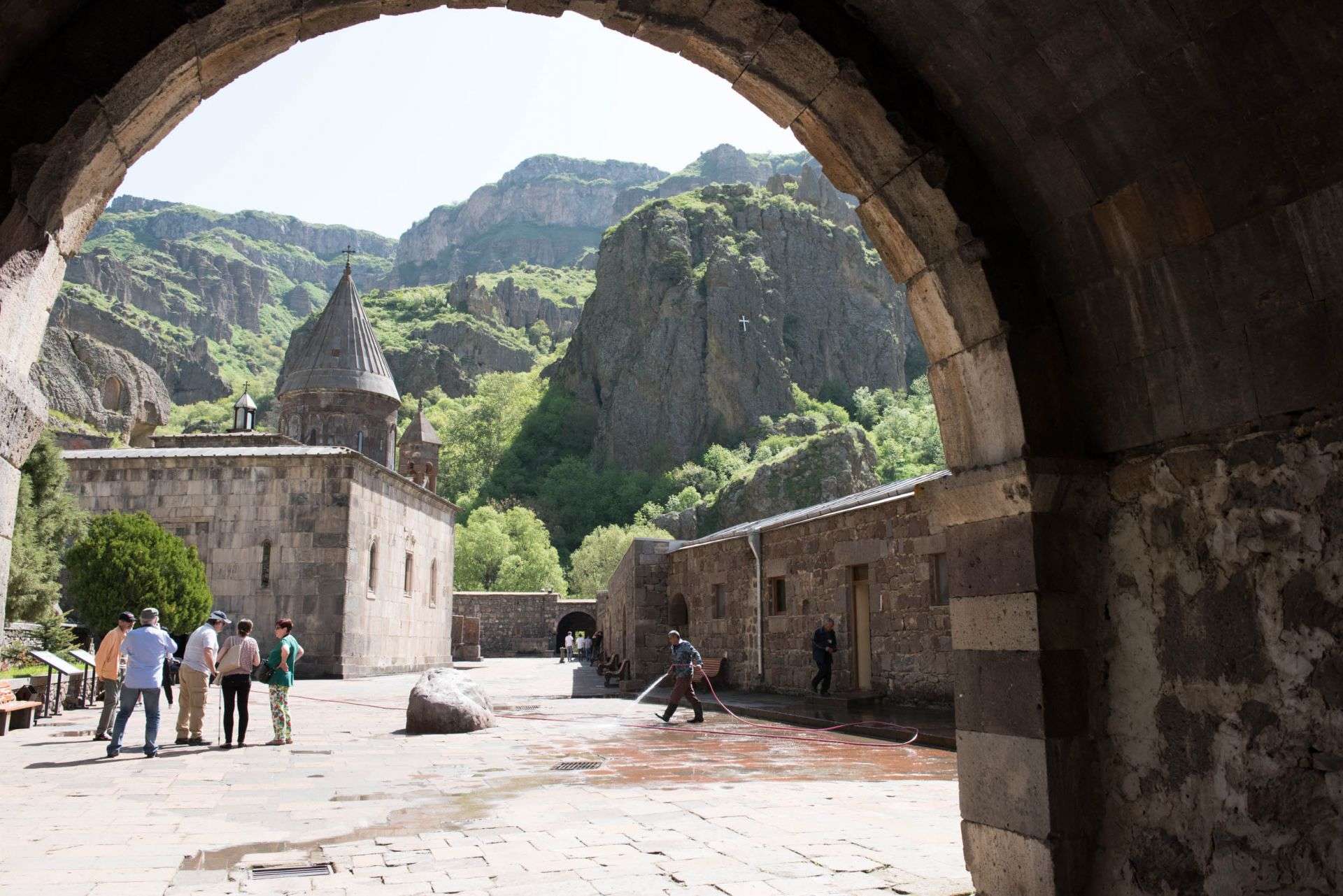 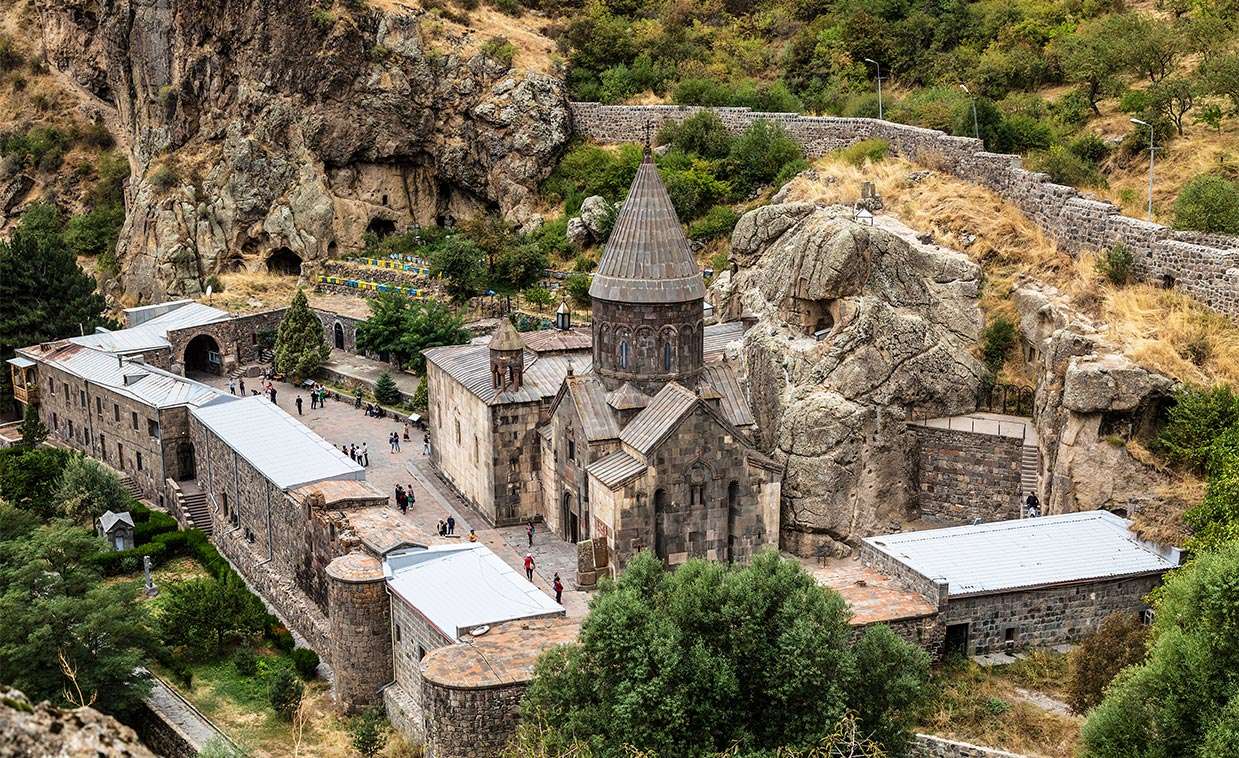 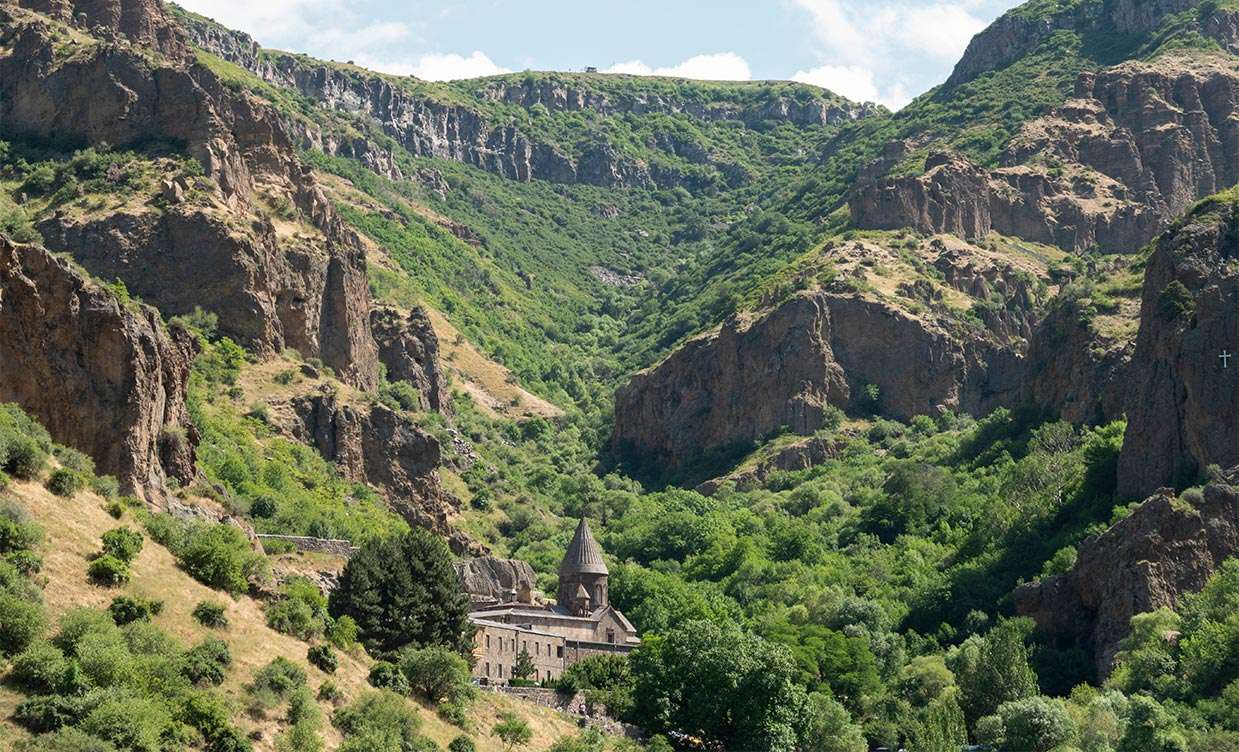 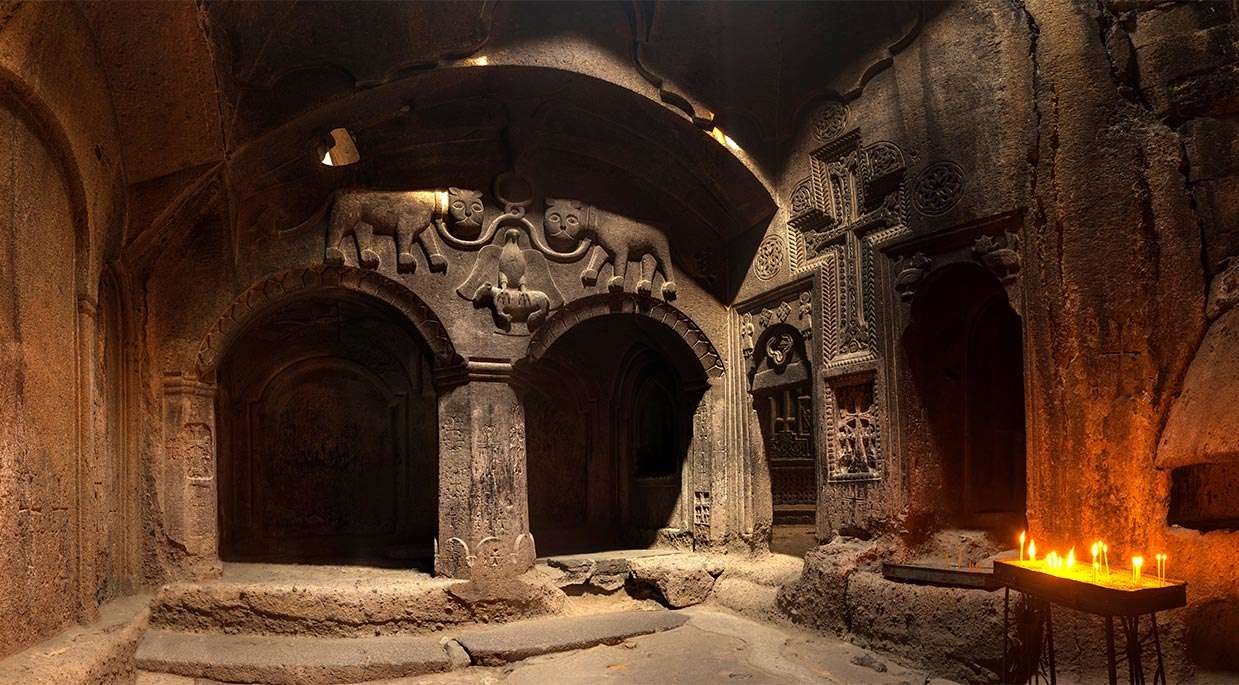 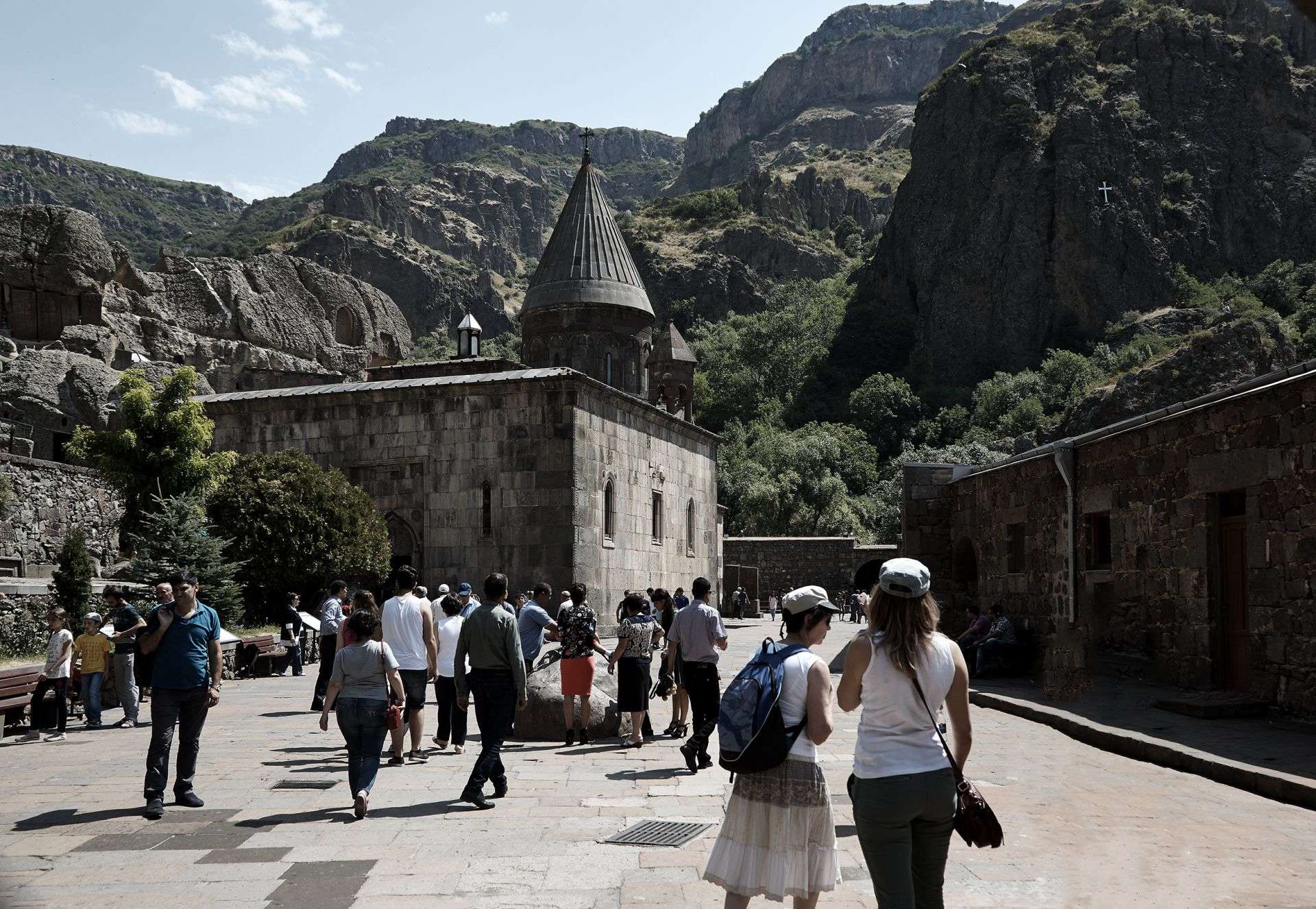 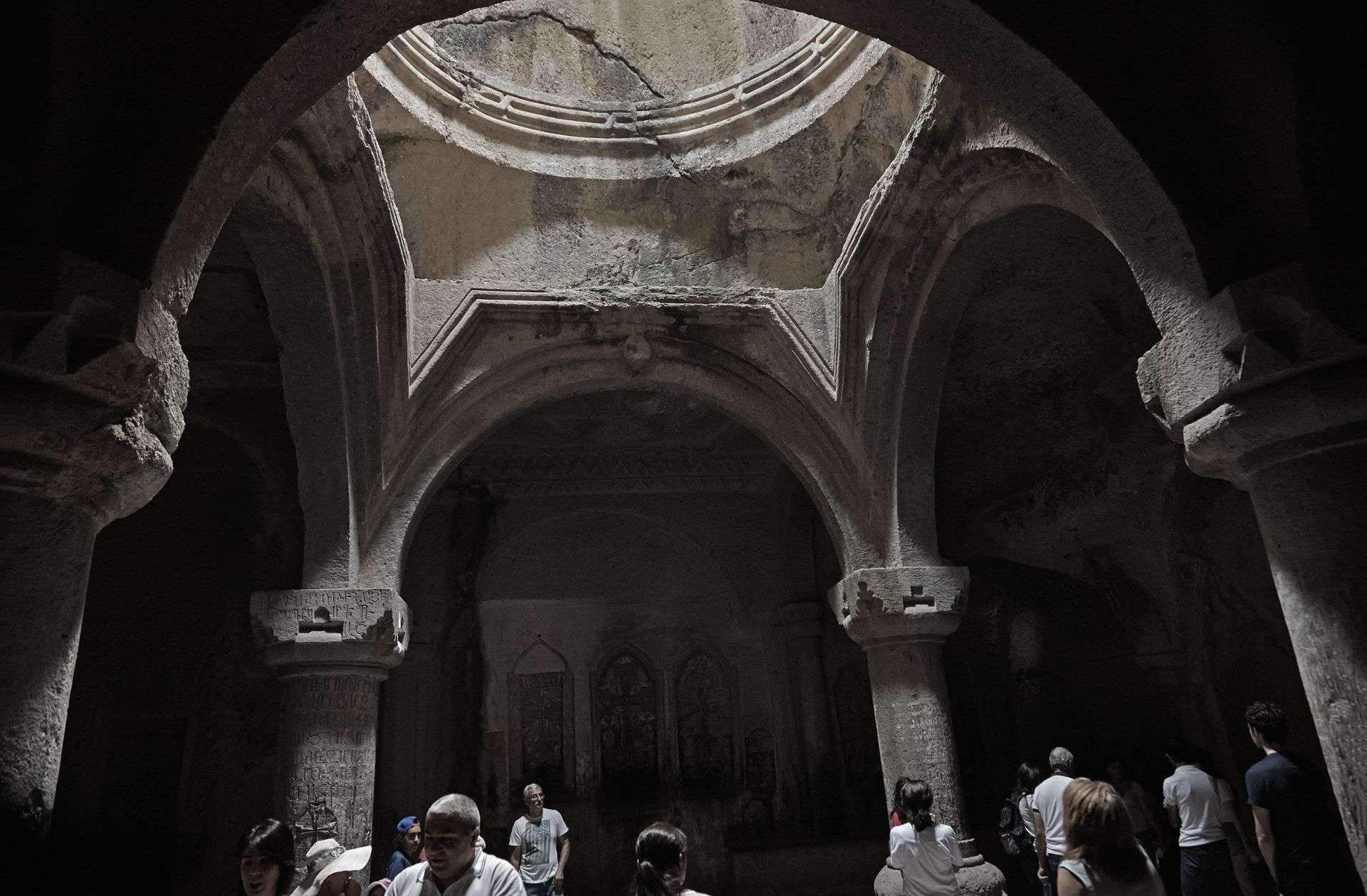 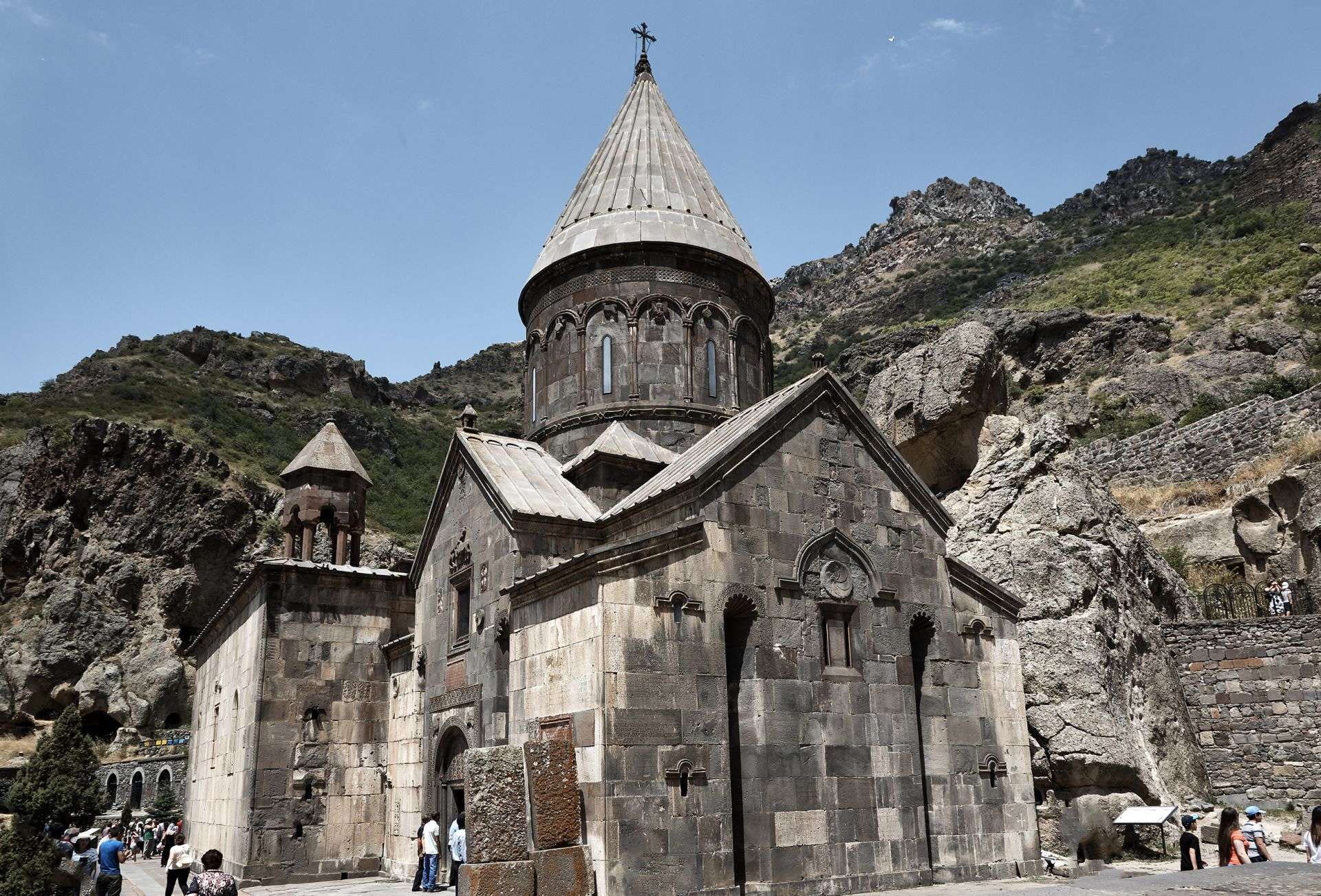 The rock monastery Geghard is a landmark of Armenian medieval architecture. It is exceptionally well preserved and stands at the entrance of the Azat Valley, at the foot of a rock wall towering in wild beauty. The monastery is located in the Kotayk Province. This province is located in the central part of the country. Its provincial capital is Hrazdan and the largest city is Abovyan. It is named after the Kotayk canton of the historical province of Ayrarat in ancient Armenia. There are many ancient sights and tourist attractions in the province, including the medieval Bjni Fortress and the 11th-century Kecharis Monastery. Kotayk is also home to the popular winter sports resort and the spa town of Tsaghkadzor and the mountain resort of Aghveran.

According to tradition, Gregory the Illuminator is the founder of the original monastery. It was built in the 4th century on the site of a sacred spring-well in a cave. The main chapel was founded in 1215. The monastery was originally called "Ayrivank", which means "monastery of the cave". Geghardavank, which means "spearman", comes from the spear that had wounded Jesus Christ and was brought here after Judas Thaddaeus. Now he is exhibited in Etchmiadzin. The spectacular towering cliffs that surround the monastery are part of the canyon of the river Azat and, together with the monastery, were included into the UNESCO World Heritage list. Some of the churches within the monastery complex are completely carved out of cliffs, others are more than caves, while some structures are elaborate buildings that represent both architecturally constructed sections and spaces deep inside the cliffs. The combination with numerous engraved and freestanding cross-stones is a unique sight are one of the most visited tourist destinations in Armenia. Most visitors to Geghard also visit the nearby pagan temple Garni, which lies further down the River Azat. Visiting both places in one trip is so common that they are often referred to as Garni-Geghard.

The monastery complex is at the end of the paved road. On the footpath, you can see many women selling sweet bread, dried fruit, typical Armenian sweets, and souvenirs. When approaching the main entrance, there are small caves, chapels, carvings, and constructions. In front of the entrance, there are some flat shelves (holes) on which people try to throw pebbles to fulfill their wishes. Right at the entrance of the site, there are the walls from the 12th to the 13th centuries that protect the three sides of the complex, and the cliffs behind protect its fourth side. At the side entrance to the east, there is a table for the sacrifice ritual of animals (Matagh) and a bridge over the stream. The one and two-story residential and service buildings, which are located on the edge of the monastery courtyard, were reconstructed several times, as in the 17th century and in the years 1968-1971. It is known that most of the monks lived in cells, carved into the rock wall outside the main enclosure, which was preserved along with some simple oratorios. The most beautiful cells are located on the eastern side. You can reach there over a staircase. The rock walls over the entire area carry elaborate relief crosses (khachkars).

The main building is the Mother of God Church, which is one of the most beautiful churches in Armenia. In 1225, the gavit (narthex) was added to the main church. In the northwest of gavit, there is the first rock church from the 13th century. Even deeper in the rock, the second rock church can be revealed. The monastery complex also includes Proshyan Crypt, upper gavit, rock chapels, khachkars, and caves. The beautiful architecture, breathtaking nature and rich history make this region an ideal tourist destination for those who are travelling in Armenia.