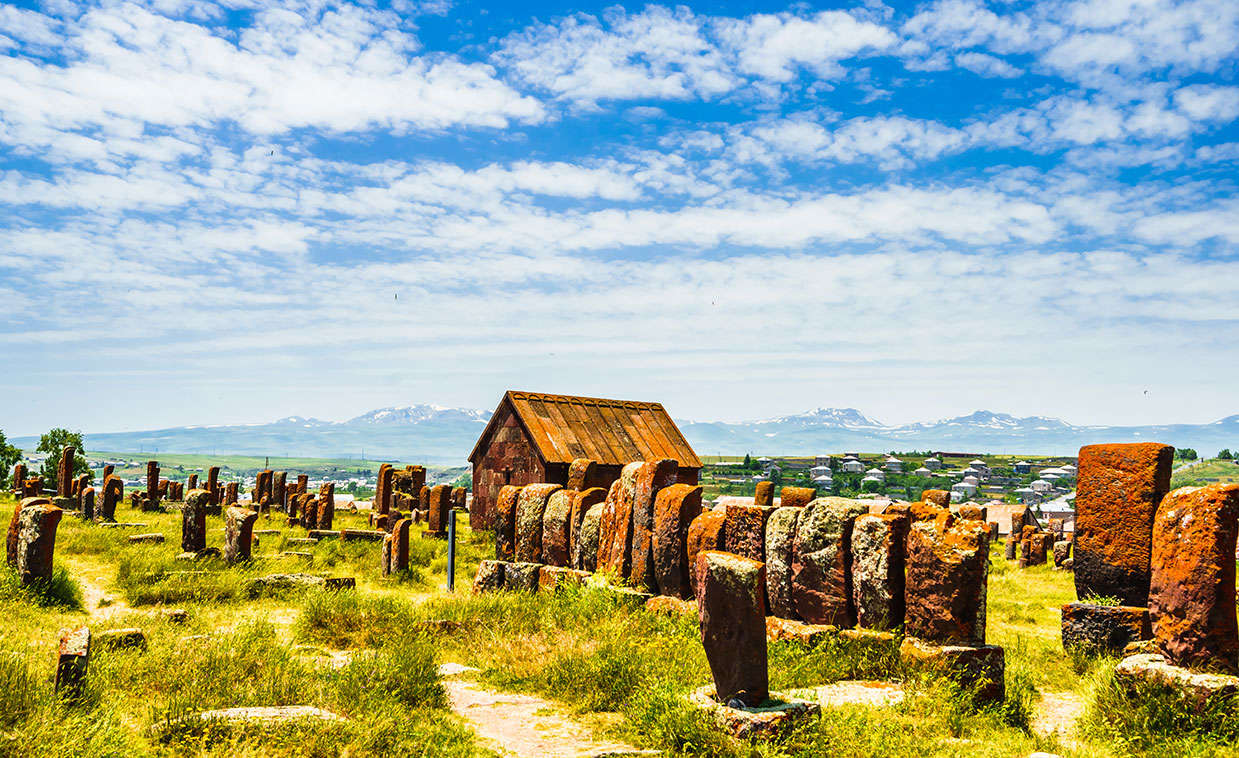 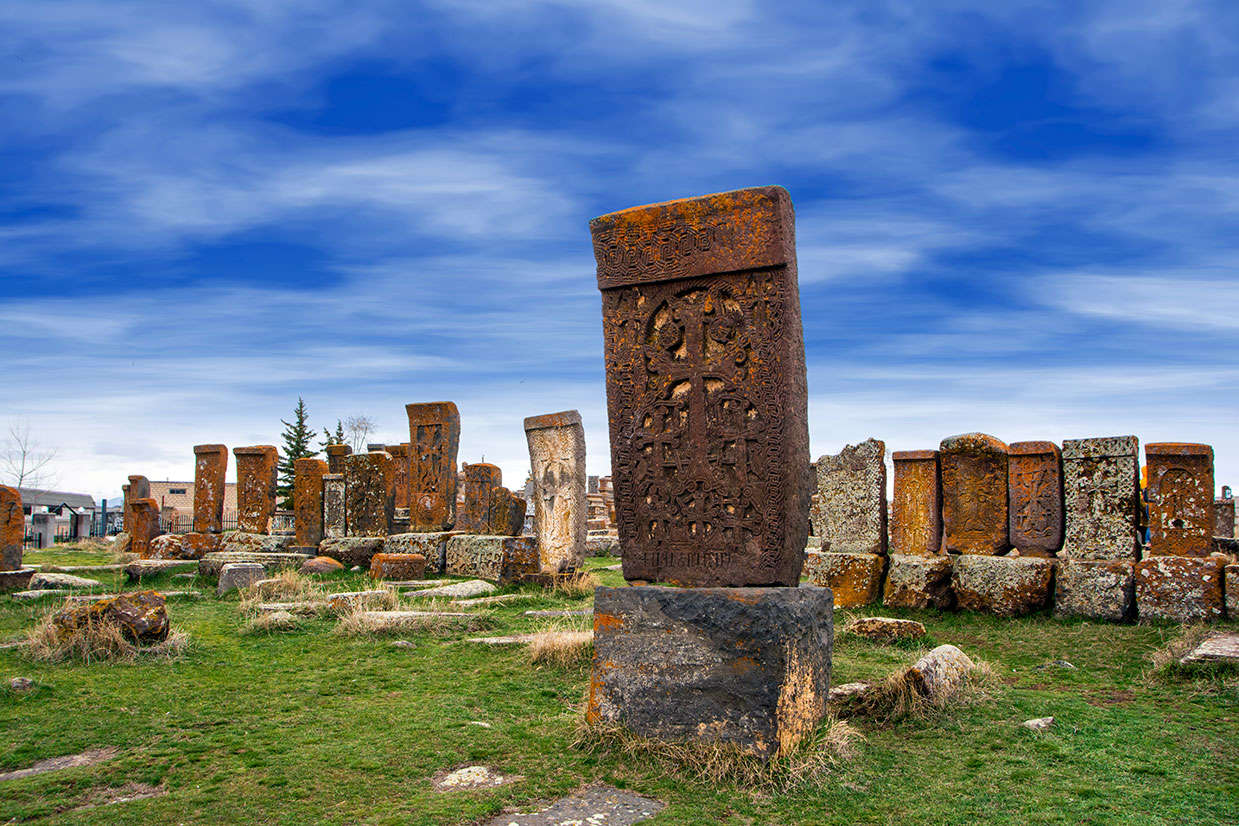 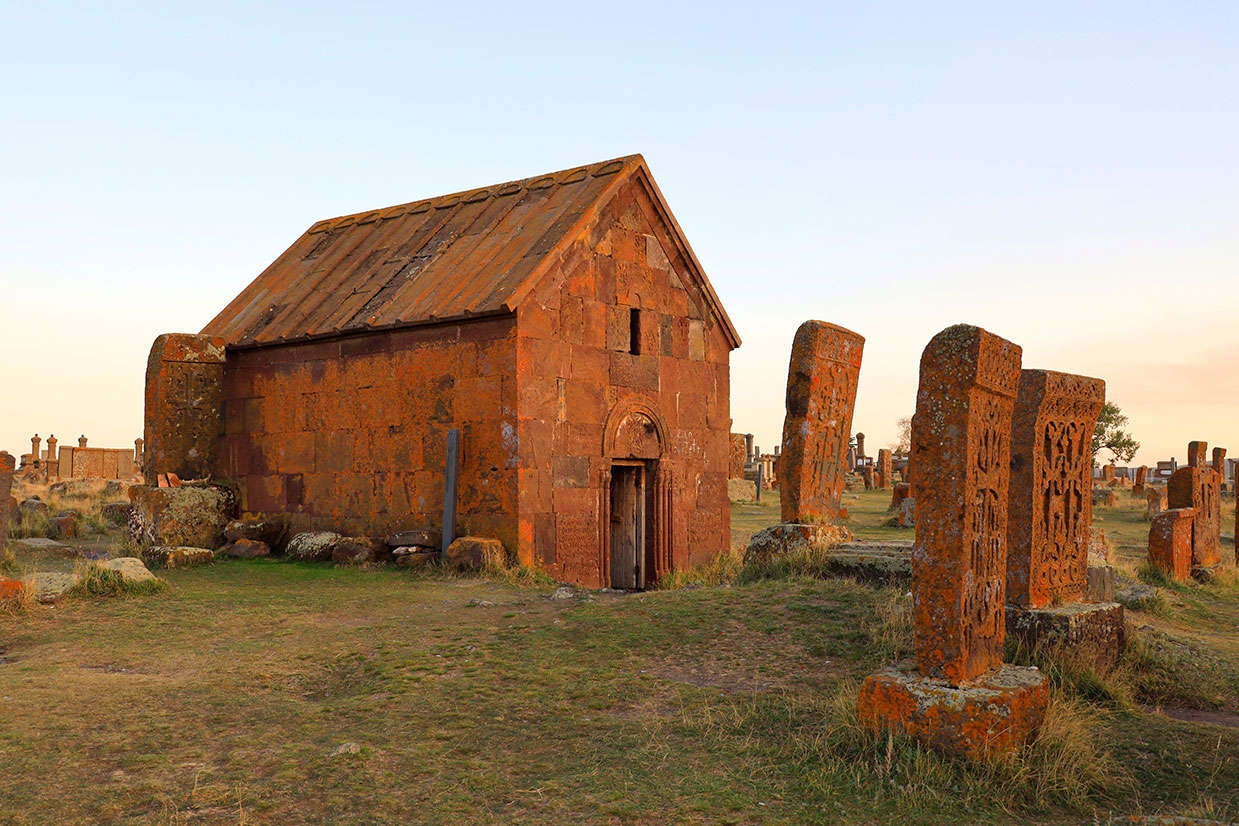 Noratus is a significant historic village in Gegharkunik province, near the town of Gavar. In the Middle Ages Noratus was mentioned as a large settlement. The megalithic fort dating back to the Bronze Age and located near the village, indicates that Noratus is one of the oldest continuously inhabited settlements in Armenia. Numerous medieval landmarks and records can be revealed in the village, as well as in the surrounding area. One of the most remarkable churches in Noratus is St. Astvatsatsin (Mother of God) Church, which is located in the centre of the village. It was constructed at the end of the 9th century by Prince Sahak of Gegharkunik. The church was a vaulted hall, built entirely of polished large stones. It was demolished in the last centuries and as it is said, the dome and the roof were ruined by the Lezgins. The immigrants from Alashkert have covered the village with timbers. There is a fence in the yard of the church, where numerous khachkars and tombstones can be found. The oldest record is engraved on one of the khachkars, which is now preserved in the State Museum of Armenian History.

The village is famous for the Noratus Cemetery. It is a medieval cemetery with a large number of early khachkars. The cemetery has the largest collection of khachkars in the Republic of Armenia. It is currently the largest surviving cemetery with khachkars after the destruction of the khachkars of Old Julfa in Nakhichevan by the government of Azerbaijan. The oldest khachkars in the cemetery date back to the late 10th century. During the Renaissance, of the khachkar tradition in the 16-17th centuries under the rule of the Safavid Empire, the oriental influence dominated over Armenian art. Three outstanding masters of the time of that time created khachkars in Noratus, however, the most remarkable one was Kiram Kazmogh (1551-1610), his contemporaries were Arakel and Meliset. The cemetery covers seven acres of land with more than 728 khachkars which represent unique ornaments of that period. Most of the khachkars are covered with plants like moss and lichen that are typical of this area. Some gravestones in the cemetery represent carved scenes of weddings and agriculture life. Near the old cemetery, a new one was built and a long fence between them divided it into two parts.

Not far from the cemetery the 9th century Holy Virgin’s Church can be uncovered. One of the khachkars from the cemetery was donated to the British Museum in 1977 by Catholicos Vazgen I. It was a rectangular khachkar with a cross resembling a leaf, with two smaller crosses below, framed by shamrocks and grapes, the inscription on the left, saying: "Seek God's mercy." There is a story about the cemetery telling of the conquest of Tamerlane’s army. It says that the villagers put helmets on the khachkars and leaned swords against them. From afar, the khachkars looked like armed soldiers occupying a defensive position, which made Tamerlan’s army move back. According to another popular story of the 19th century, the monk Ter Karapet performed burial ceremony from a monastery near the village of Noratus. To avoid the long round-trip from the cemetery to the monastery, which took him a couple of hours, he decided to build a small cell in Noratus. When he turned 90 years old, he asked his brothers to bury him alive. His last words were, "I'm not afraid of death, I do not want you to be scared. Fear for nothing but God alone. Who's scared, let me come in. Pour water on the tombstone, drink that water, wash your face, chest, arms, and legs, then break the vessel that contained the water, and the fear will leave you". Til today, people come to the monk's tomb to perform this ceremony, where they break the vessel and leave broken glass lying around.