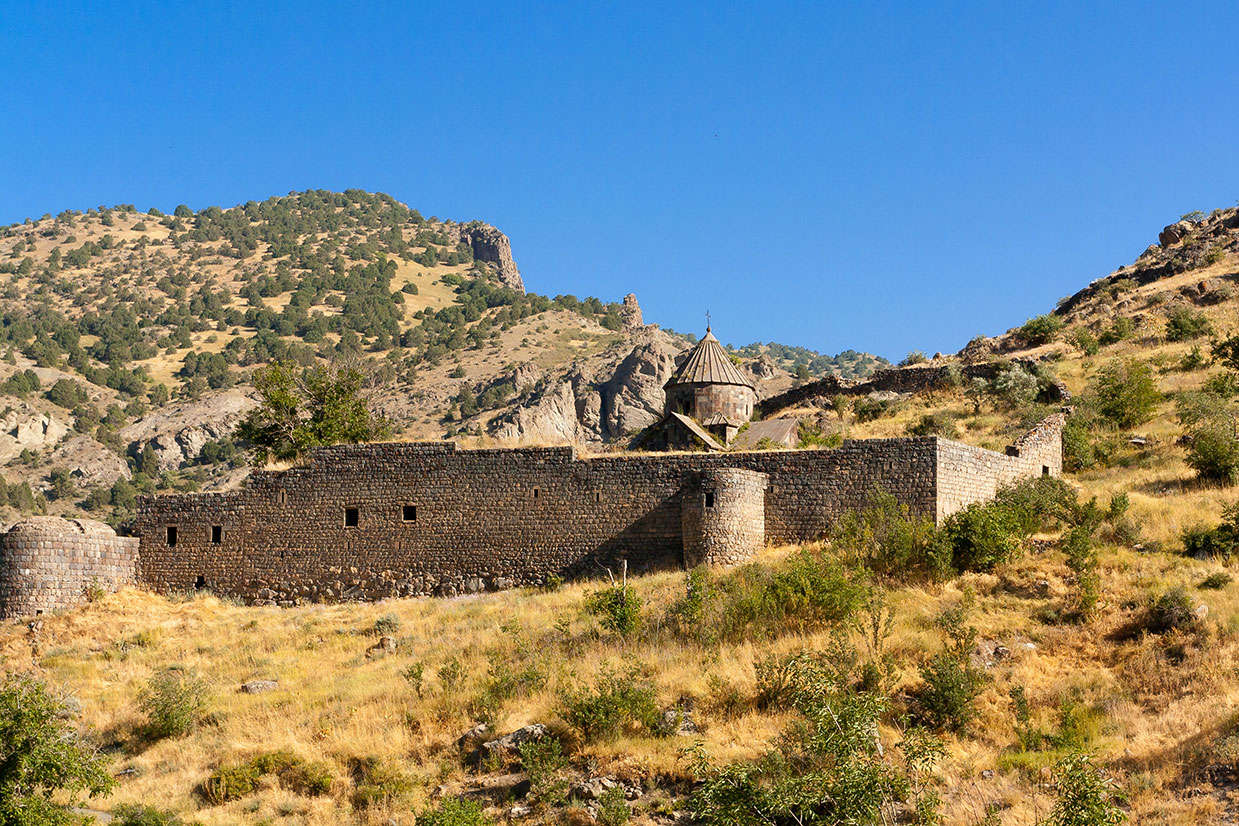 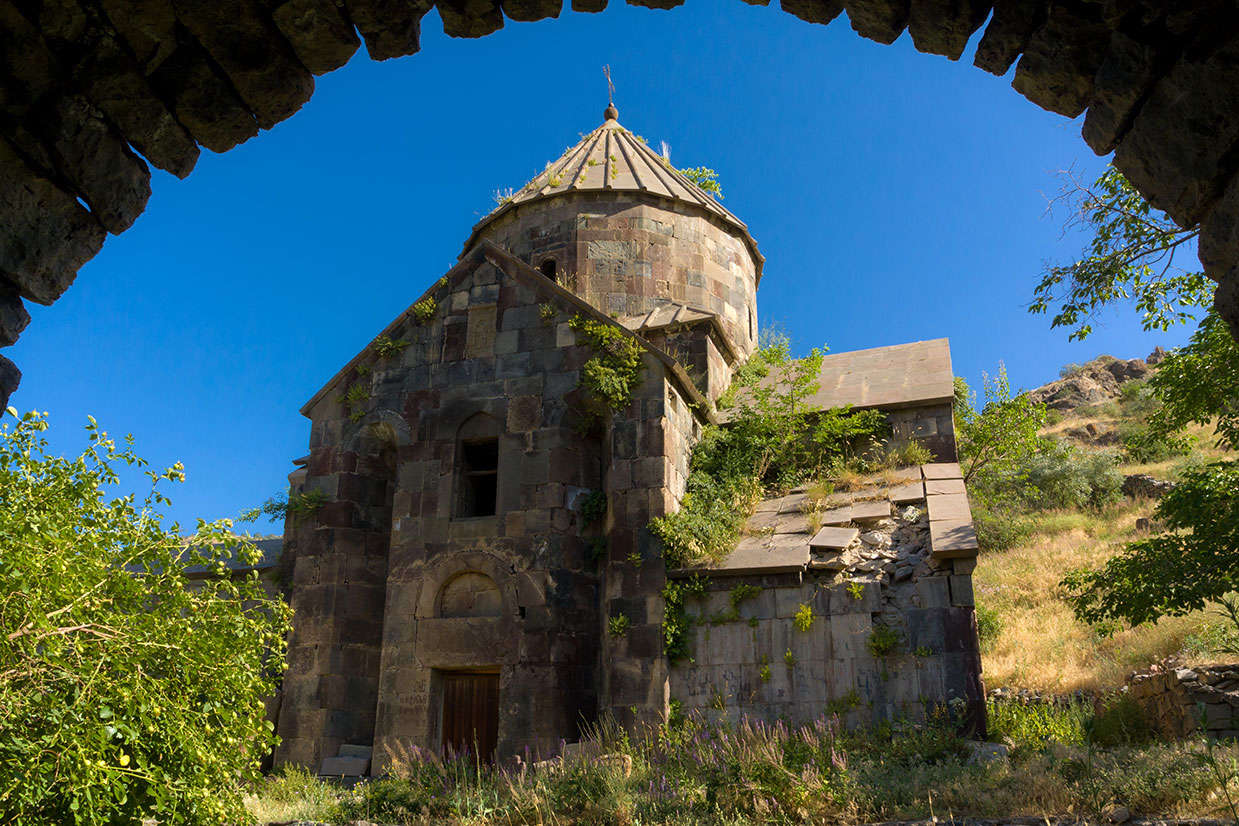 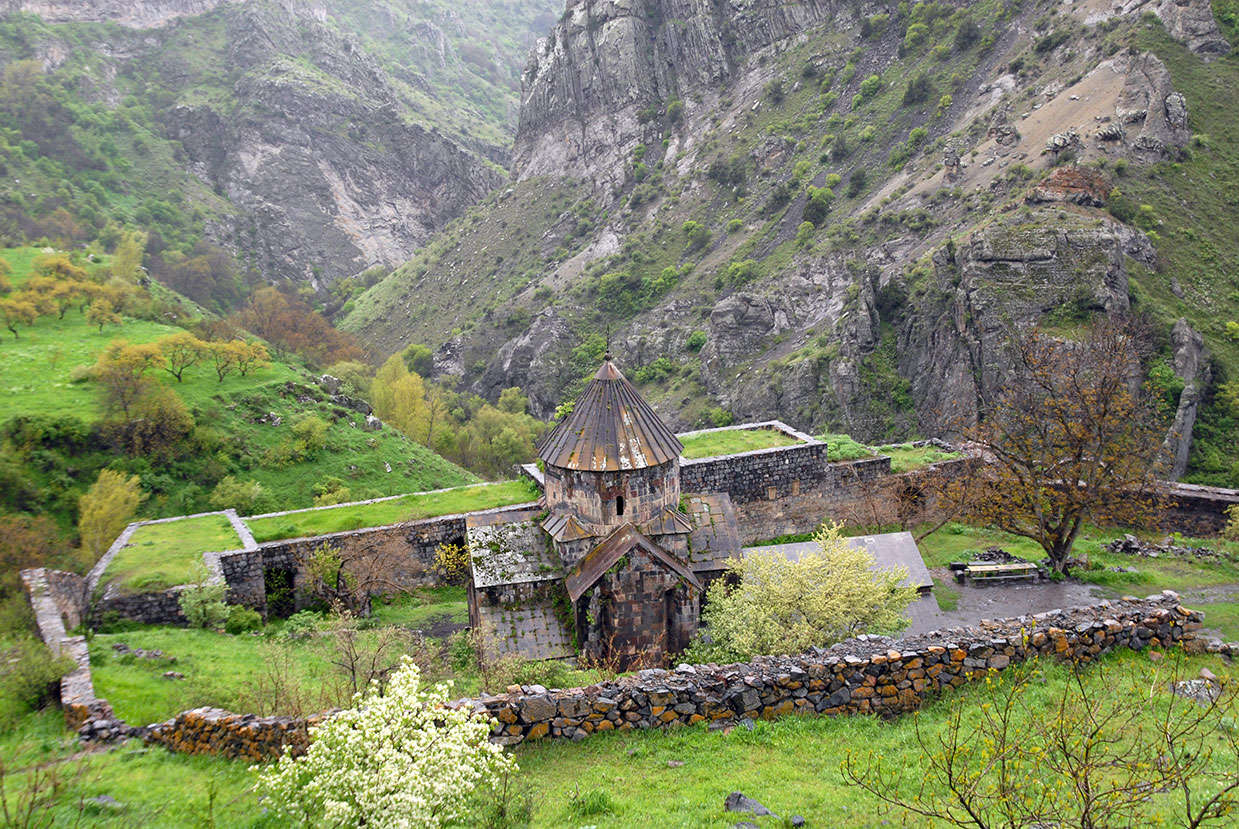 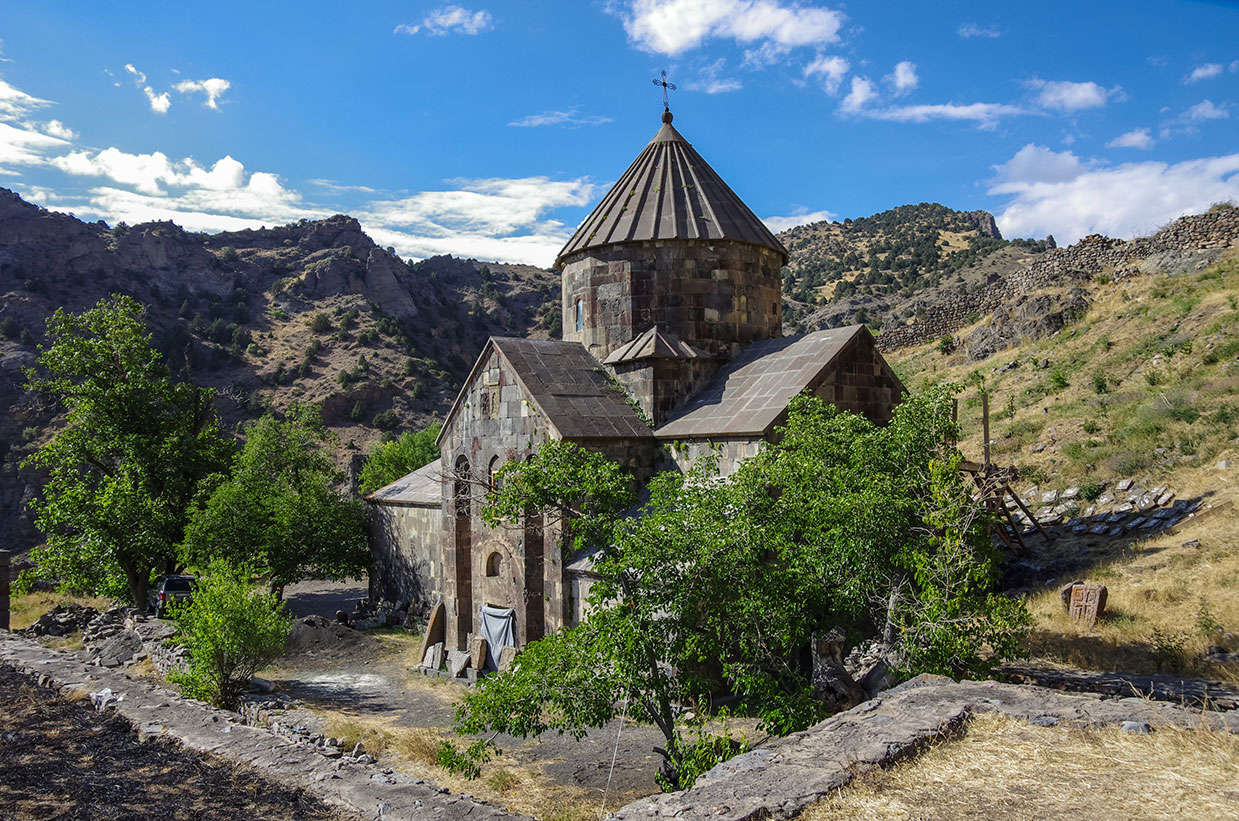 In a very unique environment, at the height of the bank of the River Arpa, the monastery of Gndevank is located. It is in a small village Gndevaz, in the region Vayots Dzor. From the side of the village, you can not reach the monastery. Gndevank is a very quiet place where you can not meet so many people. The core of the monastery has been restored, the outbuildings have been well preserved. The road to Gndevank crosses the valley of the big organs. A lot of great basalt organs stretch for several kilometres along the cliff face that overlooks the River Arpa. About 3 kilometers from the church, the rock known as "Vardan Mamikonyan" can be found. Near the church, there is a spring and a few picnic tables.

The monastery was built in 936 by Princess Sophia of Syunik. She explained the purpose of the construction of the monastery as follows: "Vayots Dzor was a ring without a jewel, and I built this monastery as the jewel for the ring." Priest Sargis was the first abbot of the church, and priest Yeghishe was entrusted with the responsibility for its construction. It was extended with a gavit (narthex) in 999. In the following years, the monastery was surrounded by walls under the direction of Abbot Petros. There are several legends about the founding of the monastery. Here is one of them. A young prince wanted to marry the daughter of Prince Smbat, Sophia. Sophia said she would only marry him if he won in a competition. The prince should build a canal in 40 days from the River Vorotan to Vayots Dzor. At this time Sophia was to build a monastery. On the 39th day, the prince gets a message that Sophia is almost done with the monastery. The father of the prince proposes a clever idea. The prince hung a white canvas at the place where it should be the canal. When it was windy, it seemed to be water. Since Sophia had no more money to complete the construction of the monastery, she sells her earrings (gind: earring, in Armenian). At this moment he got a message that the prince had already finished building the canal. Sophia looks out the window and thinks that it really was a waterfall. From disappointment, she climbs the dome of the monastery and throws herself into the abyss. The monastery was named Gndevank because it was built with the money from the purchase of Sophia’s earrings.

The monastery, which was damaged during an earthquake, was renovated in 1965 and 1969. The further renovation was carried out in 2013. In 1875, several items of religious utensils were found in a secret chamber of the church. Towards the gorge, there is a meter-high fortress wall. Along with this wall, there are monk cells, viewing pointsand weapon chambers, which can be visited. The complex includes St. Stephen’s Church, which is the most important building. The church was founded in 936. It is built in the shape of a cross-dome of four apses with a round tambour over a dome. There are four altars in the church. The gavit, which was added to the western part of the church in the following years, has the shape of a barrel. It is arched and looks like a tunnel approach to the church. Abbot Christopher built the vaulted hall with two chambers. Sargis, his successor, ordered the construction of a canal from the Vararakn River to provide a water supply for the church, which is still functioning.

Monastic housing was built on the southern and western sides of the connecting wall. One notable painting in the church is Mother Mary on the northern wall, considered a masterpiece of the late Middle Ages in Armenia. The surfaces of the pendentives are carved with images of the evangelists. The tombstones that surround the church, have interesting carvings, such as ibex hunting next to a hawk and the hunting for a boar. Khachkars (cross-stones) can also be seen here. The monastic complex is a very beautiful, attractive and frequently visited tourist destination in Armenia.