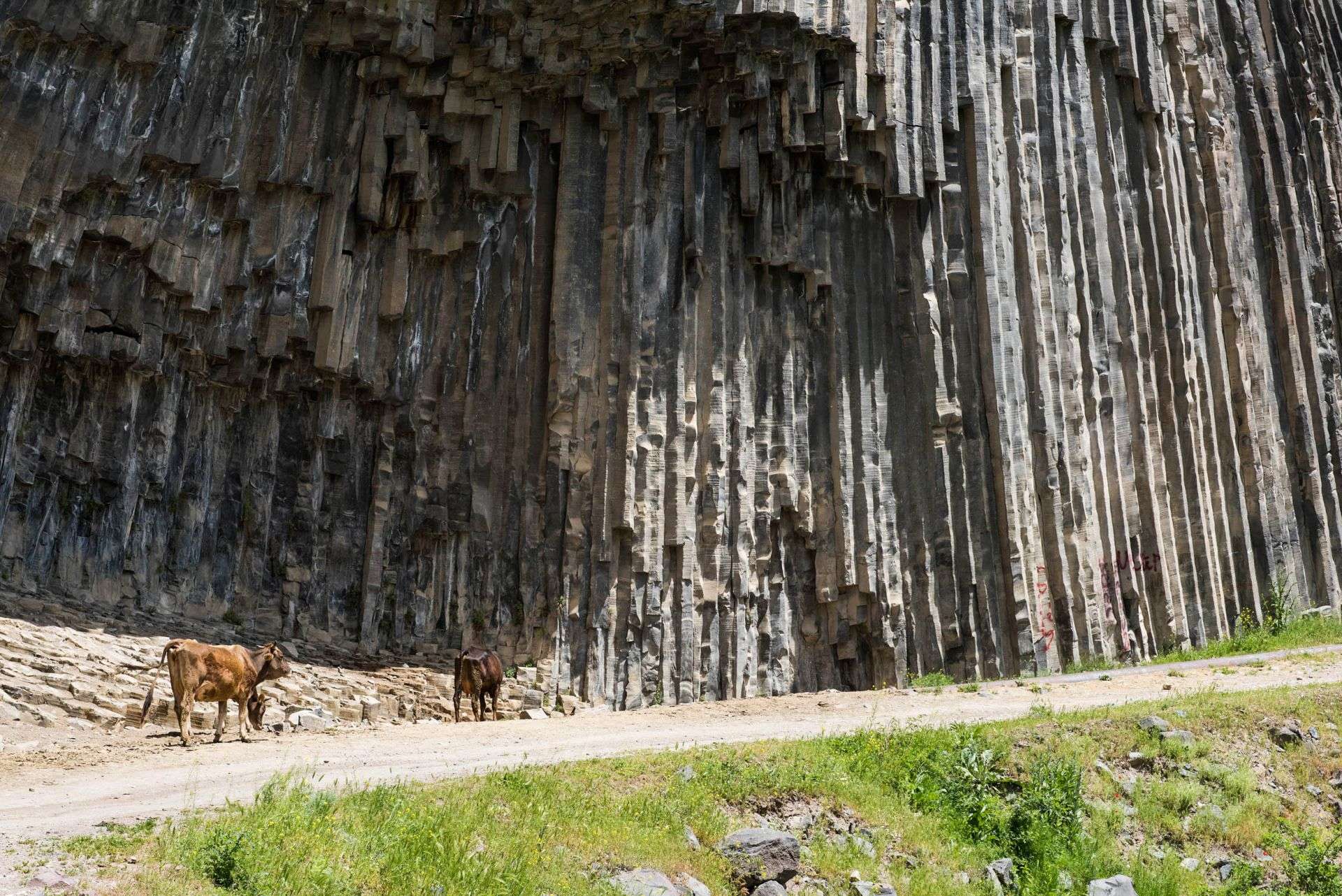 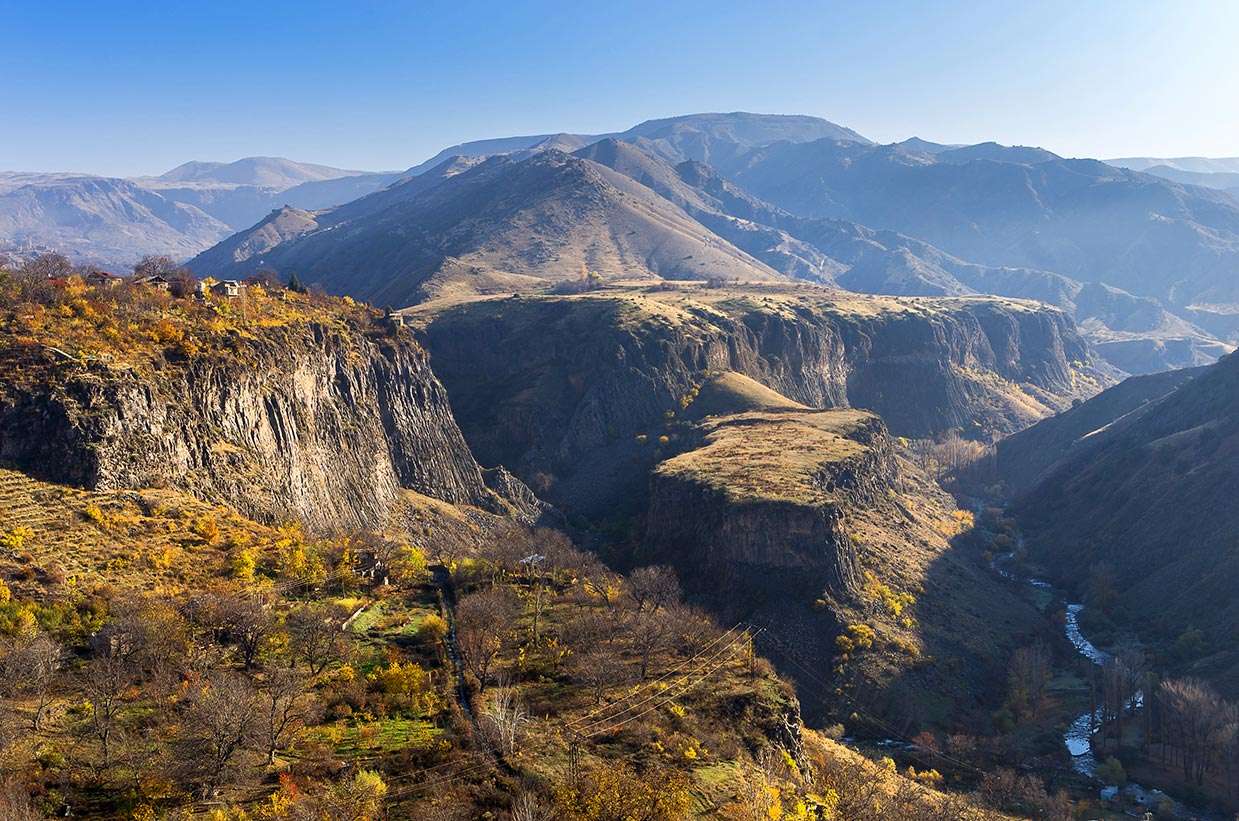 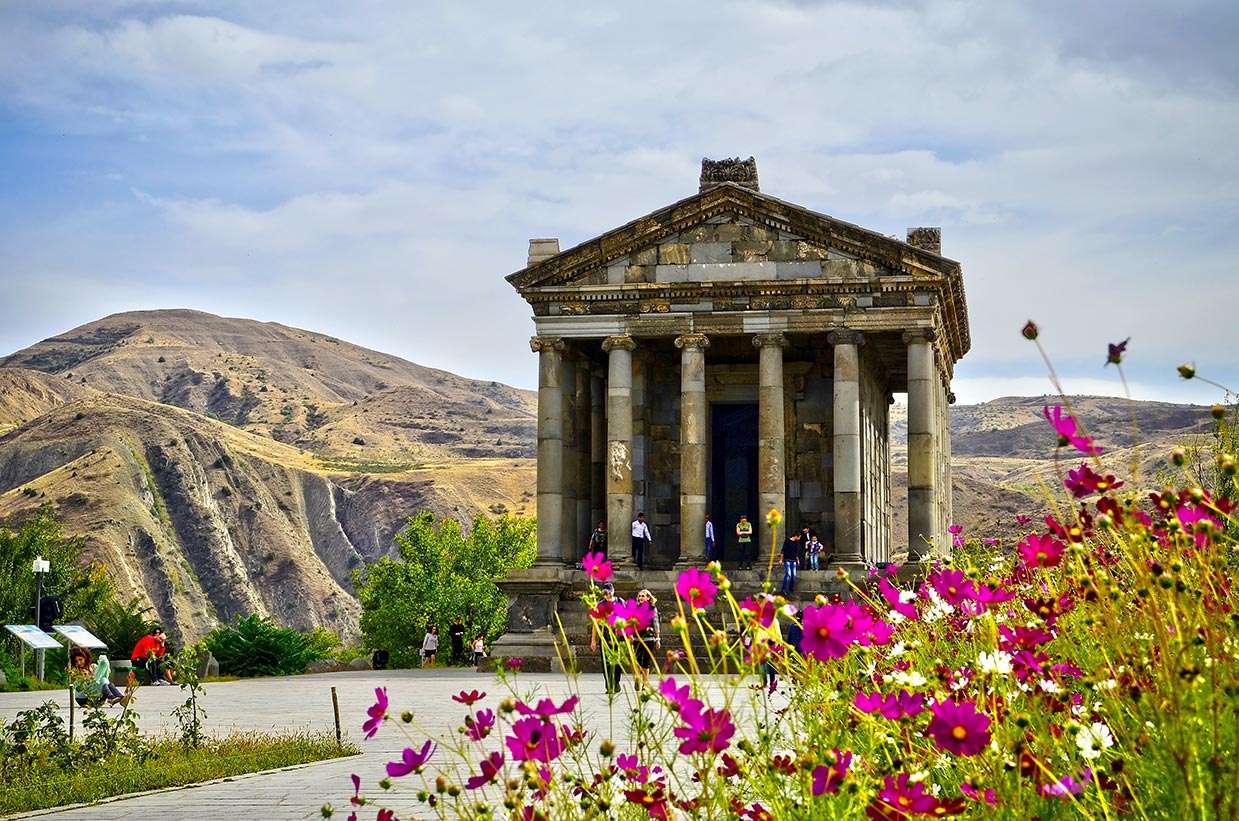 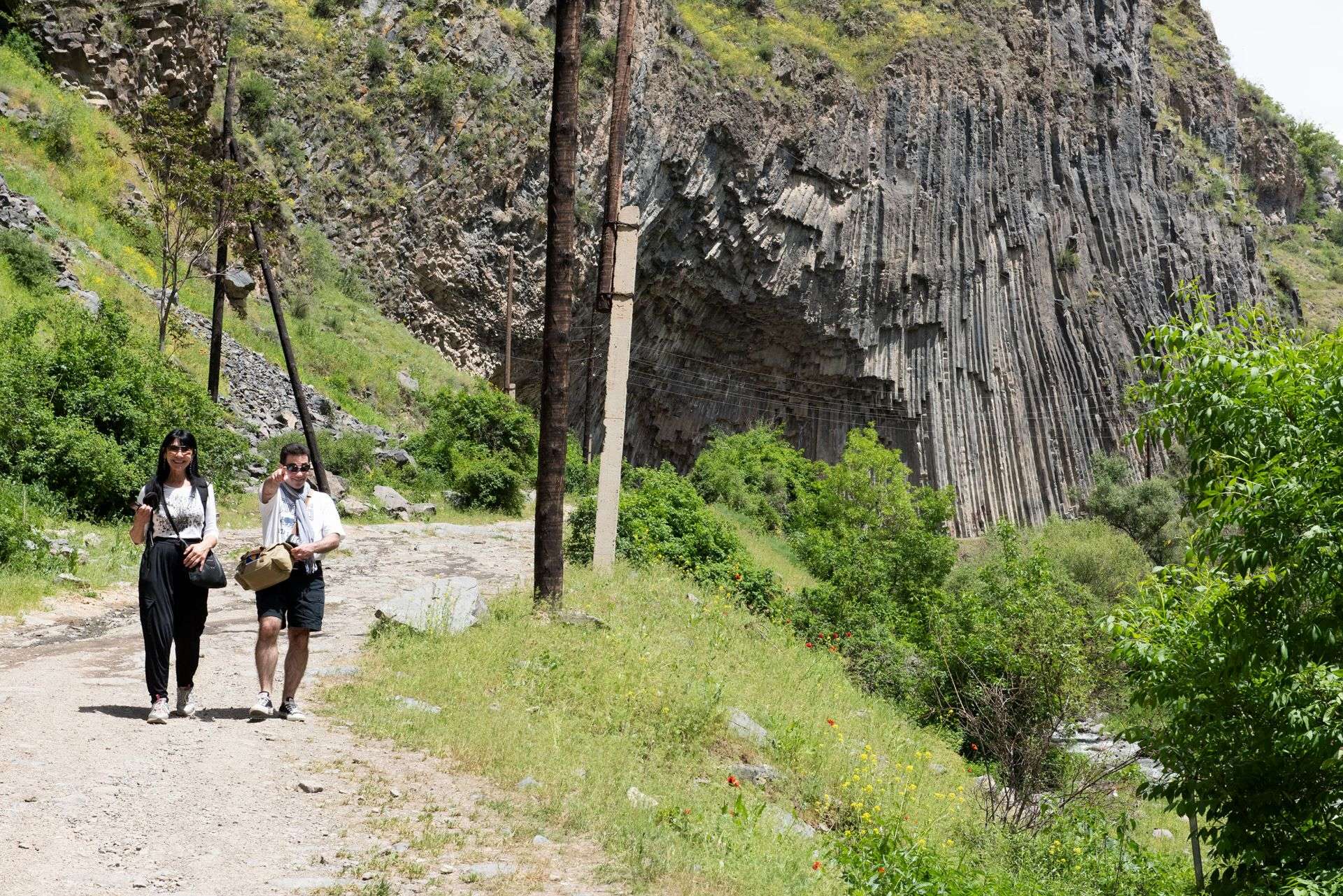 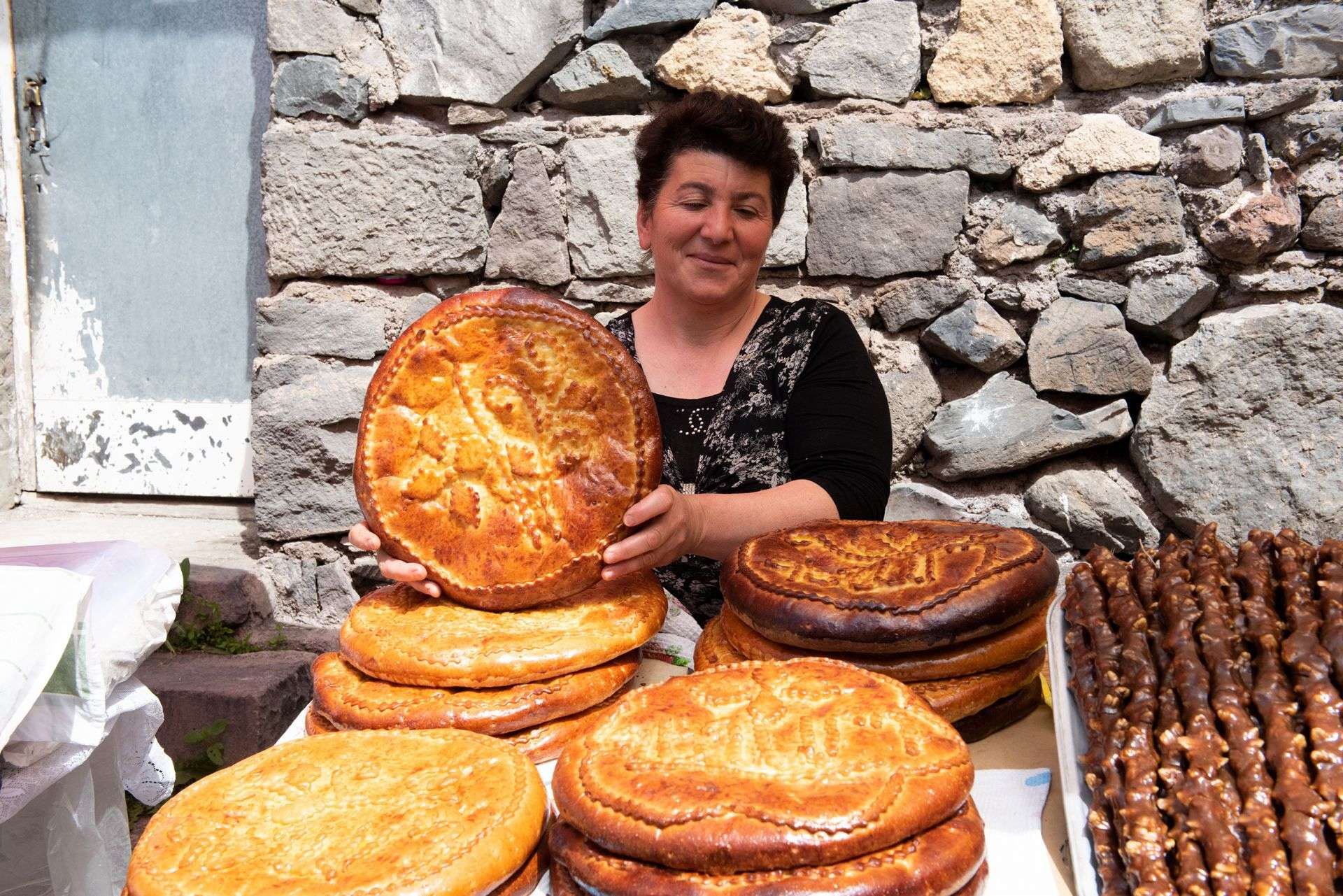 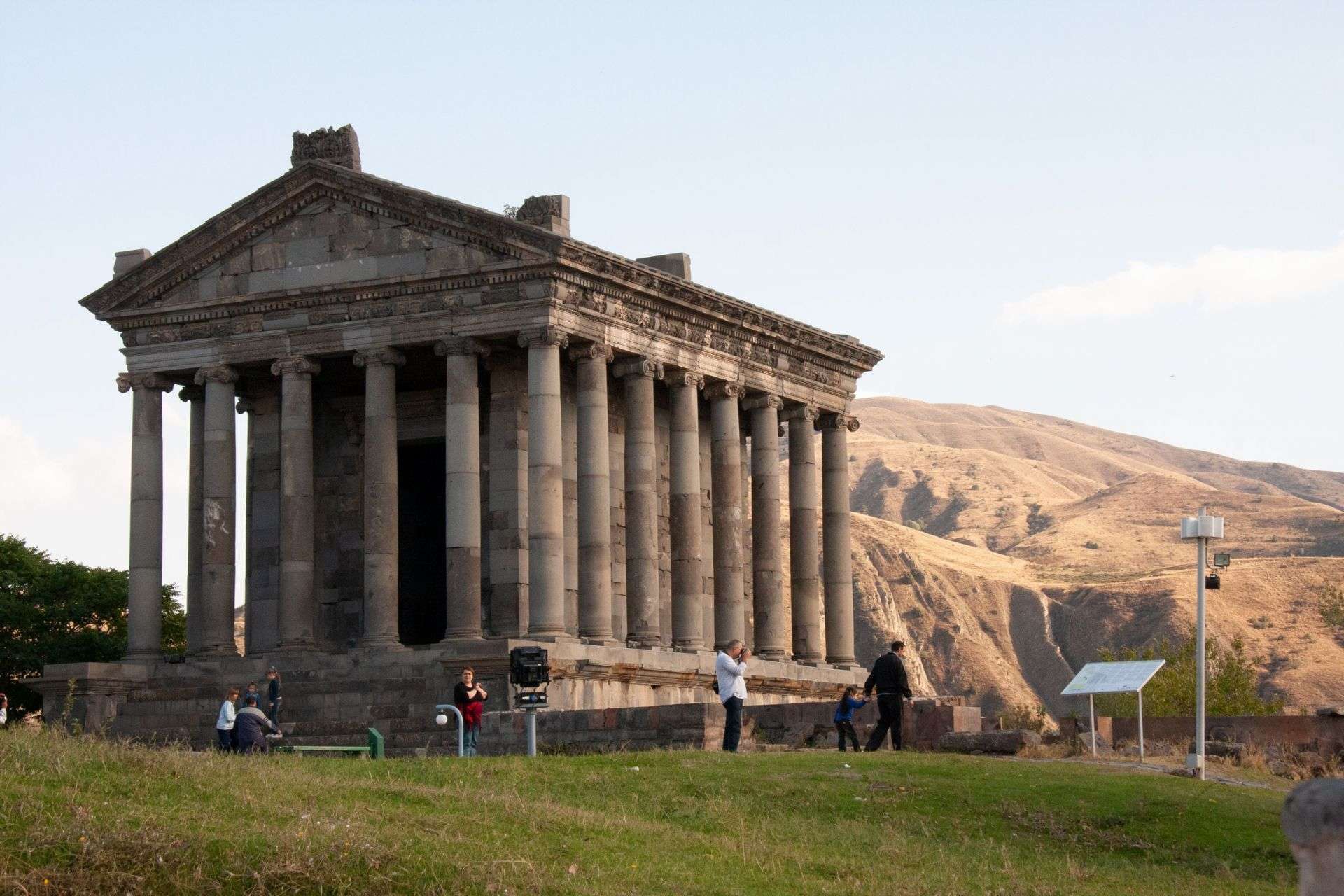 If you visit Armenia, the exploration of the Garni temple is a must. It is "the Acropolis of Armenia", which rises high in a beautiful area. Garni is also an important destination for the world history. It is an example of Hellenistic culture and architecture. The temple is located on the right bank of the Azat River, in the Kotayk region, about 28 km from the capital city Yerevan. Garni is the only Hellenistic monument in Armenia as the others were demolished, and in the place of Hellenistic temples were built Christian churches that stand nowadays. It is a Greco-Roman colonnade building from the first century. In the area, there are city walls and other buildings built by King Tridates I (77 AD). The temple has 24 pillars that symbolize 24 hours of the day. The facade is very beautiful and is decorated with lion heads. The building is made of basalt. After the Christianization of Armenia, the temple was converted into a royal summer residence. It was destroyed by an earthquake in the 17th century and restored in the 20th century.

Nearby the structure Garni Fortress is situated. During archaeological excavations, a Bronze Age settlement with dwellings and numerous objects were discovered. In the Urartian period (8th-6th century BC) the walls of the fortress were strengthened and the prototype of the first-century temple was erected. On the right side, on a lower hill, the foundations from the 3rd-4th centuries were discovered. They were used as buildings for the royal garrison. The garrison should protect the royal family in the residence and ensure their safety. During the excavations, Khachkars (cross-stones) were also explored in this area.

Another landmark that is worth seeing is the Dragonstone from the Bronze Age. Dragon worship was characteristic of pre-Christian Armenia. The kites, usually made of one-piece stone, came in fish-like shape and were placed on the water. Interestingly, they had a muscular tail with a snake, a bull, a stork and other animals. During the Christian period, most of the dragon stones were destroyed or used as a building material for churches. The temple was dedicated to Mithras, god of the sun. He was an Iranian deity, who was also worshipped in pre-Christian Armenia under the name Mher. Mithras is the equivalent of the Greek word "Helios", which means "sun" or "god of the sun". In various sources, the temple is referred to as "Helios Temple". The temple represents a Greco-Roman portico with columns. Nine wide staircases lead to the entrance of the temple. The Arabic inscription at the entrance of the prayer represents the conquest of the fortress and the transformation of the temple into a mosque.

The ancient Armenians lived in accordance with the rules of nature. The prediction of spring thaw and summer rain was more than magic. It had an immense importance for the survival of the culture. Perfected by the Pythagoreans in ancient Greece, sacred geometry was used to build the constructions around the Near East and Rome. This temple is the reflection of sacred geometry. The idea behind sacred geometry was to reunite humanity with the cosmic whole. The sacred numbers bore symbolic meanings.

Garni Temple is one of the most popular tourist destinations in Armenia. The beautiful area and rich history make this place more attractive and interesting. In the vicinity of Garni, you can also unveil the Geghard Monastery, which is inscribed in The UNESCO World Heritage Site. When visiting Garni, you should definitely visit Geghard. Therefore, the locals refer to it Garni-Geghard, as a single place.