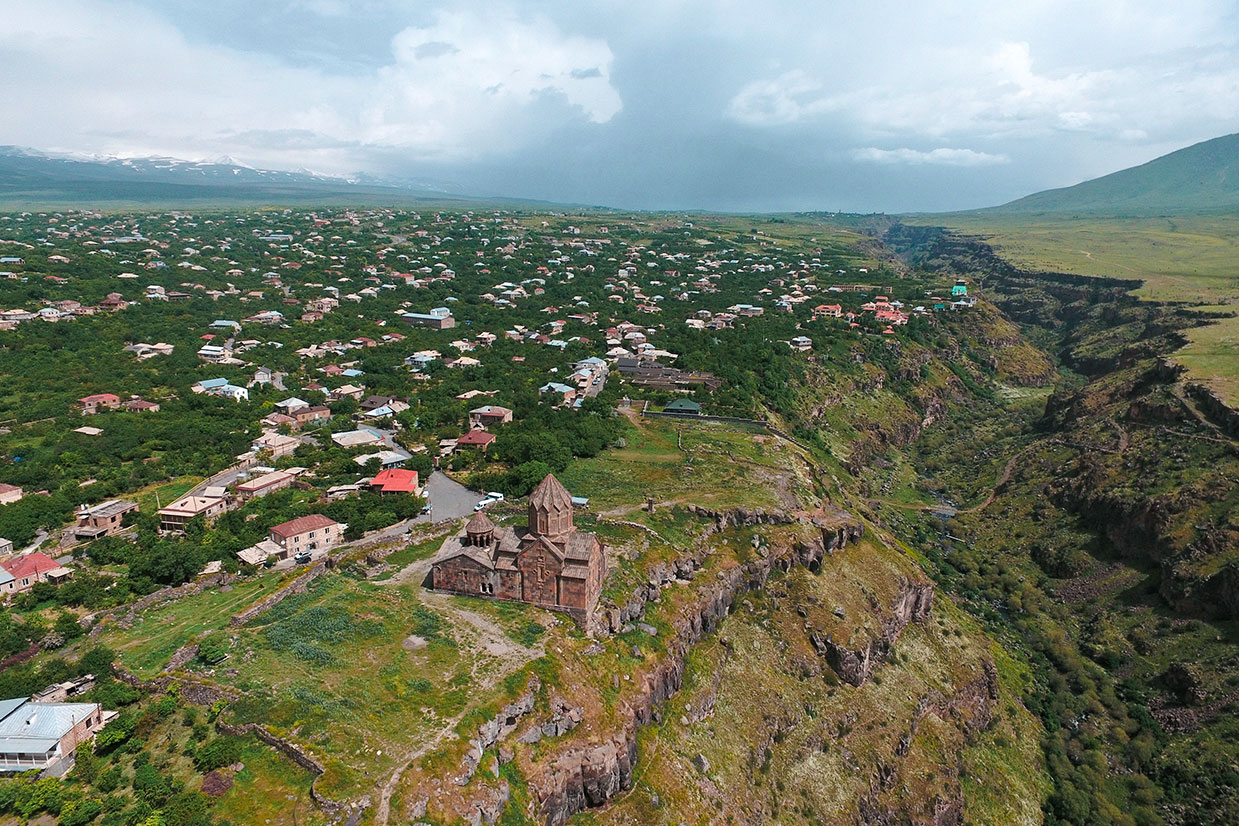 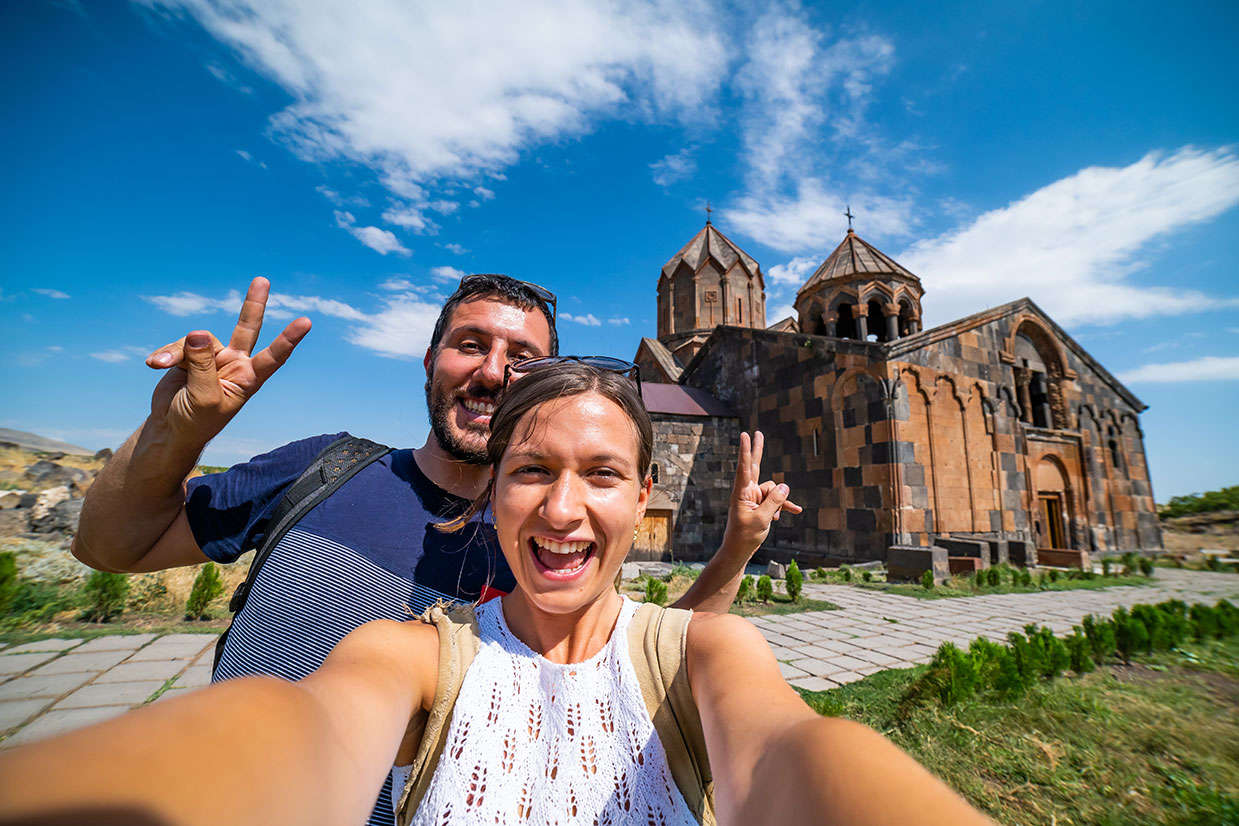 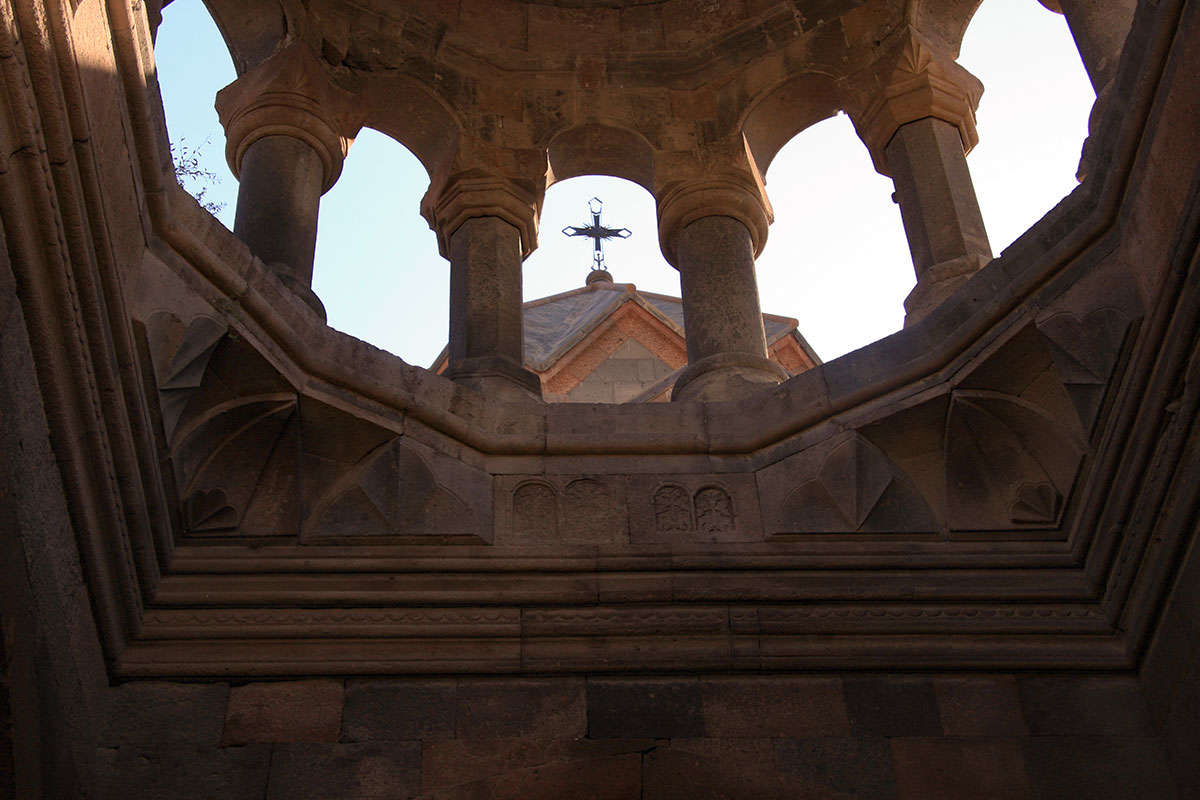 The monastery of St. John (Hovhannavank), dating back to the 4th century, is a gem of Armenian architecture. The monastery is located on the right edge of the imposing Kasakh Gorge, through which the Kasakh River flows, and is surrounded by mighty walls. The monastery is located in the province of Aragatsotn, near the village of Ohanavan. The oldest structure of the monastery is the 4th-century one-nave basilica of St. Karapet (the church is dedicated to John the Baptist), built by Gregory the Savior, who christened Armenia − the first Christian country in the world. The wooden roof of the church was replaced by a thatched ceiling in 554 and the basilica was completely renovated between 1652 and 1734. The main part of the monastery is the cathedral, which was built between 1216 and 1221 by the donation of Prince Vache Vuchutian. The cathedral has a cross-shaped layout with two-storey sacristies on each side of the church. The dome has an umbrella-shaped roof, which is typical of Armenian churches. Among the significant ornaments of the cathedral are carved scenes from the parable of the wise and foolish virgins.

In 1250 Vache Vachutyan's son, Kurt Vachutian built a narthex (gavit) next to the western wall of the cathedral. In the narthex, there are four base columns and a central hall (added in1274), which rests on twelve pillars. From 12th to 17th centuries, the monastic complex was known as a remarkable pedagogical and theological centre of Eastern Armenia, which had a scriptorium where manuscripts were created and illuminated.

In 1686, the monastery was fully described by the historian Zakaria Kanakertsi, who spent his whole life there. The walls of the monastery are covered with impressive lapidary engravings. A large inscribed text high on the north wall of one of the auxiliary structures of the monastery was engraved by Vachutyan brothers, another key inscription has left Konstantin I − the Catholicos of Armenia. The Hovhannavank Cathedral belongs to the category of "Gandzasar-like" churches, which were built approximately during the same period in different parts of Armenia and have similar compositional and decorative features (another example is the Harichavank Monastery). They include an umbrella-shaped dome, a cross-shaped floor plan, narthex (often with a ceiling decorated with stalactites) and high relief of a large cross on one of the church walls.

The narthex (in Armenian gavit, the inner church porch) is typical of the medieval architecture of Armenia. It served as a vestibule of the church, tomb and a meeting room. The earliest gavit style consists of an elongated vault, supported by double arches, with a skylight. This form was replaced by a square room with four columns divided into nine sections with a dome in the middle. The last construction consists of a gavit without columns and with vaulted ceilings. On the west side of the church of the Holy Redeemer, in Sanahin Monastery Complex, there is a gavit built in 1181, which has four large and free-standing inner columns supporting the arches. The columns and their pedestals are ornately decorated. The gavit of the Church of Our Lady is a three-aisled hall with lower arches and less elaborate decorations on the columns.

Hovhannavank was repeatedly restored after the earthquake of 1679 and thus has a second upswing. A new earthquake in 1918 destroyed the drum and the south facade of the church. The restoration work has been going on since the 1990's.