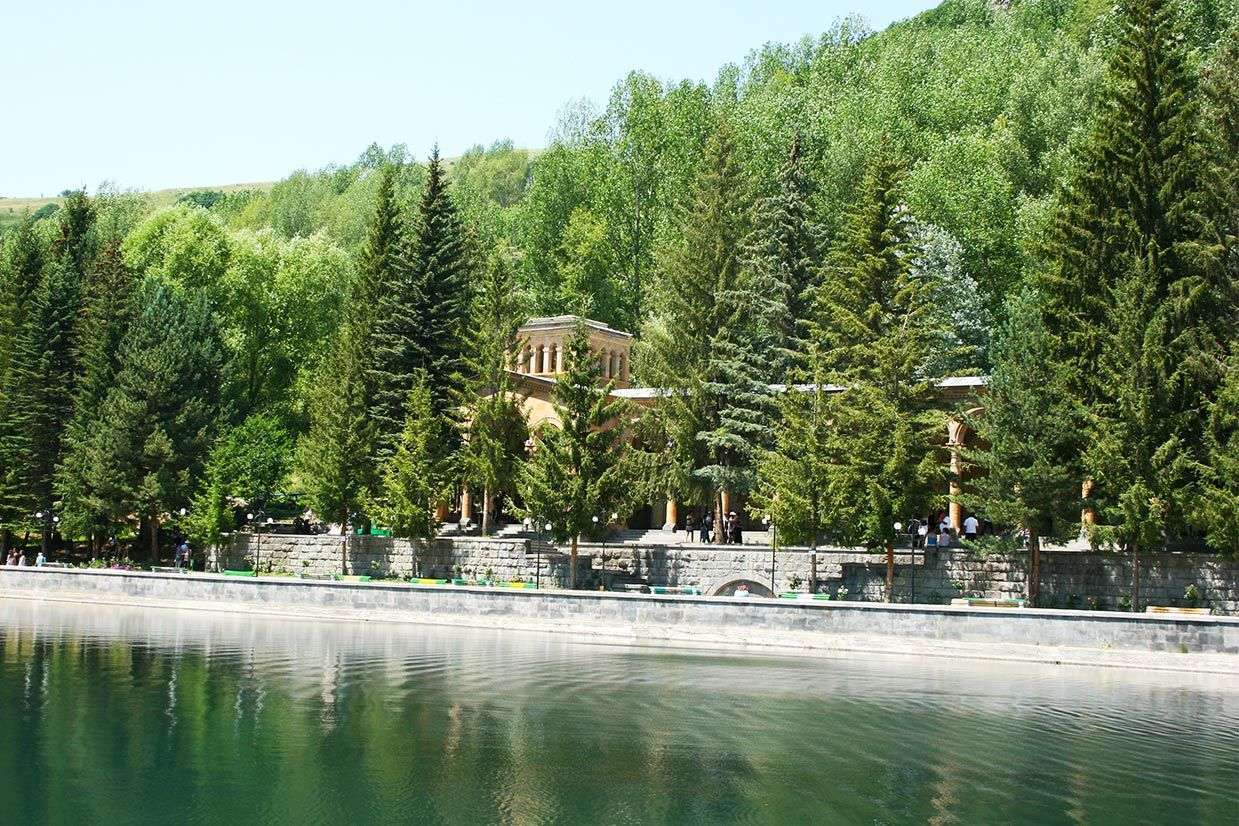 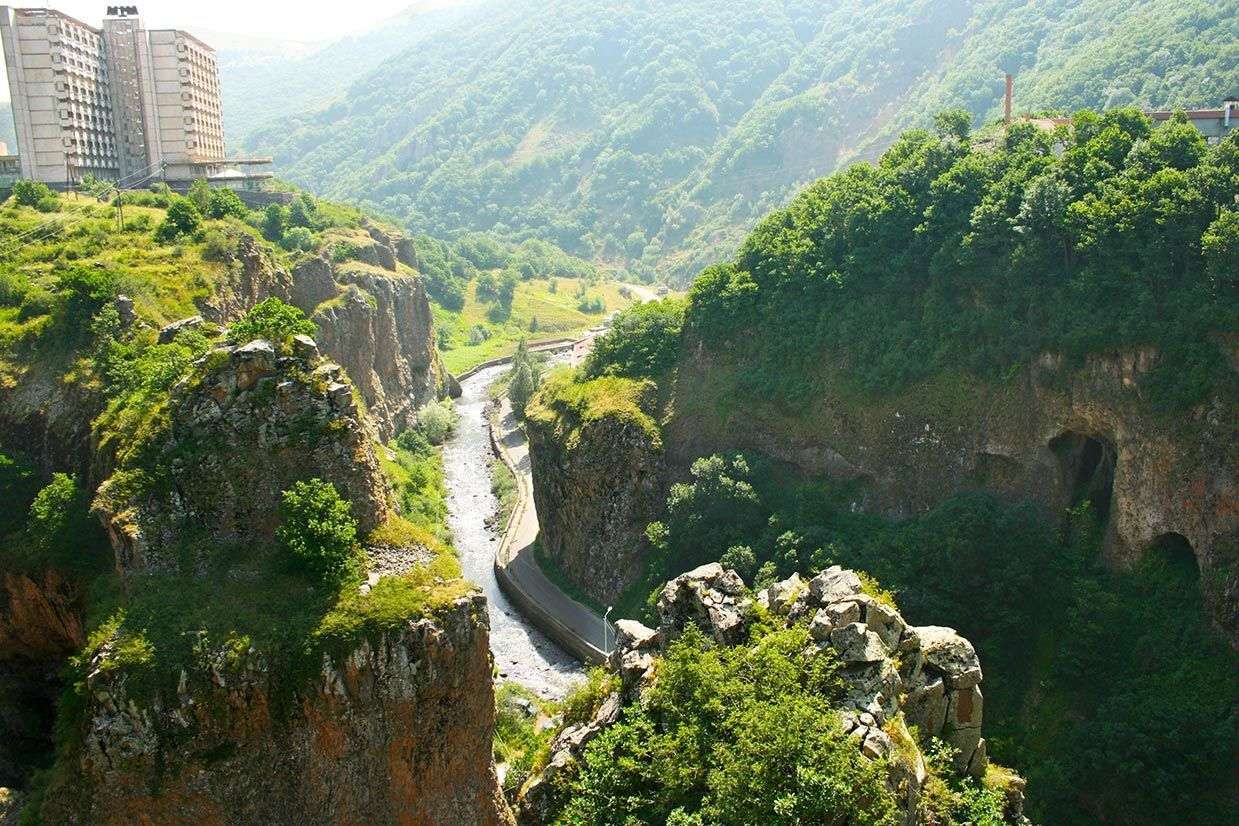 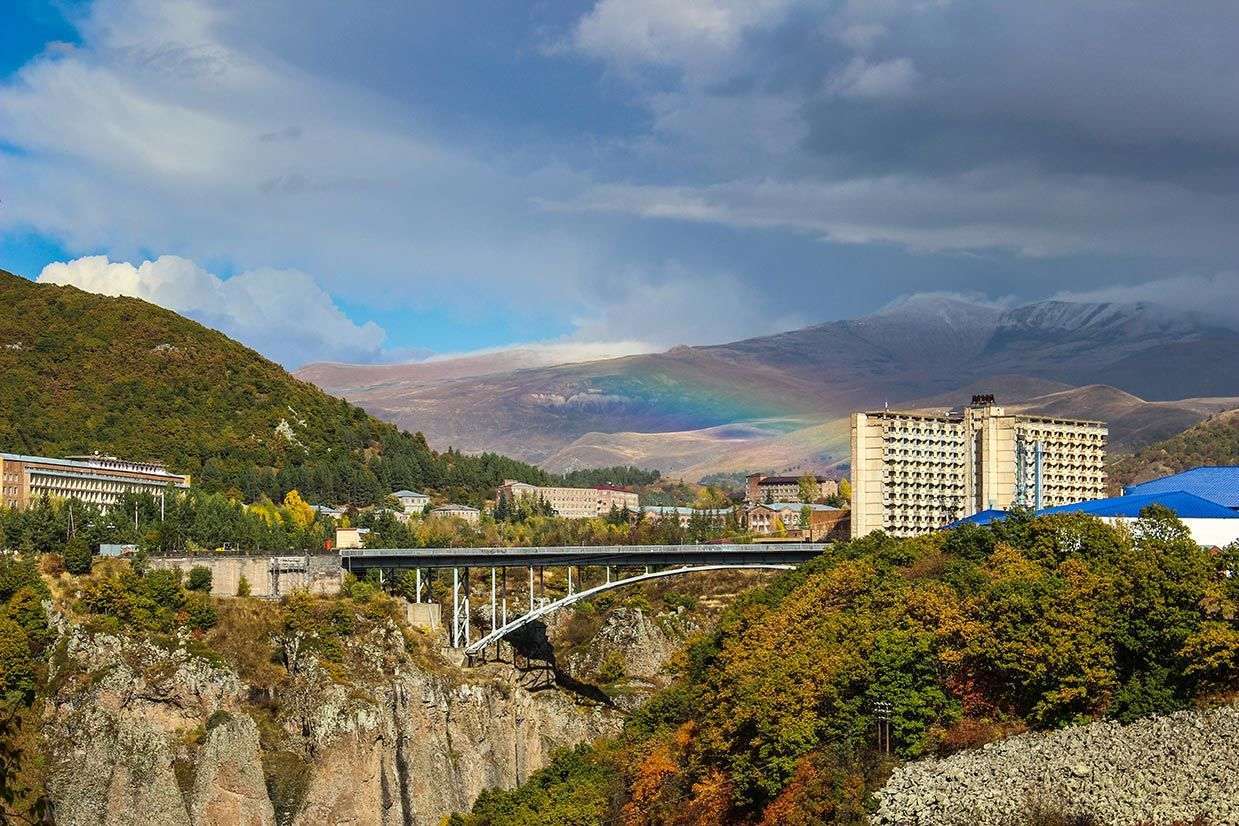 Jermuk, "the Armenian Leukerbad", is a well-known health resort in the scenic province of Armenia − Vayots Dzor. The whole area is known for many hot springs. As late as the Soviet era, this was a resort popular throughout the USSR. The resort is located at the sources of the river Arpa, which supplies a lot of water to Lake Sevan. The temperature of the sources is between 33° and 65°. The bottled water of Jermuk is one of the most popular mineral waters in Armenia. Jermuk is also attractive for its fresh air, waterfall, artificial lakes, hiking trails, the surrounding forests and mineral water pools. The city is being developed into a modern tourism and health centre. The name of the city derives from the Armenian word "jermuk" and means "warm mineral spring". The first time it was mentioned in the 13th century by the historian Stepanos Orbelian in his work "History of Sisakan Province".

Jermuk occupies an area historically owned by the Canton of Vayots Dzor of Syunik Province in Mets Hayq (Greater Armenia). The remains of the ancient cyclopean fortress and the ruins of an 8th-century basilica are witnesses to the fact that the area around the Jermuk fountains had been inhabited long before the 13th century. The princes of Syunik regarded the mineral springs of Jermuk as healing and built several pools filled with it, thus making the small town their holiday destination.

At the beginning of the 16th century, Eastern Armenia fell under the Safavid Persian rule. This period is considered the darkest in the history of this region. It was often a battlefield between the invading forces of the Turkish peoples and the Iranian tribes. As a result, many important monuments were destroyed and the population was expelled. After the war between the Russian Empire and Persia (1826-28), many areas of eastern Armenia - including Vayoz Dzor - became part of the Russian Empire. Under Russian rule, the city of Jermuk experienced significant growth and development. In the 1830's, Russian geologist G. Voskoboynikov arrived in Armenia and began exploring the geographical depth of Jermuk, as well as the content and characteristics of the waters of Jermuk. His observations were the first scientific talks about Jermuk. In the 1860's, all of Jermuk's historic swimming pools built by the Orbelian princes of Syunik were renovated following a decision by the Russian government. After the Sovietization of Armenia, Jermuk and the surrounding areas became one of the regions that resisted Soviet rule and, under the leadership of Garegin Nzhdeh, formed the unrecognized Republic of Mountainous Armenia. In July 1921 Bolsheviks won and Jermuk became part of the Armenian Soviet Socialist Republic.

There are many interesting landmarks in the town. The town church of St. Gayane was consecrated on 17 November 2007. It was built by the donations of the businessman Ashot Arsenyan. The architect of the church is Samvel Aghajanyan. Ancient Bronze Age caves are located in the Arpa Gorge north of Jermuk, along with a group of small medieval chapels. The 10th-century Gndevank Monastery is one of the most attractive destinations in the area. It is just 10 km west of Jermuk. The forests of Jermuk are rich in oaks and hornbeams, as well as dogrose, wild pear, plum and juniper. Animals like foxes, rabbits, badgers and bears can be found there. Tourism plays an essential role in the economy of Jermuk. Here, many development plans have been used in recent years to further develop the city as a summer resort and winter tourist destination. Jermuk is always waiting for new tourists who travel to Armenia.